When it comes to using headphones, I'm a big fan of the crossfeed effect. I'm not sure if it really reduces fatigue (I haven't seen any studies on this topic), but it definitely helps in "pushing" the sound out of the head, and helps to perceive spatial cues of good stereophonic recordings the same way as it happens when listening on speakers.

For a long time I was using the BS2B plugin inserted into the output chain of Pulse Audio on Linux. And I was pretty happy with it until I bought O2 headphone amplifier / DAC. One for the defining features of this amplifier is a very low output impedance which helps in reproducing bass frequencies faithfully (see the NwAvGuy's explanation why excessive output impedance rolls off bass frequency response). Coupled with Beyerdynamic DT770 headphones, this had revealed a huge defect in the BS2B plugin -- its overly aggressive bass amplification, as a result of mixing in bass frequencies from the opposite channel (the essence of crossfeed).

I changed BS2B's setting to the most conservative "650 Hz, 9.5 dB" -- this helped to reduce the devastating effect of the bass amplification, but had almost moved the sound back into my head. I started looking for alternatives.

Now I've got a new problem -- being used to the natural sound of Phonitor's crossfeed, I started to lack it when I was away. The Phonitor (even "mini") is definitely not a portable device. I ended up buying a second Phonitor mini, so I can use it both at home and at the office, but this still didn't solve the problem of listening on the go. Also, I didn't want myself to be locked in into using Phonitor headphone amps exclusively.

I started looking for other crossfeed plugins besides BS2B (portable headphone amplifiers with crossfeed are still a rarity and add some inconvenience to mobile setups). What I discovered, is that there are basically two kinds of crossfeed plugins: one class of them is based on the same ideas as BS2B (the original idea explained by Bauer in 1965, then extended and improved by S. Linkwitz, Chu Moi, and others), and the other class uses HRTF and room simulation (ToneBoosters Isone, adv_xfeed) and even add head tracking (WavesNx). Plugins from both classes does not sound the same as Phonitor's crossfeed -- not as natural I would say. Especially the plugins that try to actually simulate a pair of speakers in a room -- the sound that they produce definitely isn't intended for enjoying music. 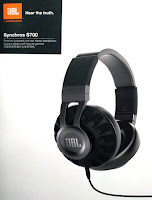 One crossfeed implementation I've encountered that stood out from the others was in JBL Synchros S700 active headphones. This implementation also sounds quite natural, but it is can't be separated away from these particular headphones, and enabling it also enables a built-in equalizer, which adds tonal coloration that I didn't like.

So I finally decided to figure out what is so special about the Phonitor's crossfeed, and whether it's possible to reproduce it in a digital form so it can be used on the go, with any DAC, amplifier, and headphones.

RoomEQ Wizard (REW) is an indispensable tool when it comes to room and loudspeaker acoustic analysis. But it can be used for analyzing any sound chain. I decided to look into the characteristics of the crossfeed filter in BS2B plugin, and compare it with the filter of Phonitor Mini.

There are 3 characteristics that are useful when analyzing how a filter affects audio signal:

The crossfeed filter mixes into each direct channel sound from an opposite channel, thus these characteristics need to be specified twice: for the direct and mixed-in signals.

In fact, the page of the BS2B filter shows the frequency response and the group delay graphs on Figures 2.1 and 2.2, respectively. The blue lines are for the direct channel signal, and the red lines are for the opposite channel signal. E.g. if we consider the left input channel, the blue line on the graphs shows what the filter outputs on the left output channel, and the red line shows what the filter outputs on the right output channel, mixing it with the original signal on the right channel. The green line on the frequency graph shows the frequency response if both input channels receive the same input--then what you get on each channel is the sum of the direct and the opposite signal. As we can see, the BS2B filter indeed boosts bass frequencies.

Note that the graphs shown on the BS2B filter is theoretical response. I decided to measure the actual response with REW in order to be able to perform apples-to-apples comparison. Here I encountered one shortcoming of REW--it is designed for real-time measurements and doesn't support loading of stimulus and response sound files for static analysis. But this can be worked around. I used REW's Sound Generator dialog for saving the signal called "Measurement Sweep" as a .wav file (this is the same signal that REW uses for real-time analysis). This file contains the sweep in both channels, and I replaced the right channel with silence in order to be able to consider one input channel alone.

Then I processed this sweep .wav file (the stimulus) with bs2bconvert and obtained the response .wav file. I split this stereo file into two mono files containing each channel separately.

Now I had to trick REW into believing that it's doing a real-time analysis. For that, I used Rogue Amoeba's Loopback app (on Mac). Loopback allows creating virtual sound devices that can work like pipes. I assigned the loopback device to be the default sound output, and specified it as an input in REW. Then I opened the left channel response .wav in VLC, started REW's measurement process, and clicked Play in VLC. And it worked--REW accepted the played back .wav as a response of the system under measurement. Then I repeated the same steps this time playing the right channel response .wav.

Here is the frequency response graph of the BS2B filter (the measured response as opposed to theoretical) with the default settings "700 Hz, 4.5 dB": 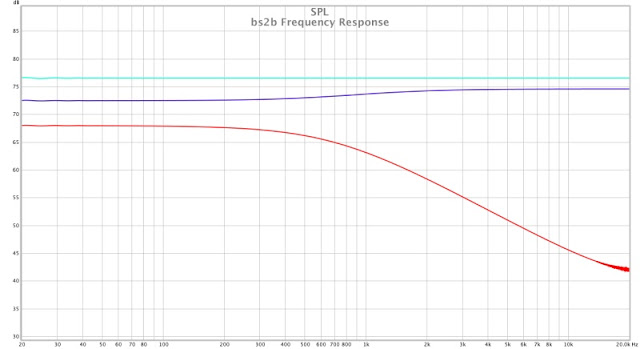 The light blue line is the original sweep signal, so we can see how signals are attenuated. It can be seen that the filter is a bit noisy on the opposite channel (red) at the very end of the spectrum, but I don't think this can actually be heard.

This is the phase response of the filter: 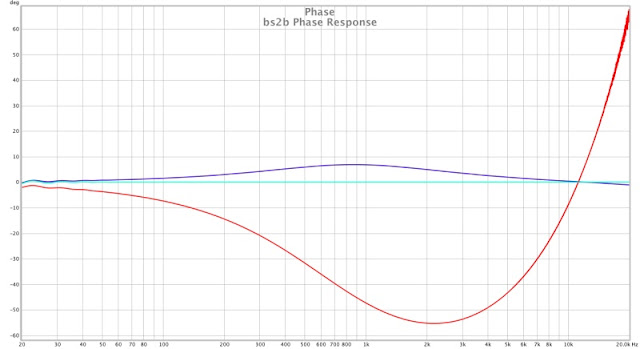 Phase is almost left unchanged for the direct channel (blue), but is bent for the opposite channel (red). Again, some jitter is visible in high frequencies.

And the group delay: 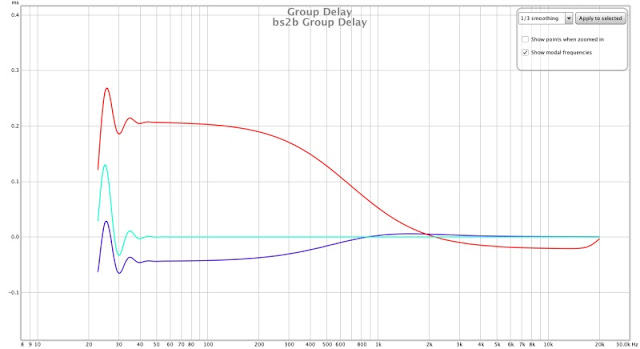 Note that wobbliness in the beginning is probably an artifact of REW's processing--it shows up even on the original sweep (light blue) which is supposed to be flat. I had to smooth up the graph by 1/3 octave because group delay, being a derivative is very sensitive to any jitter in the phase response (and there is actually some jitter at low frequencies on the phase response graph above).

It can be seen that the opposite (red) signal is delayed in the bass region for approx. 200 microseconds (0.2 ms), and the direct (blue) signal goes forward by 50 microseconds (0.05 ms), forming a 250 microseconds delay for frequencies below 1000 Hz which is supposed to provide binaural cues for the sound source localization.

Measuring Phonitor mini with REW is a straightforward task--just need to connect it criss-cross to a sound card. The crossfeed matrix of Phonitor has different settings: processing strength, emulated speakers angle, and center channel attenuation. I used the following settings for the measurements: medium strength, 30° angle, -1.2 dB attenuation. 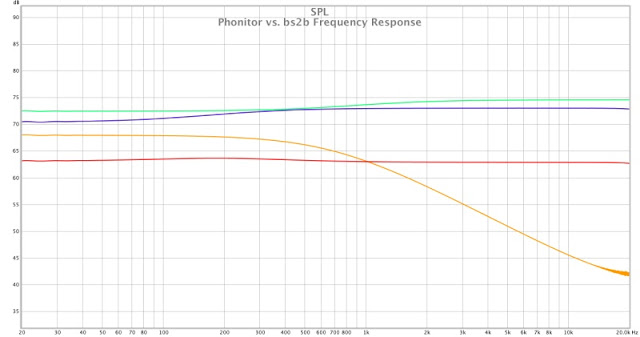 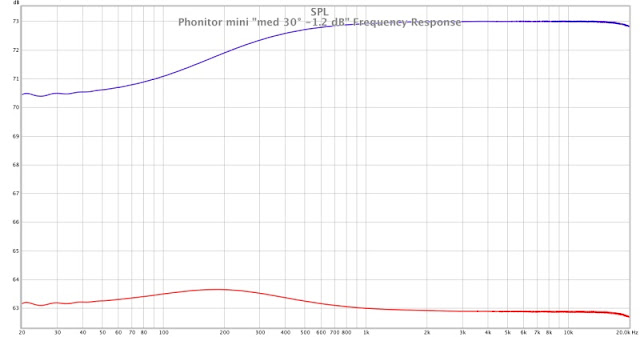 On the direct channel, the swing of the highpass filter is only about 2.5 dB,  and on the opposite channel, there is a small peak of about 0.5 dB, and slight attenuation of high frequencies. 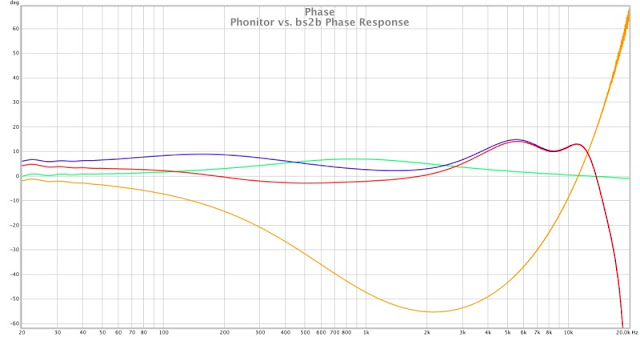 Phonitor's alteration of the phase (direct and opposite) is much more uniform than BS2B's and doesn't exceed 15° for frequencies below 10 kHz.

And the group delay (1/3 octave smoothed): 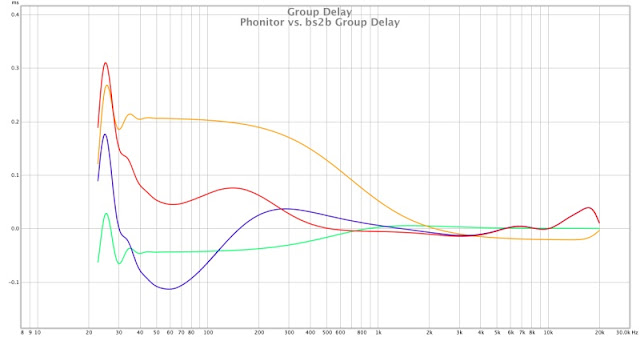 The overall conclusion is that Phonitor's implementation of crossfeed affects the source signal very slightly compared to BS2B's implementation. No wonder it reproduces the original headphones sound much more faithfully.

From the phase response graph of Phonitor mini, it can be seen that there is nothing complex in the filters used for both the direct and the opposite channel. The only issue is how to guess the exact parameters for them. For that, I used an iterative process, starting from initial guesses, measuring the result, and comparing it with the Phonitor's graphs (REW's Overlays dialog is an ideal tool for this task). 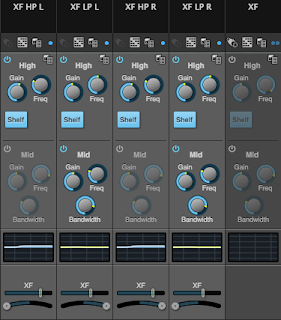 I used DSP built into Motu UltraLite AVB sound interface. The interface features freely configurable routing matrix, and a 4-band bi-quad equalizer per channel. For each of input channels, first I duplicated them into direct / opposite pairs, and then mixed together the direct from one channel and the opposite from another channel. Below is the configuration of the equalizer I ended up with:


How does the resulting filter measures up? Here is the frequency response in comparison with the Phonitor's filter: The DSP filter (direct and opposite) features a bit different slope for the direct channel (and is somewhat more noisy at high frequencies). The opposite channel filter features the response very close to Phonitor's.

Here is a comparison of phase responses: 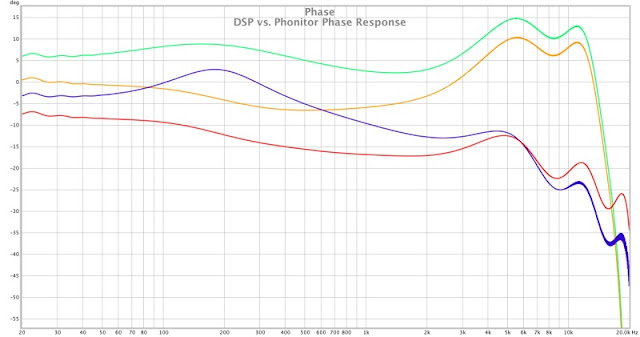 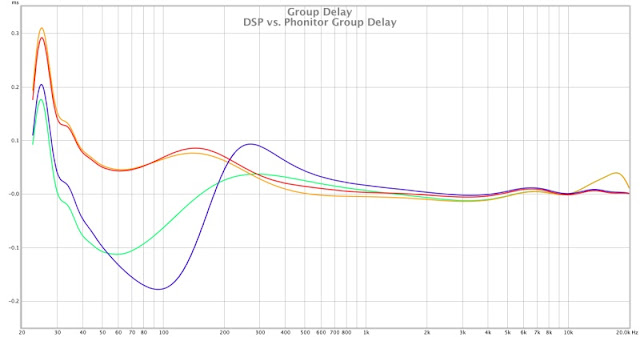 Again, Phonitor's direct channel group delay (green) is much smoother than of my reconstruction
(blue). But the opposite channels match almost exactly.

So yes, there is no magic in Phonitor's crossfeed, it's just different from what the majority of other implementations use. However, note the quality of the filters--analog (!) filters in this amplifier box. After this study, the high price of Phonitor has been fully justified for me. Recall that all the other characteristics, like signal-to-noise ratio, distortion, and the output impedance of Phonitor mini also meet very high quality standards, and with the crossfeed filter turned off it is fully transparent in the signal chain.

Enough with measurements, it's interesting whether the DSP implementation actually sounds the same as Phonitor's. I took a free sound track of african safari drums recording that was used by Dr. Meier for demonstrating the effect of crossfeed in his Corda amplifiers. This track features drums that are sometimes panned extremely to one side, and when listening without crossfeed this actually induces a physical discomfort.

I have prepared 3 recordings of this track. All of them were played on the Motu UltraLite interface, passed through SPL Phonitor mini, and then captured back again using Motu. The difference was in whether crossfeed is activated, and on which unit.


Then I was playing the tracks back via O2 headphone amplifier / DAC in Beyerdynamic T90 headphones, and used Lacinato ABX comparator tool. This is a really great tool, as it allows applying fine tuning of attenuation and time offset to the tracks under comparison, enabling seamless switching between them (such alignment is a must when doing blind tests, as even a slight difference in output levels can provide a clue for distinguishing between the tracks).

I was able to distinguish correctly between the tracks 1 and 2 with a great confidence--14 times out of 15. Then I tried to distinguish between the tracks 2 and 3, and my attempts were not better than a pure guess--8 times out of 15. This proves that crossfeed is not just a mind trick, and my DSP implementation closely imitates the one in Phonitor (with the settings stated above).