Last week, thanks to a Massdrop offer, I've got a pair of JBL LSR 305 powered monitors just for $99 per unit. I've bought them with an intention to add to my current 2.1 setup consisting of KRK Rokit RPG5 G2 monitors and KRK 10s sub, plus Cambridge Audio GO portable speaker for the center channel.

So now I've got two pairs of monitors, and needed to choose which ones put to front and which ones to back. I decided to make some measurements in order to support my decision, and I think, since these are really cheap speakers, the results may be interesting to a wide group of people. 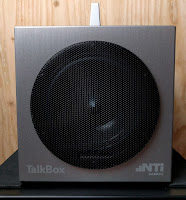 I could only perform the measurements at my apartment, and it has absolutely no acoustic treatment, thus the speakers obviously would not behave as in an anechoic chamber or in free field. So in order to have some reference, I borrowed NTi TalkBox—an amazing reference speaker with absolutely flat response in the range from 100 Hz to 10 kHz.

The two characteristics of the speakers that were of great interest for me were: frequency response and... frequency response again, but with measurements taken from different angles in a horizontal plane. The reason is that I usually watch movies with family, and everyone on our couch should have a change to be in a "sweet spot". So for front speakers I would choose those that exhibit more even response on angles, while for rear speakers it doesn't matter as much since they are positioned much closer to the listeners, and hence more directional.

Below are 1/3 octave averaged frequency responses of JBL, KRK, and NTi speakers taken at the same location, from 1 meter, on axis, with all tone controls on JBL and KRK speakers being set to neutral positions:

Obviously, the wiggles in the range from 100 Hz to 1 kHz are due to room modes—they are almost the same for all 3 speakers.

Some interesting conclusions I've got from this graph:

It still remains a mystery to me why NTi graph has this bump centered at about 9.5 kHz, my current theory is that maybe it is revealing the imperfections of the measurement microphone (miniDSP UMIK-1). I've tried directing the microphone both straight into the speaker and downwards (and choosing an appropriate calibration file), but the bump was still there.

Having the speakers set at the same position, I began moving the measurement microphone in a horizontal plane, preserving height and distance from the speaker. I took measurements at 15°, 30°, and 45° angles. Here is the response of JBL speaker, 1/3 octave averaged:

It's actually pretty much consistent up to 10 kHz, and even after that the difference between on-axis and 45° is slightly above 1 dB. Again, the deviations in the range from 60 Hz to 1 kHz are largely due to room modes, as the microphone was moving around in the sound field. The "bright spot" doesn't fade when listening from sides.

Now, here is the response of KRK speaker, 1/3 octave averaged:

Here, the lines start to diverge earlier—at 5 kHz, and the delta between on-axis and 45° reaches 4 dB at high frequencies. Thus, KRK speaker is definitely more directional than JBL's.

Based on these measurements, I chose to put JBL speakers as fronts. Their lacking bass response is compensated by a subwoofer, and due to their brightness they are awesome for enjoying music. While KRK speakers, thanks to their enhanced bass response and flatness on-axis are perfect for the rear position, I don't even need to route surround channels to the subwoofer.