Making friends with Windows and ARTA

The Macbook Air I was previously using for my personal projects is now retired. I have brought it to the office for playing music from local files and streaming services through equalization and crossfeed plugins. That's an interesting topic on its own, and I will do a post about it some time later.

I decided that my new laptop needs to run Windows, because it seems to be the operating system of choice for audio engineers. Indeed, on Mac I had to use FuzzMeasure and REW which are designed primarily for acoustical measurements. Whereas for PCs there are plenty of software packages for electrical audio measurements that work with regular sound cards. Potentially, one can run them on Mac via emulation, but my attempts of trying that usually resulted in crashes and hangs.

While looking for Windows laptop I faced the harsh truth—Macbooks are such a good laptops that finding a matching Windows machine is a challenge. The usual weak point is quality of screens and touchpads. After considering several cheaper laptop models I decided to bite the bullet and buy Lenovo X1 Carbon, 5th generation. I have a 4th generation Carbon as company-provided Linux laptop, and I almost enjoy it for its small weight and durability. "Almost" due to the touchpad—it's not very good. In fact, I prefer to use the "red dot" joystick controller instead.

In comparison with the 4th generation, its successor adds a high resolution screen, USB-C ports, and newer Intel chipsets. The touchpad is also a bit better. And the laptops are now available in silver body color in addition to the classic black. 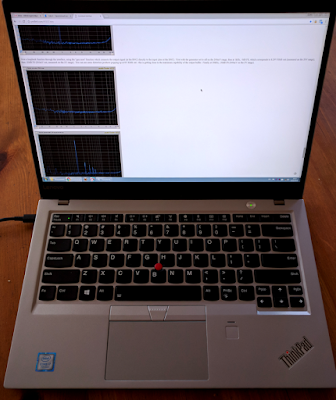 Here it is. It is even lighter than Macbook Air, and the screen is better—the bezels are very thin, and the resolution is impressive 2550 x 1440 on a 14" diagonal (the 27" monitors I have at my office use the same resolution). The IPS matrix provides very wide viewing angles. 5th gen Carbon even beats Apple laptops in connectivity as it has both USB-A and USB-C type ports, and HDMI.

From the hardware design point of view the only annoying thing is the absence of a notch on the lower part of the body, which makes it hard to open the laptop's lid using one hand only—the habit I earned over the years of using MB Air. In fact, opening the lid even using two hands is not that comfortable because the the material that the body is made of is a bit slippery.

But the most annoying feature in the new laptop is the operating system. Carbon comes with Windows 7 Pro preinstalled and I decided not to upgrade it to Windows 10 yet because I was hoping that I could use my old E-MU cards: Tracker Pre and 0404 (they are not fully USB Audio compatible, and Creative Labs eventually has stopped releasing new drivers for them.) Windows 7 feels complicated and cumbersome even compared to modern Linux graphical desktops, let alone Macs.

Speaking of E-MU drivers, Creative Labs has abandoned them in beta status for Windows 7 64-bit, and it really shows itself. I can configure the cards, but when trying to use audio analyzer apps the system hangs.

I tried ARTA, AudioTester, and the package from Virtins. AudioTester looks a bit outdated, and it wasn't stable enough. The MultiInstrument package from Virtins seems to be designed more like an oscilloscope replacement. ARTA appeared as the best choice—it was easy enough to figure out how to make the measurements I needed even without the manual, and when I looked into the manual I was pleasantly astonished that descriptions of all measurements are accompanied with the underlying DSP theory.

The only thing I haven't yet figured out completely (and it seems more like a problem with Windows 7 rather than with ARTA) is how to use my MOTU Microbook IIc with 96 kHz sampling rate. So by far, I was making all my measurements in 48 kHz mode.

MOTU Line Out to Line In Loopback

I started with a simple loopback from MOTU's unbalanced Line Out to its balanced Line In. I used unbalanced out because this is the out I can use throughout the entire experiment (not all amplifiers have a balanced line in.) I shorted the balanced cold input (ring on TRS) to the ground—this was resulting in less noise than leaving it floating. The laptop was running on battery. This is how THD, IMD, and Frequency response (FR) graphs of the loopback connection look like:

This is what I was expecting. The FR has slight bass rolloff and a small bump from the antialiasing filter—the same thing I observed on Mac with FuzzMeasure. The levels of noise and distortions are very low which confirms that this MOTU card is a good choice for hobbyist measurements. The 2nd and 3rd harmonics can be seen on the THD graph, but their level is very low.

Now these are measurements of a loopback through P. Millet's Soundcard Interface (SCI). I have connected MOTU's unbalanced line out to SCI's input, ground referenced. SCI's input range was set to 2 V. I powered SCI from the second USB-A port of my laptop. Potentially, this could introduce a ground loop noise, but it didn't—the ground loop noise usually looks like a spike at 60 Hz as we will see later.

Here the overall noise floor has raised by about 10 dB, but it's interesting that the 2nd and 3rd harmonics have disappeared. Since the input level is the same, perhaps they were resulting from a slight overloading of MOTU's Line Out. The frequency response didn't change compared to MOTU loopback.

From these measurements I can conclude that Mr. Millet has created a highly transparent device. Hopefully, my extensive efforts on making a properly shielded and grounded case also have helped.

The next thing I have tried was using different power sources for the SCI: a USB power bank, the USB-C ports of laptop, and a multi-voltage switching power supply. The power bank is as clean as USB-A, and for the last two sources the results are below:

As we can see, the USB-C port indeed creates a ground loop (note the spike at 60 Hz and its harmonics), and the wall power supply is the worst. 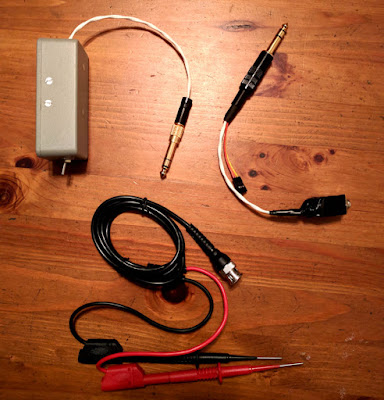 I have set the dummy load to 33 Ohms, and turned up Phonitor's volume until the reading on the SCI was showing 1 V. The signal level in ARTA for the 1 kHz sine was showing the same RMS value as in my previous experiment. So now we can directly compare to SCI's loopback.

The level of noise remains the same—I think, Phonitor's noise level is lower than SCI's. There are more harmonics seen, this is expected for a power amplifier, so the overall THD numbers have raised. The frequency response didn't change compared to original MOTU Loopback measurement which means Phonitor has a flat response.

Now if we want to distinguish between a good and a bad headphone amplifier, let's measure the headphone output on the MOTU Microbook. Here we see much more distortions. Also, even on the maximum volume, MOTU's headphone output could only deliver 0.65 V into the same 33 Ohms load, whereas Phonitor while delivering 1 V wasn't even in the middle of its volume knob range.

So here we can see a rolloff of high frequencies and more distortions. Also, for some reason there is some noise at 60 Hz, with harmonics, although SCI was powered from a power bank, so there was no loop connection through laptop's USB ports, and the laptop was on battery power.

I don't regret I've switched to a Windows laptop from a Macbook because indeed there are far more audio engineering applications. I have only done very simple tests so far, and I'm excited about the possibilities this setup had opened.

Lots of things happened while assembling my Millet's Soundcard Interface. First, I discovered that the voltage mode switch can be restricted to the required 4 positions by inserting small metal bits that came with it into the holes around the shaft. This is where they need to go: 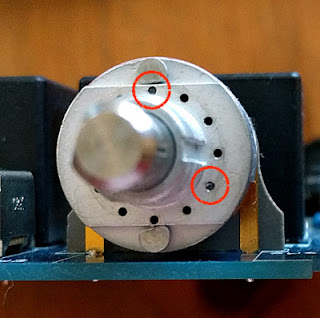 If you misplace the bit, use a magnet to pull it out. After inserting the bits, cover the front side of the switch with the metallic sticker that came with it.

While finding the right places for the bits I was turning the unit on and off frequently and managed to break the power switch. I had to solder the switch out—tough task, as it has 8 pins in total, and then solder back a replacement. Fortunately, the board continued to work as before.

By this time, Mumetal sheets have arrived and I started covering the inside of the box with them. As a reminder, Mumetal is an alloy that offers shielding from magnetic fields. There was one problem—there are round mounting studs on the inside of the box so I had to make holes in Mumetal. Doing that with a drill has turned out to be impossible—the metal is very thin, and the drill was just tearing it.

I've found that the diameter of the mounting studs is the same as in a standard paper puncher. However, the holes had to be done very far from the edges. So I had to cut the Mumetal sheet into smaller pieces: 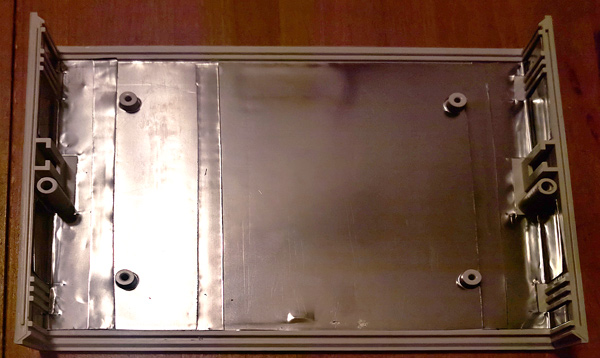 This, of course had made the coverage to be non-continuous. In order to restore it, I glued strips of Mumetal over the stitches, and then made solder connections between the strips and the sheets under them (I used an old style lead solder for that.)

This way, I've got a solid shield with close to zero resistance which made an excellent chassis ground. One thing that was left to do is to connect the board's signal ground to it. As a connection point, I've chosen one of the outbound ground legs of the Murata DC/DC converter—so the connection is as close to the power input as possible. It is also convenient that the converter is on the edge of the board, so I could use a very short wire between the it and the side wall of the box: 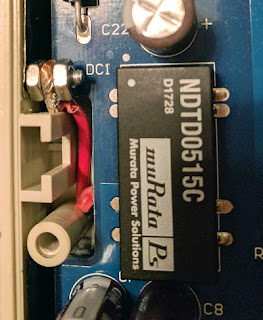 I've checked that there is indeed a low resistance path between the balanced input ground pins and the Mumetal walls. Note that all this shielding didn't help to bring down the "zero level" of the device as I was hoping.