Since I've started working on the SPL Phonitor Mini crossfeed filter replication, I've learned so many things that I will need several posts in order to describe them all. Let's start with the analog part.

As I've mentioned in the previous post, I have a goal of replicating Phonitor Mini crossfeed settings using DSP in HA-DSP. The first task I was faced with was performing accurate measurements of Phonitor's filters. They are quite delicate—the amplitude of the filters doesn't exceed 3 dB, and the attenuation of direct vs. opposite channels need to be replicated. Not surprising, this task required a lot of attention to the details. Especially when using budget hardware (I use MOTU MicroBook IIc as my capturing tool) which has limits on the precision it can provide.

In addition to being delicate, crossfeed filters involve signal summing due to partially mixing signals from the left and right input channels. This can be a problem when using inexpensive sound card for measurement, thanks to slight channel imbalance. As an example, below are the measurements of all the combinations of "Main" output and "Line" input channels on MicroBook: 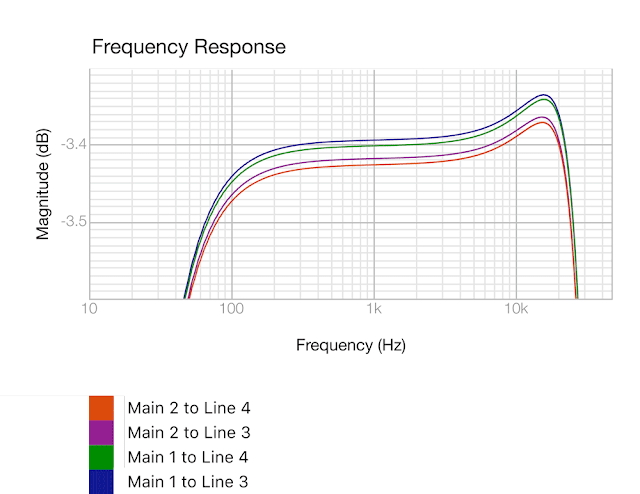 It's easy to see that no pair matches exactly in the recorded signal level. What that means to our crossfeed measurements, is that even if we ignore own channel imbalance of Phonitor Mini (which is also present in reality), the records of the sum of left and right channels (from crossfeed) captured by left and right inputs of MOTU will have different levels.

Unfortunately, the input and output attenuation controls on MicroBook, despite being digital, do not provide required resolution in order to compensate these offsets. This also means that one needs to be careful with performing calibration of the soundcard—there need to be separate calibration profiles per input / output channel combination.

I wasn't particularly happy with the discovered lack of balance, so I decided to try other inputs and outputs, as MicroBook has several of them. This time I used unbalanced line output, and "Guitar" input. Since it's a mono input I used a Y-cable 3.5 mm TRS into two 1/4" TS, connecting each one of them in turn. This time the channels balance was much better, just 0.003 dB offset: 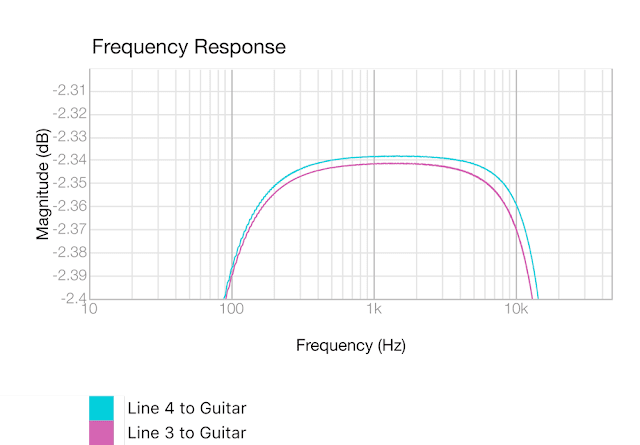 It may appear as if the second graph has a much steeper rolloff on ends, but this is only because this time I've magnified more along the vertical scale. When placed next to each other, the graphs do not show such a dramatic difference: 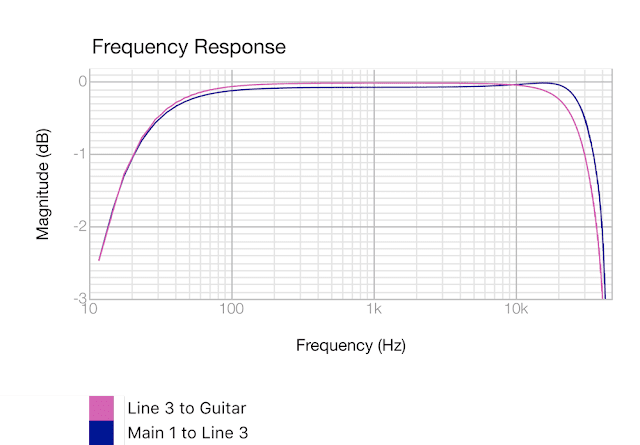 Using the "Line to Guitar" configuration, I connected MOTU's unbalanced line out to Phonitor's unbalanced input, and one channel of Phonitor's headphone output again via a Y-cable to the guitar input. This is how "flat" Phonitor (no crossfeed applied) measures in this setup: 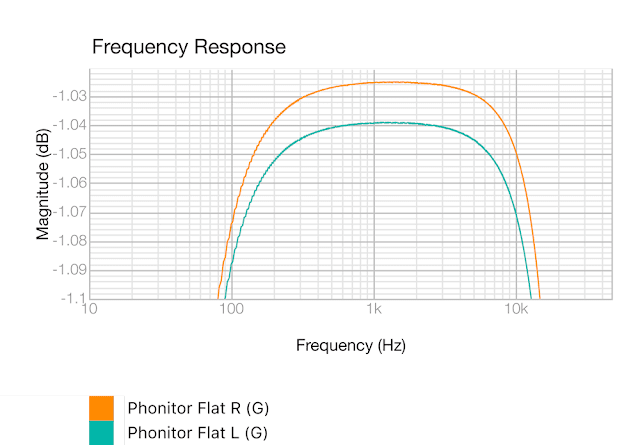 Note that the channel offset is now about 0.015 dB instead of 0.003 dB of the loopback connection, due to slight imbalance introduced by Phonitor.

On headphone amplifiers the channel balance usually skews as volume level changes (unless it's a super expensive super precise amplifier, apparently the Mini isn't one). It's anyway unknown how the crossfeed circuit affects channel balance, so I decided not to try to find a volume knob position providing a smaller offset, having that this volume position gives me the highest signal level without the need to engage the amplifier on the guitar input, which would contribute to non-linearity and noise.

It's worth mentioning that Phonitor didn't change the shape of the curve. Plotted on the same graph, its response covers the loopback response exactly. That's great—this is what you expect from a "transparent" audio equipment.

Another problem I faced was noise. Since for measurements I have to connect several pieces of electrical equipment together, this creates a possibility for ground loops to appear. There is a great article by Bill Whitlock on the origins of ground loops, available for free download here (need to apply for a free registration first).

For example, when measuring Phonitor (which is a stationary amplifier), I had to disconnect the laptop running measurement software from AC power, since otherwise a ground loop was created via two connections to mains power.

More challenging was avoiding ground loops when measuring HA-DSP. It runs on battery power, but unlike Phonitor contains its own DAC, which means I had to connect it to USB port of the same laptop. This creates a ground loop via two USB connections (from MOTU and HA-DSP). In fact, the noise level introduced by this loop was about 30 dB(Z), I had to get rid of it. I've considered several ways to do that:

I decided to go with the option 4, and bought a Full Speed isolator from USConverters. After all, 48 kHz impulse response can be upsampled to 96 kHz (this is the operating rate of HA-DSP) easily.

Below is the plot of measured channel imbalance of HA-DSP output from USB, at 48 kHz, with DSP bypassed: 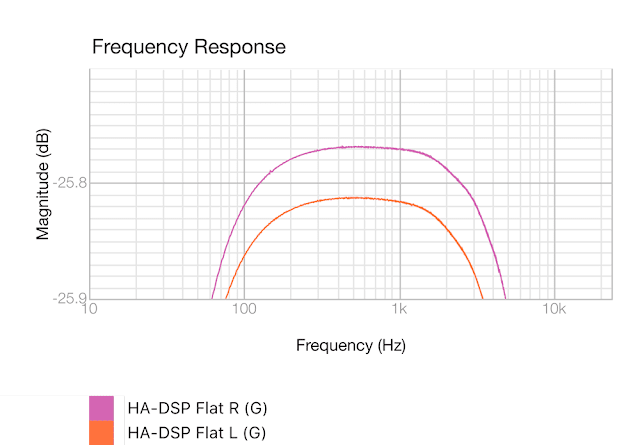 As it can be seen, the channel offset is about 0.04 dB—that's considerably more than of Phonitor. Another issue is more noise—it can be seen on an unsmoothed plot. And that's even after making 5 consecutive measurements and averaging them.

Yet another issue is different roll-off at high frequencies: 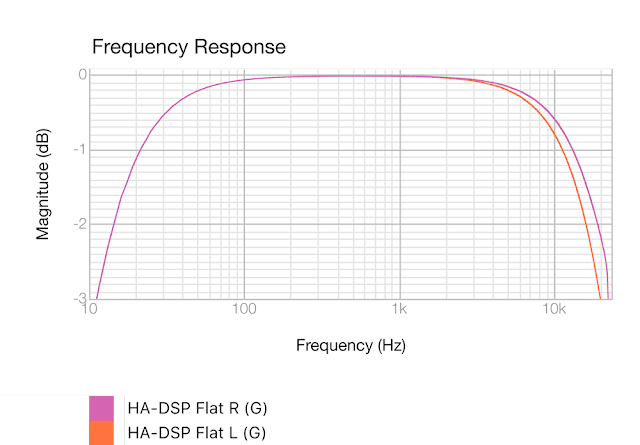 As it can be seen, the difference at 20 kHz is about 0.9 dB! Recall that the same input was used on MOTU, so the difference is definitely due to HA-DSP. Fortunately, this can be compensated as part of filter design process.

UPDATE 9/14/2017: Turns out, the early roll-off for HA-DSP is an artefact of averaging of measurements. In fact it's not that bad, I'll publish updated measurement graphs in the next post.

I think that's enough for now, and it's just the beginning of my findings! Will publish more soon.