The amplifier under test is connected to a load. The load can be either real speaker or a dummy load—a resistor, for example. The soundcard interface is connected in parallel to the load. Since the interface's input impedance is about 100 kOhm, it draws only little current by itself (for a comparison, typical oscilloscope input has 1 MOhm impedance.) The output from the soundcard interface goes into a soundcard, which is connected to a PC (or Mac) running measurement software. 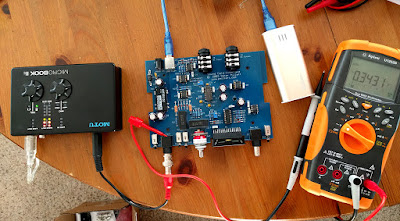 After I finish with shielding the enclosure and assembling the device I will start measuring the parameters of the device itself, and will try it on some headphone amplifiers.