As I was unhappy with the imprecision of "Mid" tone control on Subjective3, I decided to get rid of it—I don't see a point in having it anyway. So I opened my unit, and desoldered VR2 pot away. After that I've re-measured the frequency response and channel balance, and it got more even: 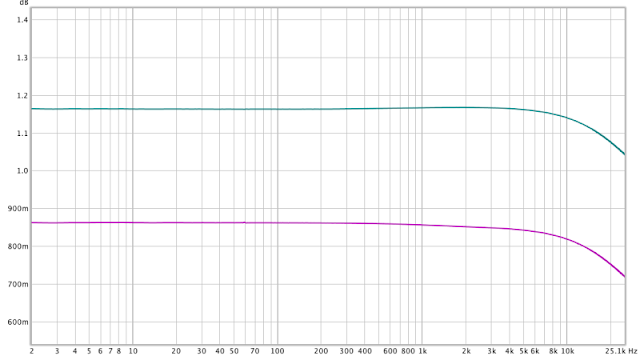 The inter-channel difference is ~0.3 dB, which isn't superb, and I'm thinking how could this be fixed.

I've also measured the pot I desoldered, and indeed it's not very well balanced. At the middle (notched) position it shows:

So if you are soldering Subjective3 yourself, think twice if it's really needed to put the "Mid" tone control in. At least, measure it first to check how well its channels are balanced.

Another thing that was puzzling me since I saw the partial schematics of Subjective3 here is whether it preserves absolute phase. Clearly, the schematics shows that the filter network is attached to the inverting input of the opamp. And I've actually checked whether the polarity is preserved by listening to in-phase stereo pink noise, where left channel was going through Subjective3, and right channel was connected directly, and there is no inversion. 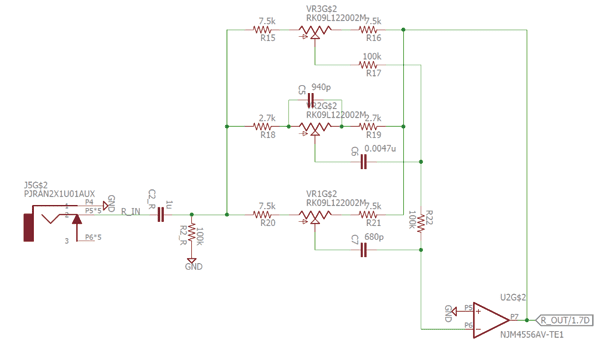 Then I've found an explanation of this fact by examining the board and finding another stereo opamp there, near the output connectors. So apparently, it is used to restore the polarity. 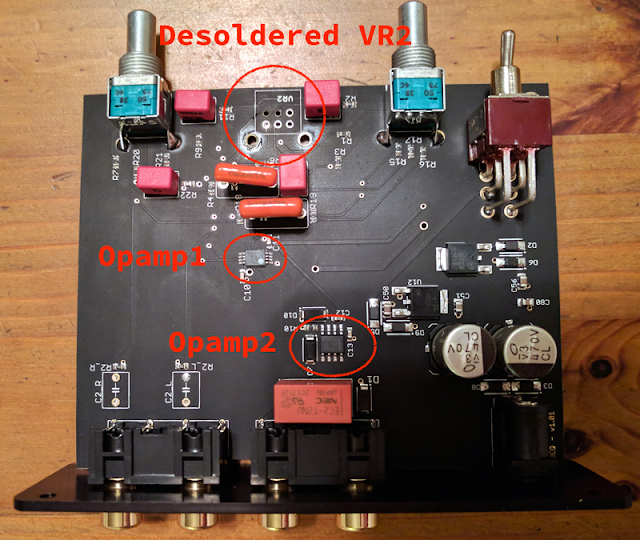 And yet another thing I've figured out by disassembling my unit is that ready-made units soldered by JDS Labs employ DC source coupling. As it can be seen, C2_L and C2_R capacitors are left out, and their mounting holes are short-circuited. This may be a bit risky if the signal source is not of a good quality. 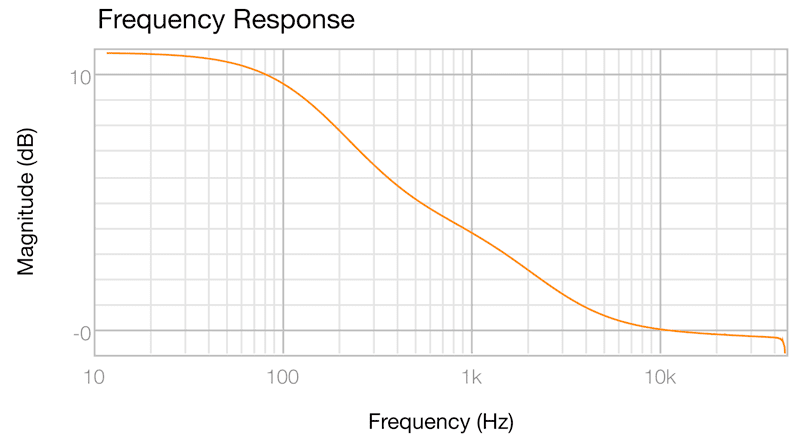 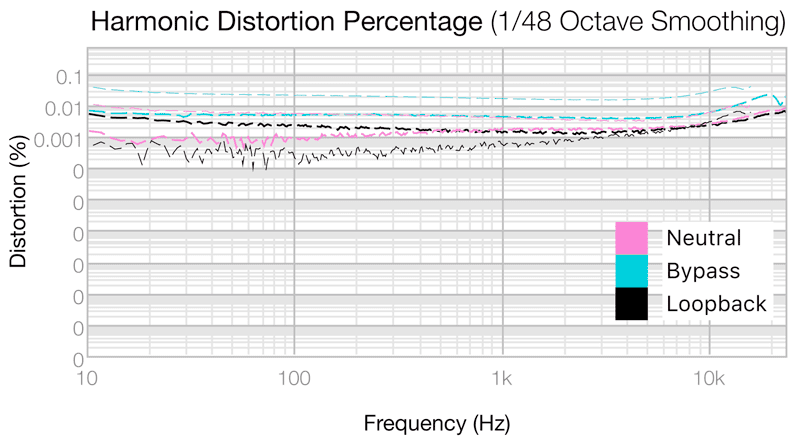 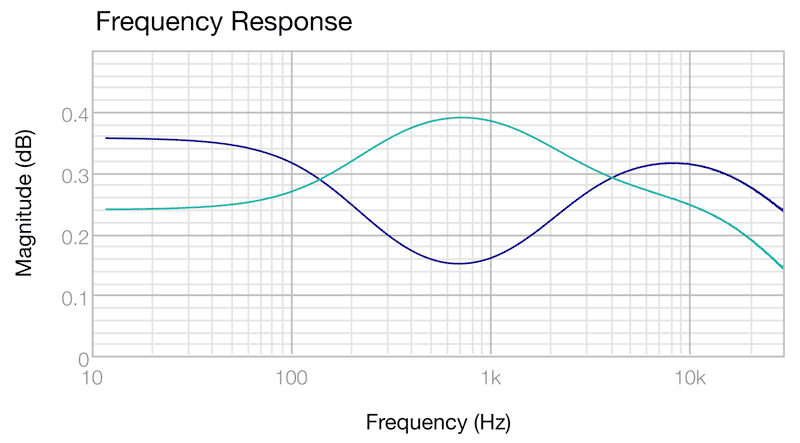 While looking around for other crossfeed implementations, I've found Redline Monitor by the audio company called "112dB". It's a plugin which is intended to be used with DAWs for simulating loudspeaker sound on headphones. On Mac, with Audio Hijack Pro it's quite easy to hook it up to the system audio output. The plugin has several emulation options, some of them missing on Phonitor headphone amplifiers, but it's price ($69) calls for a thorough evaluation before buying it. Thanks to generosity of 112dB, the plugin is available for a 60 days trial period, which I'm using the get some insight into how it works. 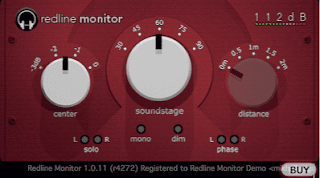 I would start with the rightmost control—the simulated distance to loudspeakers. I think, it's the most interesting control because the type of processing and the resulting sound changes dramatically depending on its current value. When the value is "0 m", the plugin effect is the most non-intrusive and resembles Phonitor's processing. All other settings of this switch introduce rather serious phase shifts and comb filtering to simulate room reflections.

The "Soundstage" control defines the total angle between the simulated speakers. "Center" is center signal attenuation. The "Dim" switch pre-attenuates the input signal to make sure that the processes signal doesn't clip. The rest of the switches are mostly needed for professional monitoring purposes, they are covered in the manual.

While doing my comparisons between Phonitor line of headphone amplifiers and Redline Monitor, I went through manuals for Phonitor 2 (this manual I have never opened before) and Phonitor mini. This was the first time when I discovered the tables and graphs in Phonitor 2 manual (page 17), and also noticed the statement "With the Angle switch you define the frequency-corrected channel crosstalk. In this case, we are dealing with „Interaural Time Difference“ (ITD)" in Phonitor mini's manual.

This was a very surprising discovery for me, because previously I was sure that Phonitor has almost linear phase response, and doesn't introduce any group delay. The delay was never showing up in my measurements, for reasons yet unknown. But from the manuals, it was obvious that Phonitor also employs ITD.

But that was all for good. And in fact, making such discoveries that I would otherwise have missed is one of the reasons I write this blog.

Which are semantically equivalent to the following settings on Phonitor:

Crossfeed level: Low Angle: 30 degrees (this is between the speaker and the center, thus soundstage is 60 degrees) Center: -1.2 dB

The amplitudes, the knee frequency, the inter-channel level—just everything is different, only the general principle stays the same.

However, if we look at group delay graphs, they look very much the same (again, at equivalent settings):

One small difference is that Redline Monitor has 300 μs ITD as low frequencies, while Phonitor 2 has 200 μs ITD.

In order to perform an ABX test, I've processed several music excerpts using Redline Monitor, and also recorded them via Phonitor mini crossfeed matrix (after I have discovered that my Phonitor simulation lacks group delay, I decided I shouldn't use it for tests). The same processing settings were used that are specified in the section above. The goal was to check can Redline Monitor and Phonitor mini be distinguished, and which one would I prefer.

The results are not very conclusive. Perhaps, the choice of tracks wasn't revealing enough, or I do need to train my listening skills better. With the modest processing amount I was applying, I couldn't even reliably distinguish the source from processed tracks, and distinguish Redline Monitor from Phonitor. The good news is that there isn't much change to the tonal balance with either crossfeed implementation.

Let's go back to Redline Monitor's settings and check what happens to its transfer function when we start increasing the simulated distance to the speakers. Here the center image is at 0 dB attenuation, the soundstage is 60 degrees. I started with 0 m distance, proceeding in 0.5 m increments up to 2 m setting. Below is the graph of resulting frequency response, where darker colors represent larger distances. The blue plot is for the left channel, the red plot is for the right channel:

I guess, the ripples simulate the interaction of reflected sound with direct sound that happens when listening to loudspeakers in a room. The farther the listener is, the more enveloped they are in the reverberant field. As we can see, the amplitude of ripples is increasing with the distance, making the sound more and more colored.

It would be interesting to judge correctness of this simulation from the psychoacoustic point. In real conditions, the ears and the brain can "listen through" the room, discarding these colorations, but the brain has much more information, e.g. changes in received sound with subtle head moves, which are absent in this simulation. So the question is open whether these ripples just color the sound, or are they "converted" into speaker distance information by brain, or both processes happen to some degree simultaneously.

I think, Redline Monitor can be used as a substitute for Phonitor mini when the latter is unavailable. Although, their processing is a bit different, one needs a very trained ear in order to distinguish between those two implementations.

For Redline Monitor, I would recommended to use 0 m distance setting in order to avoid comb filtering occurring with the other settings of the "Distance" control.