A measurement microphone is an essential tool for doing any acoustic system adjustments. Although it can not substitute ears and brain in evaluating the quality of an audio setup, it's indispensable for a number of tasks like speaker alignment.

When aligning speakers we perform relative measurements, for example—are there any significant differences in the frequency response curves between left and right speakers? What about time alignment? For these tasks any measurement microphone working in audio range is suitable, with no calibration required. However, once we start assessing absolute parameters like the shape of the frequency response curve and try "straightening" it, we need to be sure that the microphone itself provides us with accurate data. After all, it's impossible to draw a straight line using a curved ruler!

A Bit of Theory

Before answering that, let's consider several basic definitions. If a microphone receives only direct sound of an acoustic source, this is called free field conditions. Because even "omnidirectional" measurement microphones become more and more directional with rising of the frequency, the orientation of the microphone capsule relative to the sound source becomes important in this case. Thus, the main operating condition is when the microphone is pointed towards the sound source—on-axis incidence.

An opposite of free field is when the microphone receives the sound from all directions (random incidence), this condition is called diffuse field. In practice, we mostly deal with reverberant fields—a mix of free and direct fields. Microphones are calibrated to a flat frequency response either for free field conditions or for diffuse field conditions. Due to imperfect omnidirectionality a pressure microphone can not achieve a flat response simultaneously under both conditions. Below is an illustration from G. Bore and S. Peus "Microphones" brochure:

Obviously, when measuring a sound source with a microphone, we need to understand the conditions it was calibrated for. We also need to make sure that we measure under these conditions! A lot of measurement microphones accessible to audio enthusiasts are calibrated for a flat response under anechoic (free field) conditions. That is, for the previous example the calibration file will contain the data for the black solid line, so the measurement program will compensate for its excessive sensitivity at high frequencies. However, in domestic rooms the field is reverberant—there is direct sound from the speaker mixed with reflections coming from all the surfaces surrounding it.

With the advent of computer-based measurement tools simulating anechoic conditions becomes easy. After recording a log sweep, the measurement program performs forward and inverse Fourier transforms on it, obtaining an impulse response (IR). On the IR graph, we can clearly see the initial impulse and the sound contributed by reflections: 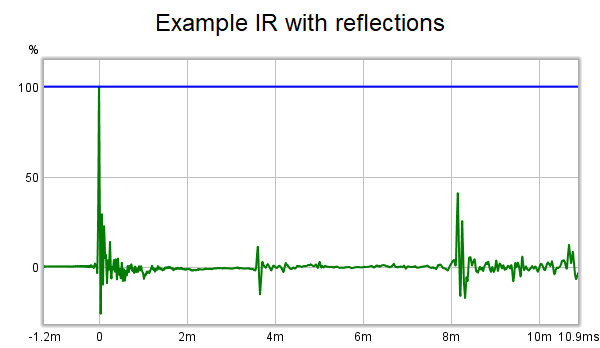 If we window the impulse response to cut the reflections, we simulate free field conditions. The drawback is that we also cut out information about the frequencies having wavelengths longer than the window. The approach than can deal with this issue better is called frequency-dependent windowing (FDW). It windows each frequency individually and thus doesn't lose low frequency information. In REW the user can specify how many cycles of each frequency to keep:

Acourate provides more advanced controls allowing to specify cycle count for low and high frequencies, and before and after the main IR peak, all independently from each other: 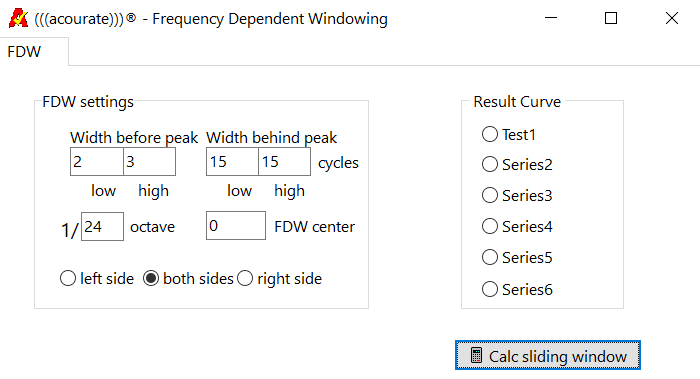 Over time, I have acquired 4 measurement microphones of different makes and types: 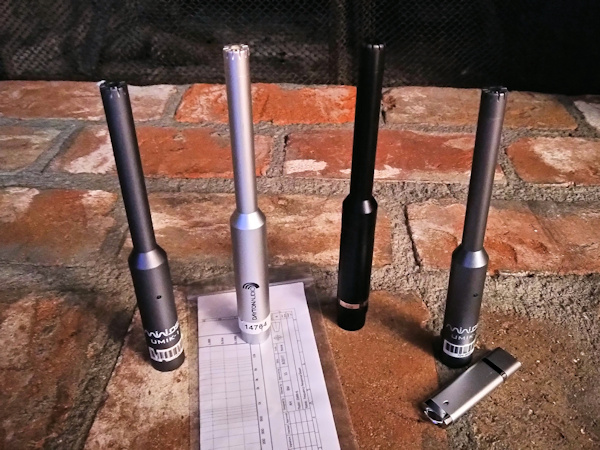 There is an interesting story regarding the Josephson microphone. I've reached out to Josephson to ask about calibration files and got the following reply:

We do not include individual calibration data at the price of the C550H, sorry. It is quite time-consuming to do that properly and we would rather not provide unsupported data. We are aware that some companies provide “calibration data” but without any supporting traceability or standard procedure it’s approximately meaningless.

What they mean here is that there exist standardized calibration procedures that are performed by certified labs, and measurements carried out after this calibration can be used in official reports. And C550H is not at the price point to justify these procedures, despite that it's the most expensive microphone of all four I have. Obviously, after reading this statement I started questioning the quality of the calibration files provided by Dayton and miniDSP, especially after I have compared the calibration files from CSL and miniDSP for the same UMIK-1 (Mic 4): 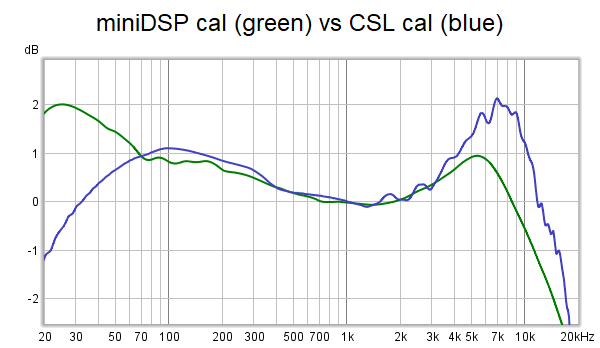 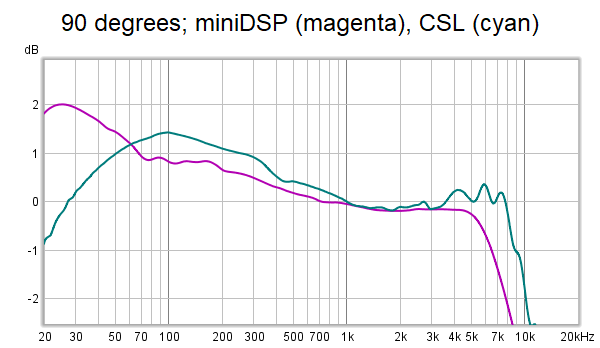 The differences for on-axis response are quite significant—the resonant peak is further up in frequency and is higher by 1 dB! That's interesting, right?

Then I decided to compare all 4 microphones by measuring the same speaker using ground plane technique. The speaker was RBH Sound E3c center channel which I corrected sligtly using Acourate to give it a tighter IR. Since I was doing this experiment in a small room, instead of actual floor I used my daybed: 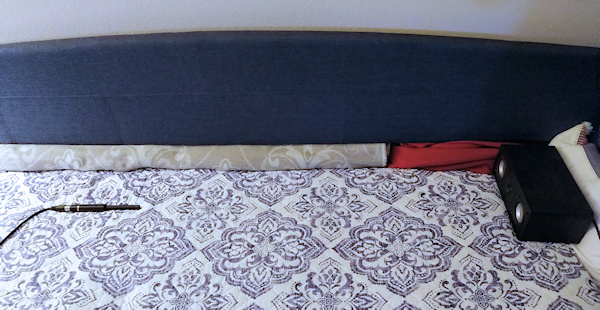 This speaker due its small size obviously lacks low frequency output, but we can compare everything above 40 Hz. This is how the measurements look when no calibration files are used. The curves are gated using FDW window of 3 cycles to create quasi-anechoic measurement: 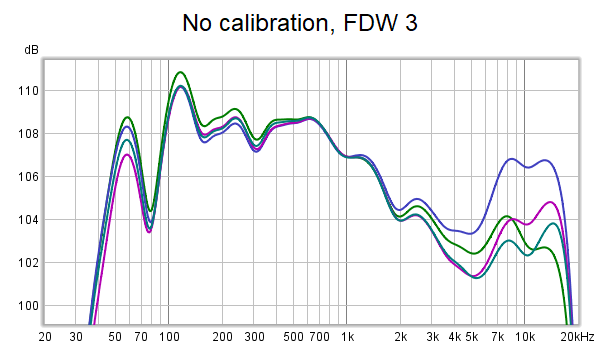 All microphones are pretty much aligned except for the Mic 1 (blue) (miniDSP UMIK-1 with manufacturer cal only). If I apply manufacturer's (miniDSP) calibration files for both UMIK-1 mics, they agree very closely: 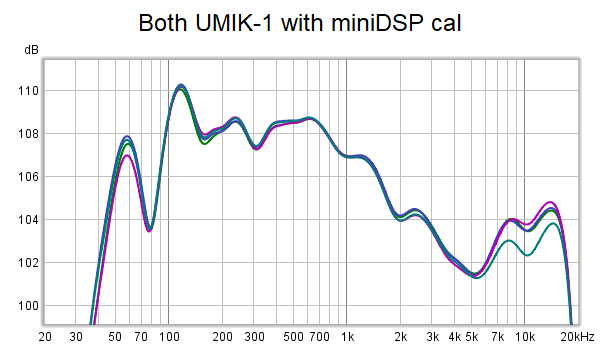 That is good news, meaning that at least miniDSP are consistent with their calibration method. Note that Mic 1 was bought about 5 years ago, and Mic 4 just recently. The only slightly deviating mic is Josephson (Mic 3, cyan). If we would want to align its measurements with UMIKs, we need to bump its response around 9.7 kHz for 1 dB with Q 1.6.

Also note that Dayton (Mic 2, magenta) still doesn't have its calibration applied. What if we apply it? 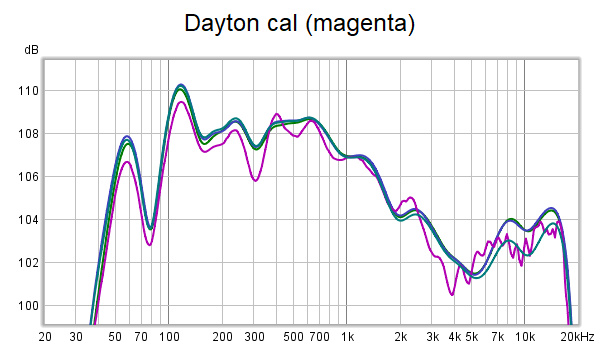 Yikes! This is much worse than without calibration. Also note the ruggedness of the calibration data—it works quite bad with smoothed graphs obtained by applying FDW. Now I can see what Mr. Josephson was meaning by "meaningless calibration".

What about CSL calibration data for UMIK-1 (Mic 4)? Here is the graph of Mic 4 with CSL calibration applied (green), Dayton with its calibration (magenta), and Josephson (cyan). I've smoothed UMIK-1 by 1/12 octave and Dayton by 1/6 octave: 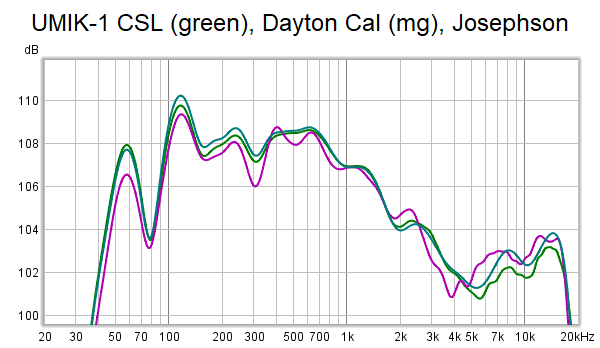 We can now see that UMIK-1 with CSL calibration is much closer to Josephson, and Dayton with its questionable "calibration" is nevertheless expressing some similarity, too. Since we know that CSL calibration data is for achieving flat response under free-field conditions, we now know what the target for Dayton and Josephson was, although Josephson this time will need to be bumped down at high frequencies by about 1 dB to match CSL calibration.

Preliminary conclusions we can make so far:

What if we actually took a sound source with a frequency response that is flat in anechoic conditions and try measuring it with these microphones? I recalled that a couple years ago I was using NTi Talkbox as a reference speaker and actually still have those measurements. At that time I only had Mic 1 (UMIK-1 with miniDSP calibration). However, having the results from the previous experiment we can derive transfer functions for transforming measurements done with that microphone into other ones. Although that will not be as precise as actually measuring, but still we will get a good approximation.

This is how NTi Talkbox frequency response looks under anechoic conditions (from its specs): 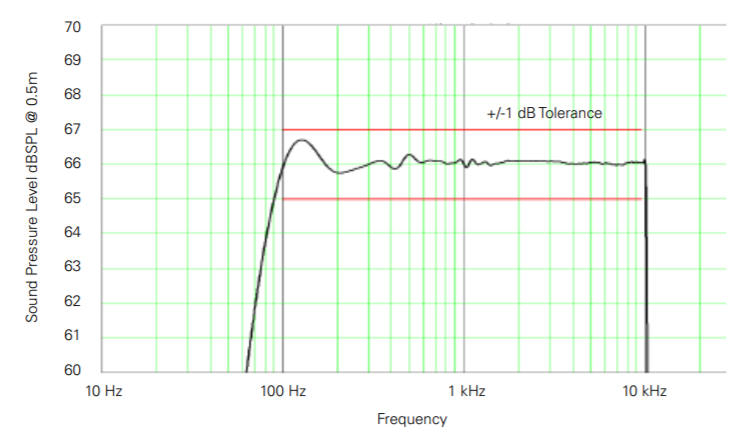 It should be reasonably flat from 100 Hz to 10 kHz on axis. And this is how it was actually seen by Mic 1 on axis from the same distance (0.5 m) with a FDW window of 3 cycles applied: 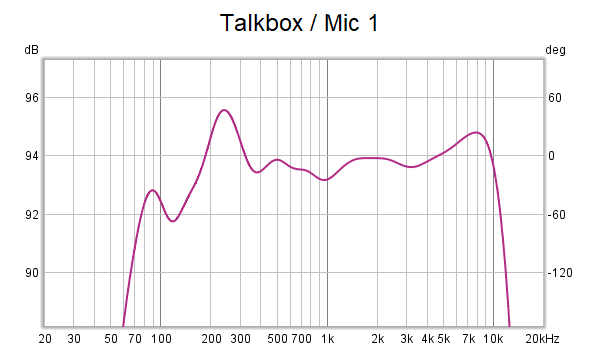 Irregularities below 300 Hz are due to room modes—they need to be ignored. But look at the bump at 7.9 kHz—that's clearly due to insufficient compensation of the microphone coincidence bump in free field conditions! This confirms that miniDSP factory on axis calibration is not for a flat response under anechoic conditions.

In order to predict how would Mic 4 have done the same measurement I used the following formula: 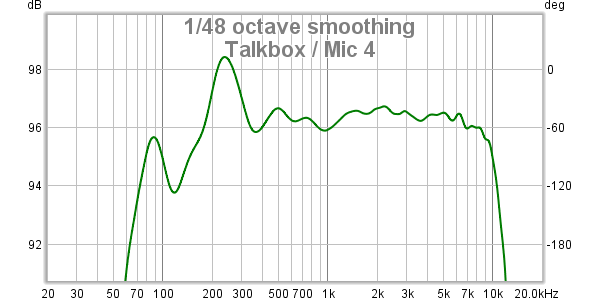 Now, this is almost flat! Though, we can see a 0.5 dB roll-off at high frequencies, it's not clear whether it comes from windowing, or due to imperfection of our simulation method. Unfortunately, I can't make a direct experiment because I don't have access to that Talkbox anymore.

Josephson also shows a good result in this simulation: 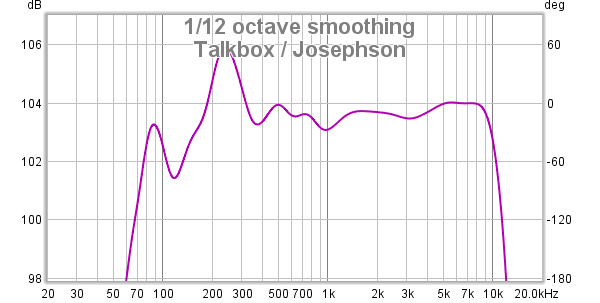 Confirmed—a speaker tuned to flat for free-field conditions indeed measures as flat under quasi-anechoic conditions with a free-field calibration applied. Also confirmed that factory calibration of UMIK-1 mics is not for a flat response in free-field.

Choose the right tool for the job. In order to tune a speaker to a flat response in free field I would choose either UMIK-1 with Cross-Spectrum Labs calibration or Josephson C550H. For measurements in a reverberant field UMIK-1 with factory calibration and Dayton with no calibration can do a good job. In fact, the tuning of Josephson hits a sweet spot allowing it to be used for both kinds of measurements.

Note that I only considered on-axis response of those microphones. For a random incidence (90 degrees) the results may be different. Also note that the results for my Dayton EMM-6 may not apply to other Daytons—I don't know how much variability do exist between their mics. On the other hand, Josephsons are known to be pretty consistent.

A question remains how these differences in the target response of measurement microphones do not prevent people from thinking that having a "calibration" for their mic is all that they need, without wondering what was it calibrated for? My answer to this is that people usually experiment with their target curves anyway and make the final decision judging by whether they like what they hear.