For a long time this topic was troubling me—how to measure bridged mode amplifiers properly. The problem here is that without taking precautions it's possible to end up with an amp ruined by a short circuit. I think I've got enough understanding about this matter and got some interesting results by measuring one of the amps I use.

A lot of commercial stereo amplifiers I've seen have "bridged mode" feature which turns the unit into a mono amplifier of higher power. E.g. on my Monoprice Unity amplifier, one needs to set the mode switch accordingly, connect the "+" wire of the speaker to the right "+" output, and the "-" wire of the speaker to the left "-" output. Obviously, only one input (left) is used in this case.

This mode is implemented in the amplifier by dedicating each of the channels to one wire of the load, and inverting the input to one of the amplifiers. Schematically, it looks like this:

This configuration doubles voltage on the ends of the load compared to regular stereo mode. In theory, this would result in 4x power increase into the same load, but in reality due to various losses it's usually only a bit higher than 3x. For example, the Monoprice Unity 100W amp is specified as delivering 50 Watt/channel into an 8 Ohm load in stereo mode, and 120 W into the same load when bridged, that's 2.4x ratio. Exemplary engineered AHB2 amplifier from Benchmark offers a much higher increase of 3.8x into the same load when in bridged mode.

However, the bridged configuration potentially can add more distortion because each channel effectively "sees" twice less load (e.g. 4 Ohm if an 8 Ohm speaker is connected). Thus, it would be interesting to measure the difference in distortion of bridged vs. regular mode. But here is the catch—the "-" wire of the load is now connected to the second amplifier's output. We can't connect it to the signal ground of an audio analyzer anymore as this would short-circuit the amplifier. 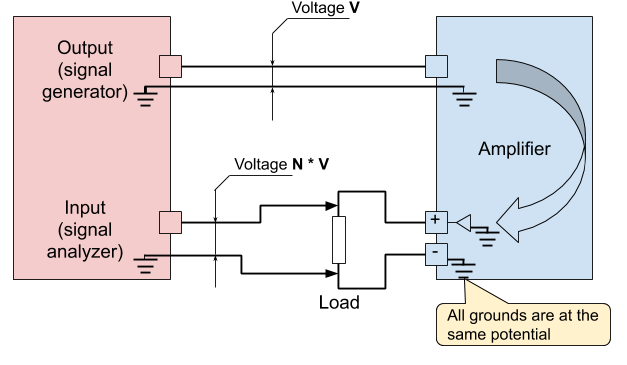 However, in the bridged configuration the zero voltage point (reference potential) for amp's output is virtual and located "in between" the terminals of the load: 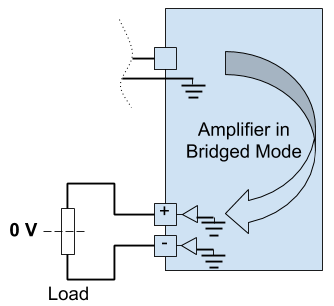 The same situation can be encountered with Class-D amplifiers that are designed for maximum efficiency. In this case so called H-bridge configuration is used. That means, these amplifiers do not offer "single ended" mode at all and always run in bridged mode. Not every Class-D amp use H-bridge, but measurements for this class of amplifiers must be done with caution.

And we encounter the same problem when we want to measure a headphone amplifier with "balanced" or "active ground" output. Note that the implementation of "balanced" output may vary—in the simplest case it only means that left and right outputs do not share the ground point. This is done to reduce channel crosstalk that occurs due to common-impedance coupling. In this case there is no additional amplifier on the "-" wire, and thus connecting it to the ground of the analyzer input does not cause any issues.

However, if "balanced" headphone output means "doubled circuitry" (essentially, this is the same as "bridging" for a power amplifier), or if the ground channel has a dedicated amplifier path, as in the AMB M3 amplifier (this is called "active ground"), then we must avoid connecting the ground of the output to the ground of the analyzer input.

Since we must avoid connecting the ground of the output to the ground of the input, the simplest solution would be to leave the second wire of the output "floating" and only connect the "+" wire to the signal input of the analyzer. That's what I used myself in the past. In this case, the analyzer will still uses the input ground as a reference. The result might be off due to difference in levels between the "virtual ground" point in the middle of the load and the input ground. 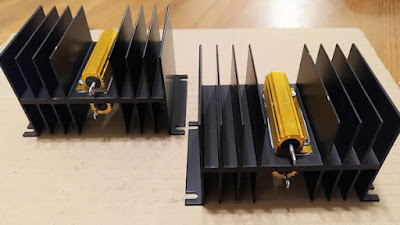 For example, I created a symmetric load consisting of two 4 Ohm resistors. In this case, theoretically there is a 0 V point right between them. In practice, the measured difference between the potentials of the output and input grounds was 0.35 V. That means, it's better to avoid connecting them because this voltage will induce current into the input ground.

Also, what if we can't split the load, e.g. if we are using a real speaker instead of a resistor load? In this case we need to make a differential measurement. For oscilloscopes, there are special probes for this purpose. QuantAsylum QA401 has differential inputs (marked "+" and "-"). We need to connect one side of the load to the "+" input wire, and the other to the "-", leaving input ground floating. That's OK because the ground is not used as a signal reference anymore. Here is how wiring looks like: 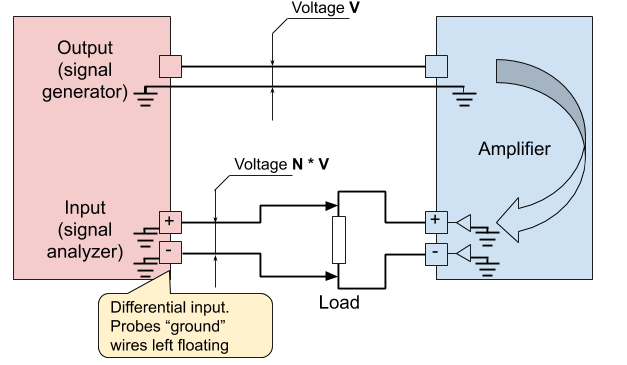 Another advantage of a differential input is that any common mode noise on the probes gets cancelled. What I have noticed is that on a single-ended measurement I see a 60 Hz spike often, but it disappeared immediately after I have switched to differential input—with same amp, same probes, and same connections. That means, the 60 Hz hum is induced into the probes' wires by electromagnetic fields from nearby mains wiring.

As a practical exercise, I've measured THD and IMD on Monoprice Unity 100W Class-D amplifier. It does not use H-bridge configuration, that means in stereo mode channels are driven from a single end and the "-" wire of the speaker it at the input ground plane's potential.

First I set the amp to maximum volume and checked with a true RMS voltmeter the potential difference across an 8 Ohm load while driving the input with a 1 kHz sine wave at -10 dBV (that's the nominal consumer line level). The voltmeter was showing 19.55 Vrms. Note that the resulting power value (from the V ^ 2 / R formula) is ~ 48 W, which is twice less than 120 W specified by the amp's manual (perhaps, the manufacturer was using higher level of the input signal). However, these levels seem right to me, in fact usually I don't even run the amp at the maximum volume.

But even that output level is close to QA401's limits on the input voltage (20 Vrms) so I decided to use a split load (2 x 4 Ohm resistors in series) and lowered input signal to -12 dBV. This got me 14.47 Vrms across 8 Ohm load, which is mere 26 W. Over the same load, a differential measurement with QA401 shows 23 dBV peak (agrees with the figure in Vrms), and if the load is specified as 8 Ohm, QA401 also shows 25 W output power—nice.

Here is what I saw in terms of THD and IMD: 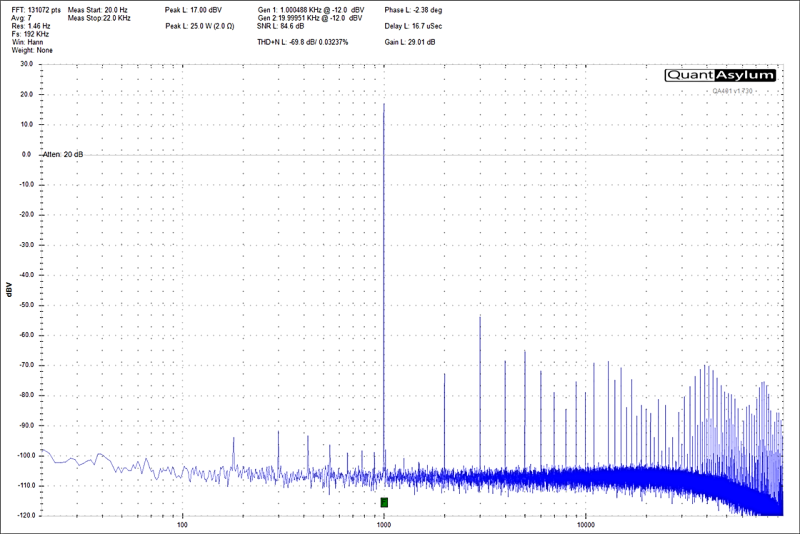 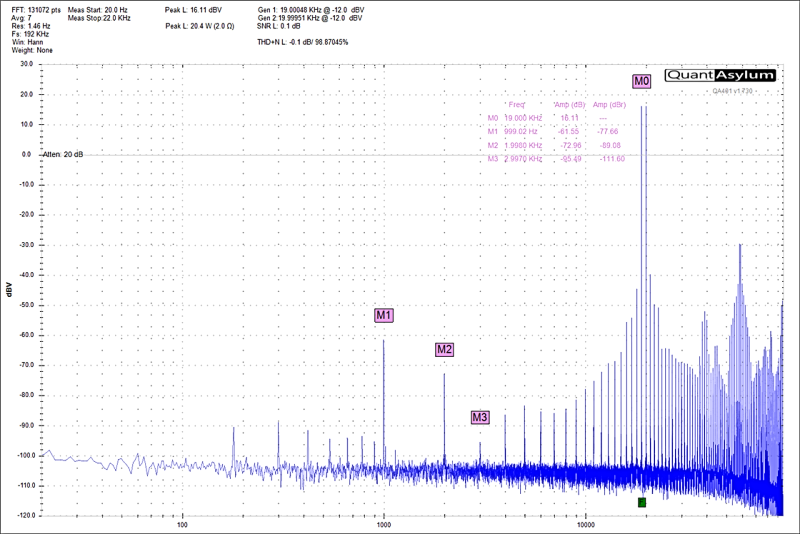 Definitely not outstanding results, especially if we consider that this is at less than 1/4 of the advertised power. One particularly interesting issue is the amount of ultrasonic noise on the IMD measurement. I suppose, this is caused by the fact that this amp uses a weak anti-aliasing filter, as we can see from its frequency response measurement: 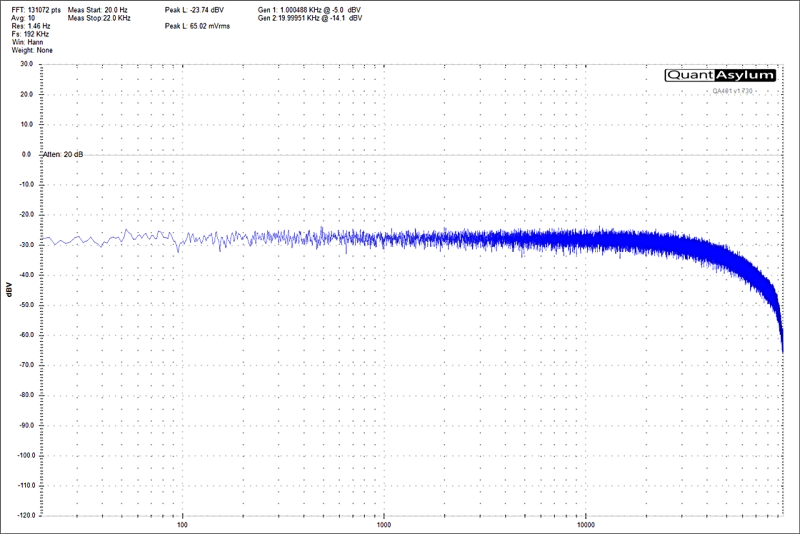 The graph is quite fuzzy due to amplifier's non-linearity, but still we can see clearly that the downwards slope on the right is very gentle. This could be good property for a Class-A or Class-AB amplifier, but since Class-D effectively applies sampling to the input signal, the output is better be treated by a brick wall filter.

I tried to achieve the same modest 25 W for an 8 Ohm load (remember that the manual states that the amp outputs 50 W into 8 Ohm in the single-ended configuration), however with the volume at maximum the reading of the voltmeter reading was only 10.45 Vrms, that's less than 14 W output power. I've increased the input signal level to the nominal -10 dBV, and it got me about 22 W. And even with this lesser power, the THD have increased twice compared to bridged mode, and the dual tone signal for the IMD was overloading the amplifier, so I had to cut it the input for IMD back to -12 dBV (and it still seem to overload). 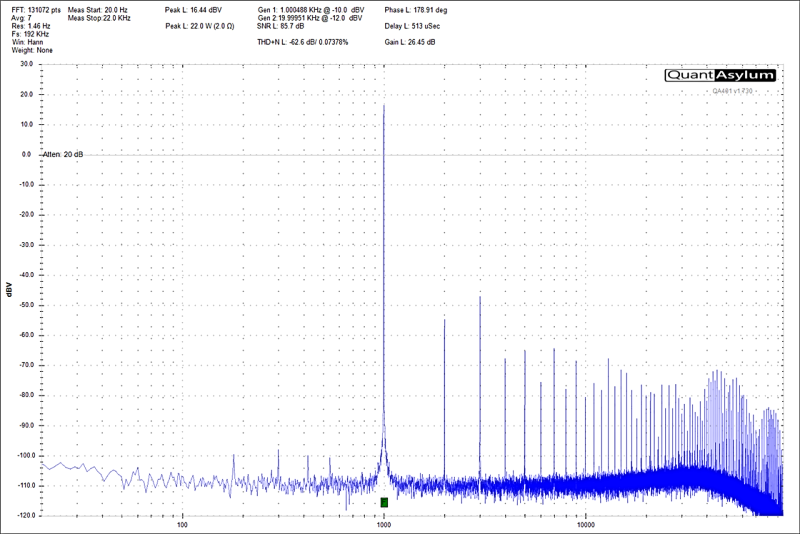 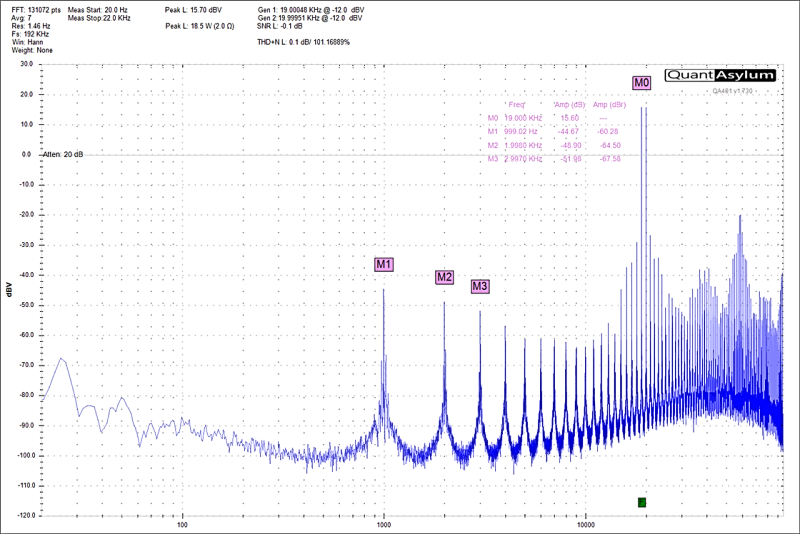