For some experiments that require hardware decoding of Dolby Digital I've acquired a cheap Chinese 5.1 decoder on Amazon—it costs just $24 so there was not much hesitation while buying it. 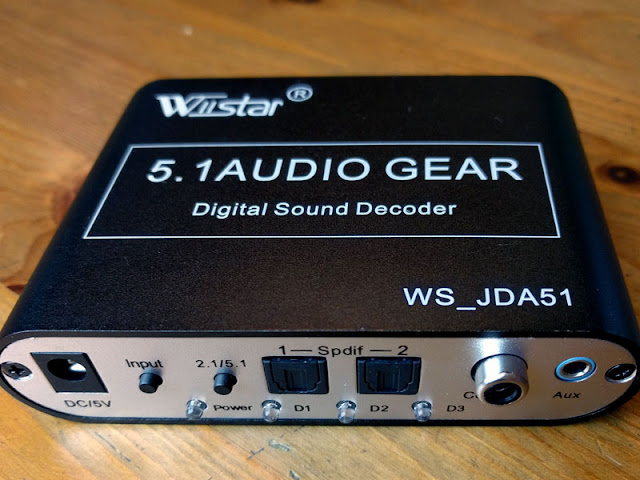 The good news is that it's indeed a proper Dolby Digital (AC3) decoder, which also supports upmixing of stereo channels into 5.1 (probably using Dolby Prologic). The bad news is that the quality of the audio output is... consistent with the price of the device.

I've found a post by Alexander Thomas describing previous versions of this device. Compared to what Alexander had observed, the hardware I've bought seems to be somewhat newer: 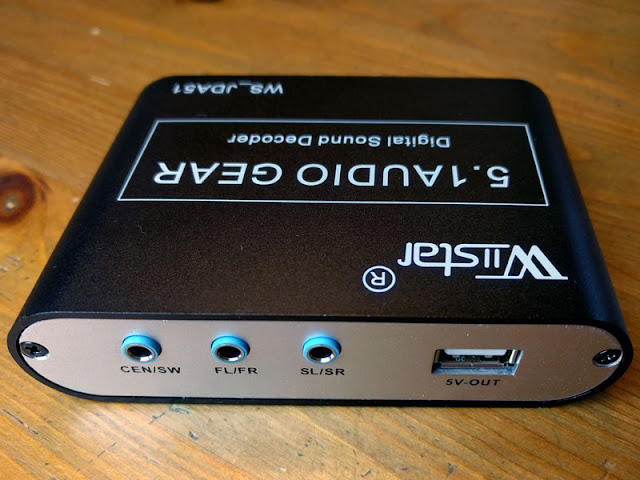 There are still some similarities though:

Now let's take our screwdriver and see what's inside the box. This is how the board looks like: 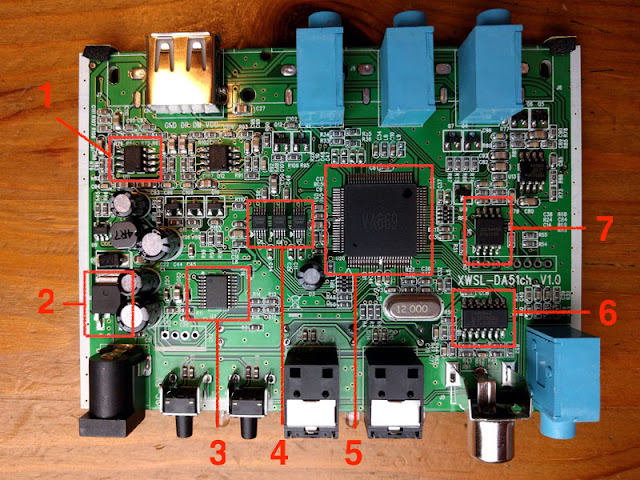 Most of the components are mounted on the top side. Some of the major components can be identified:

There are two mystery chips:

And this is the bottom view: 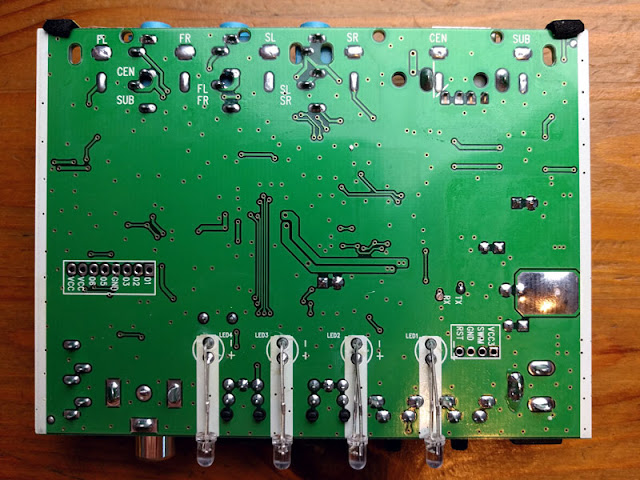 One interesting thing to note is that the labels and holes suggest that this board can be equipped with RCA output jacks per channel, as an alternative to three 3.5" stereo jacks and the 5 V USB outlet. This suggestion is confirmed in the manual:

I was wondering whether this device can be used in any serious setup, and for that I've hooked this device up to the inputs of MOTU UltraLite AVB audio interface.

I needed a test sound file that is AC3-encoded and contains measurement sweeps in all 6 channels. For that purpose, I took the measurement sweep file generated by FuzzMeasure, and used Audacity in order to create a 6-channel file with a sweep in each channel: 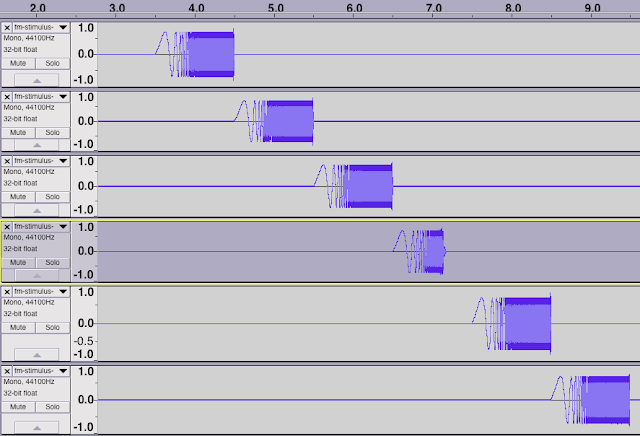 Note that ffmpeg library which is used to encode AC3 applies a lowpass filter to the LFE (4th) channel. This will prevent us from seeing the full performance of the LFE channel on the device.

Using a TOSLINK cable I hooked up the device to MacMini's optical output, played back the encoded file, and recorded the decoded analog output using MOTU.

The next discovery was quite a bad shape of the output waves. As one can see, the sine wave is severely clipped at bottom half-waves. This is how the source -3 dBFS sine wave has been rendered:

This is very unfortunate, and is probably caused by a bad design of the output stage. Looks like using the 4558 opamp wasn't the best choice in the first place, and the designers of this board seriously hindered its performance by failing to drive it correctly.

After looking at these horrible output sinewaves, I wasn't expecting a good frequency response, and indeed it's quite bad. Below are the plots for the left channel from a -3 dBFS input signal (blue), and for -6 dBFS input (orange), no smoothing:

The measurements for the remaining channels are the same as for the left—at least this device is consistent for all channels. Below is left channel (blue) vs. LFE channel (yellow):

This plot confirms that the LFE channel has the same output level as other channels, lacking the required +10 dB boost.

It's very funny to look into the "Technical Data" section of the manual for this device, stating: 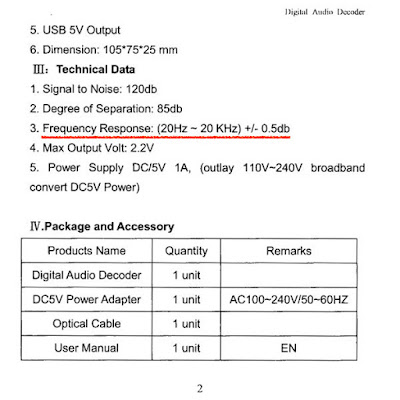 The authors tactfully omit the level of the input signals used in this measurement (if it actually was performed)—probably the level wasn't too high.

Looks like this family of devices can't be used in any serious setup. It will be interesting though to try to reverse engineer the electrical design of this board, and fix obvious flaws.