I want to tell a story about my current computer keyboard. A couple of weeks ago I switched to Kinesis Advantage2 keyboard. This device looks very unusual compared to most regular keyboards: 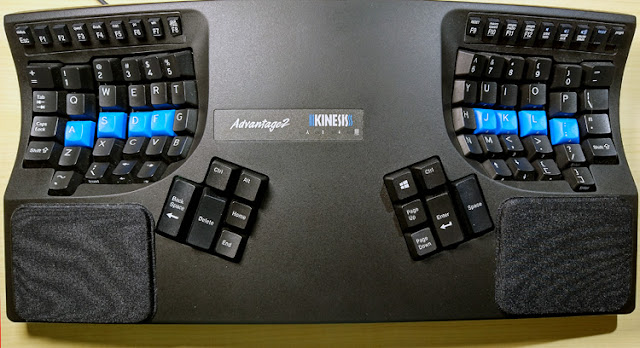 As you can see, the design brings the ergonomics to the extreme and fulfills several goals:

However, with this design a lot of keys were moved away from their usual positions. The most notable differences are for the arrow keys, brackets, and the keys that are located at periphery positions on traditional keyboards like functional keys, tilde, and plus.

I'm not new to ergonomic keyboards. For a very long period I used another keyboard by Kinesis called "Freestyle2":

As you can see, this keyboard is also ergonomic—it consists of two halves that can be positioned at various angles. However, its layout is more traditional and even somewhat superfluous—I've never made a good use of the "shortcut" keys on the left (mostly because I use actual shortcuts for all the actions these keys intend to provide, and I can't use them for anything else as the keyboard doesn't allow for remapping).

I'm in fact a big fan of keyboard shortcuts and learn them in any application I use more or less frequently. I can't imagine using GMail without shortcuts—at my job I receive from 100 to 200 emails per day. While I was still using Freestyle2 I started noticing that my right hand is aching after I had been using the bracket keys while going through my inbox (the bracket keys are used in GMail to archive the current email and go to the next one) and after active use of the arrow keys for navigating in Emacs.

The Advantage2 keyboard was sitting in my drawer for a long time (at the beginning of the COVID lockdown I had managed to get it at my company's expense) but I was hesitating to start using it due to its unorthodox layout. And as I've got the hand ache from using Freestyle2 I decided that it's a good opportunity to give Advantage2 a try.

I must admit, it took about 2 weeks until I could finally use it without an extra mental effort for finding keys. The most infuriating was "re-learning" the key combinations in Emacs. For a lot of them over the years I simply forgot what the actual keys are and was invoking them using muscle memory exclusively. Since the key layout on Advantage2 is different, I had to recall what are the keys used for the combinations and had to learn where to find them on this keyboard.

Now I can clearly see benefits of using Advantage2: no wrist or arm aching and typing feels more comfortable than on a traditional keyboard. Also, unlike Freestyle2 the Advantage2 keyboard is programmable, meaning that you can remap keys and even record macros. I actually did a couple of key remappings to make my typing more comfortable.

OK, but the back space is a really useful key after all—where should it go? I moved it to the nearby "Delete" key. It is still convenient for an active operation. Good, but "Delete" is also useful in various file managers as it allows deleting stuff. I found that on the left side Advantage2 has an "extra" key—another copy of the backslash key: 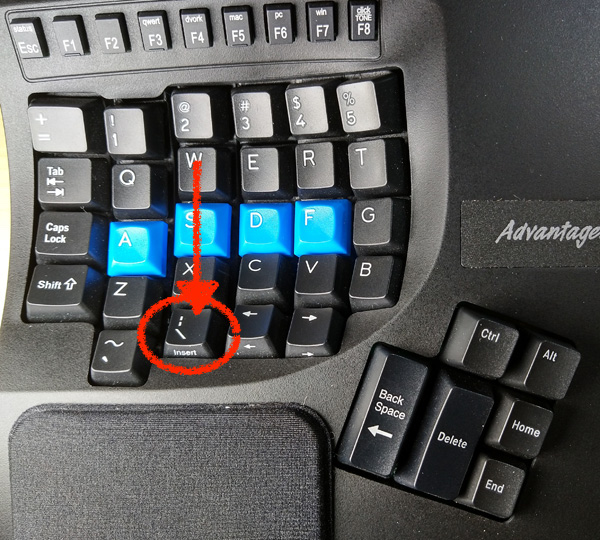 It's also used as the "Insert" key when you turn on virtual numeric keypad. So I thought it's a good semantical link between "Insert" and "Delete", and assigned the latter to this extra backslash key.

Finally, if you use Unix shells a lot you'll notice that the tilde key is used very frequently. On traditional keyboards it's located to the left from the number row. On Advantage2 for some reason this place was given to the "+/=" key and the tilde key was moved to the bottom: 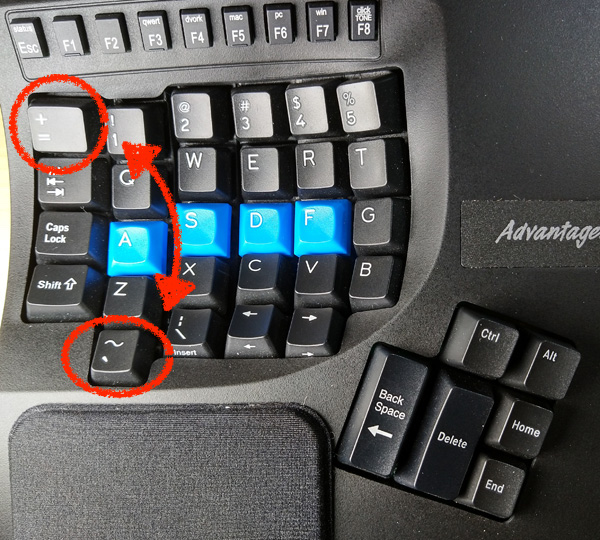 The natural solution is to swap these two keys. So this is the layout I ended up using: 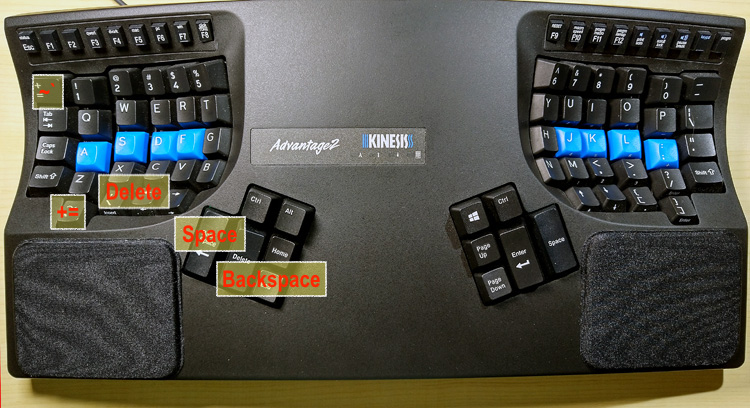 And yet another cool feature of this keyboard is that all remappings and macros are available as text files exposed on keyboard's internal USB drive. For example, this is how my remappings are specified:

This is what makes this keyboard a truly professional one.

For a long time I practice my typing on Tipp10 site. I know, there are myriads of similar touch-type training sites. What I like about Tipp10 is their scoring system which penalizes for typos. This stimulates you to type slower but with less mistakes and build up speed slowly. The site also allows for uploading your own typing lessons.

Building typing speed is something that doesn't come easy for me. I'm trying to find any book or instruction that would be based on a research on neuro-motor skills, but so far found none. The closest thing I found is this free book on playing piano called "Fundamentals of Piano Practice." It gives some practical advises on the exercises for developing finger muscles and improving finger coordination, which helps to build up speed and accuracy.

Of course, typing and playing piano are very different activities, however I believe that they share some goals. I've learned a couple of things from this book.

First is what they call "Hand Separate" practice. I've found that my right hand is somewhat weaker and less accurate than the left one, partially because I'm left-handed, and also because I had a minor injury of my right hand resulted from winter biking. So it helped to train this hand more intensely. This is where the design of Advantage2 is a real advantage—the hand zones are clearly separated.

The second technique is what the book calls "Parallel Sets" (PS for short). Their strong side is that they can serve both as diagnostic tests for the finger movement fluidness and as an exercise for developing it. The practice of the parallel sets is described to length in the book, so I will not repeat it here. This is just an example of custom typing exercises that I had created for myself in Tipp10 (for QWERTY layout):

And similar sequences for the right hand. There is also a variation where I type left and right hand interleaved, for example:

And similar sequences for the right hand. This exercise is actually challenging. I've found that it really helps to do it for each hand in isolation first.

In fact, all these exercises help to feel difference between keyboards. I was doing them in parallel on Advantage2 and Freestyle2 keyboards, and I immediately felt the convenience of curved hand wells of Advantage2 that helped to make the glide of fingers more fluid.

I'm glad that I have switched to this keyboard. Among positive sides I would specify:

And on the flipside:

I think Kinesis had understood these problems and at some point they have introduced "Freestyle Pro" keyboard which has the design of Freestyle2 and the customization engine of Advantage2. It is also cheaper than Advantage2, so seems like a good alternative to me.