Automatic Estimation of Signal Round Trip Delay, Part 2b

Let's continue examining jack_delay—I was curious, whether the method used by jack_delay is described anywhere. I tried looking for delay measurement methods used for "satellite ranging" (mentioned in README file), but it seems that modern GPS satellites use just a couple of frequencies, and effectively transmit binary sequences.

So I emailed Fons Adriaensen, the author of jack_delay, and he was very kind to provide more details. He told me that the algorithm was used about 30 years ago, and current methods used for satellite ranging are indeed different. Fons also described the algorithm in a more generic form. Later, I've found similar descriptions in books on radars. I decided to provide the algorithm description here.

I would start with a more generic version of the approach, as described by Fons and later discovered by myself in this paper by J. Clarke. Let Fb be the "base frequency" which defines the minimum step of measurement. We use N frequencies Fi each of them is defined as an exact integer multiple of Fb: Fi = Mi * Fb, where all Mi are larger than 1, and are pairwise coprime (that is, for any j and k from [1, N], j ≠ k: Mj > 1 ^ GCD(Mj, Mk) = 1). In this case, the sum of sine waves of frequencies Fi is also a periodic function with the period of ∏i = 1..N Mi * Fb, and the position within this composite period can be calculated by considering the current phase of each sine wave. This is basically what Chinese reminder theorem is about.

As we can see, the pairs comprised from numbers of these two sequences form a third sequence that starts repeating itself after 12 iterations (3 * 4). Thus, if someone provides us with a pair of corresponding numbers from the first two sequences, say (0, 2), we can unambiguously find their position in the composite sequence, which is 6.

The position is then calculated as a sum modulo m1 * m2:

When using multiple frequencies, the classical approach would require us to perform the derivation of the delay in a single step for all frequencies, as J. Clarke's paper illustrates.

However, as we have seen in my previous post, jack_delay uses a loop where it considers the phase of each minor sine wave separately against previously calculated yet still incomplete delay value. The algorithm uses real (floating point) numbers for representing the current delay value, and the phase of the current sine wave. But it later transforms the result into an integer number, thus we can enumerate intervals of the real functions, and work with integers instead. 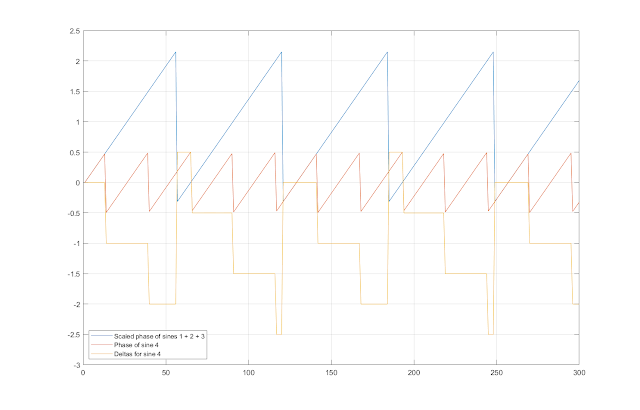 Recall that f0 is 4096 and the values for N start with 4. This is basically the same conclusion we have made in the previous post, but now the requirements for the values of M are fully understood, and the underlying mathematical principle for determining the delay is explained.

Since the algorithm depends on uniform signal phase propagation, anything that affects the phase of the signal in a non-uniform way affects the outcome of the measurements using this method. On the other hand, a lot of other issues in the transmission channel have no effect.