As I had mentioned a couple of times (see this and this posts), I drive my DIY LXmini speakers from QSC SPA4-100 power amplifier. I had chosen it because of its compact form-factor (1U half rack) and power capabilities (4 x 100W channels) that fit perfectly the LXmini use case. Finally, I've got time to do some measurements on it. While I'm very much satisfied with the sound I'm getting from this amp + speakers, there are a couple of questions I want to get an answer for:

I decided to measure the amp in 4 Ohm output mode outputting into 4 Ohm and 8 Ohm loads. This corresponds to the nominal impedances of LXmini's full range driver (SEAS Prestige FU10RB H1600-04) and woofer (SEAS Prestige L16RN-SL H1480). For the loads I used wire-wound resistors attached to massive heat sinks.

Below is the table of results obtained by driving one channel of the amp with a 1 kHz sine signal from QuantAsylum QA401. The voltage was measured over the load using Agilent U1252B TrueRMS multimeter:

Trying to go above -4 dBV for a balanced input was tripping the input limiter. This is consistent with the manufacturer's specification for the input sensitivity which is +4 dBu = 1.78 dBV ~ -4 dBV of balanced input (doubling of logarithmic voltage is approx. +6 dBV increase). The gain of the amplifier for unbalanced input is 24.5 dB. In balanced mode it's slightly above 30 dB.

Output power figures are also consistent with the manufacturer's specification. Maximum output power is achieved when maximum allowed input is provided. It can also be seen that the maximum is not achievable when using unbalanced output as the input voltage is limited. This is important as miniDSP 2x4 HD only has unbalanced outputs. They are specified as having 2 Vrms = +8 dBu maximum level, so it's possible to hit the limiter when setting the output gain on miniDSP too high.

I must say that the resulting sound power from LXminis together with the subwoofer so far was enough for playing quite loud in my living room. But it's good to know that power output can be increased if I switch to balanced inputs on the amplifier.

For these measurements I hooked up QuantAsylum QA401 in parallel to resistive load. There is a caution in the amplifier manual warning against connecting any output to the ground. I suppose, trying to do that will trip the short circuit detection circuit in the amplifier. So I used differential connection instead, leaving probes ground connectors floating.

The lowest THD was achieved while driving an 8 Ohm load in 4 Ohm output mode (the picture was taken while using balanced input to the amplifier): 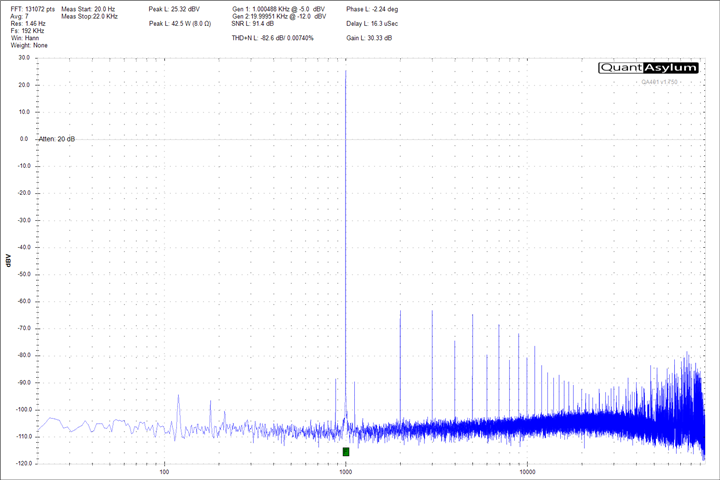 Note that there are two small "spikes" around the test frequency which look surprisingly similar to jitter peaks from DAC tests. I suppose, it's totally possible with Class D amplifiers as they effectively sample the input signal. Thus, small variations in the frequency of the triangle wave generator used for sampling can cause some samples to be off by a small amount. Although, there isn't much worry about that as these spikes are below -110 dB from the main signal, so they are inaudible. Harmonics and aliases also look very small compared to the main signal. 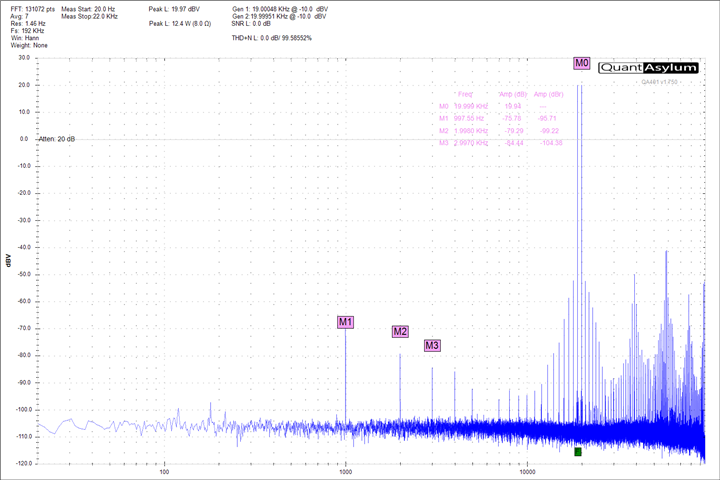 Looks like the antialiasing filter is "slow". Indeed, we can see that from the FR graph: 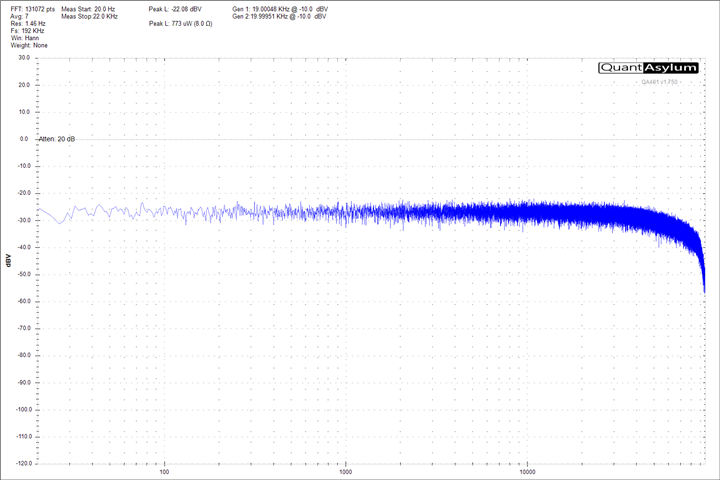 I also saw similar weak filtering on Monoprice's Class D amplifier and at that point decided that it's because it's a rather cheap model. But now I'm seeing the same on a more expensive amp. Looks like manufacturers decided to use a weak filter to avoid compromising power output. Out of curiosity I also tried measuring the frequency response with a real speaker load, hoping that the inductivity of the speaker would act as a low pass filter, but instead I've got absolutely the same graph. It's good to be aware of this issue. 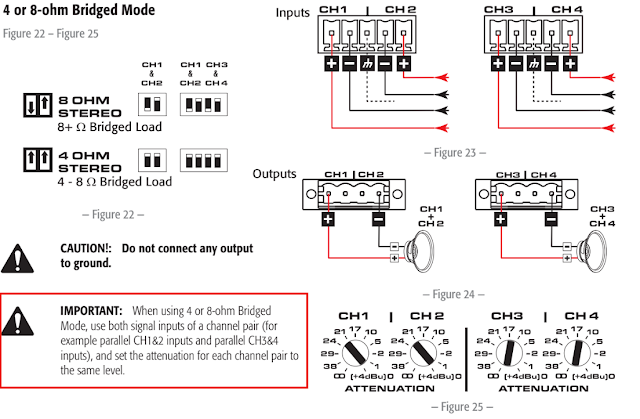 This forced me to pause and think a bit about what does that mean for Channels 2 and 4 in non-bridged mode. Since there is no switch for the bridged mode, the amplifier always works the same way regardless of whether we use it for driving two channels in single ended mode, or one channel in bridged mode. For Channels 1 & 3 this doesn't cause any issue—the positive wire of the output gets driven by the amplifier. But what about Channels 2 & 4? It seems that they must be driven via the negative wire of the output and in an inverted phase. Is that true? To answer that, first I connected QA401 left and right inputs to both ends of the load connected to Channel 1, L (blue) to "+", R (red) to "-": 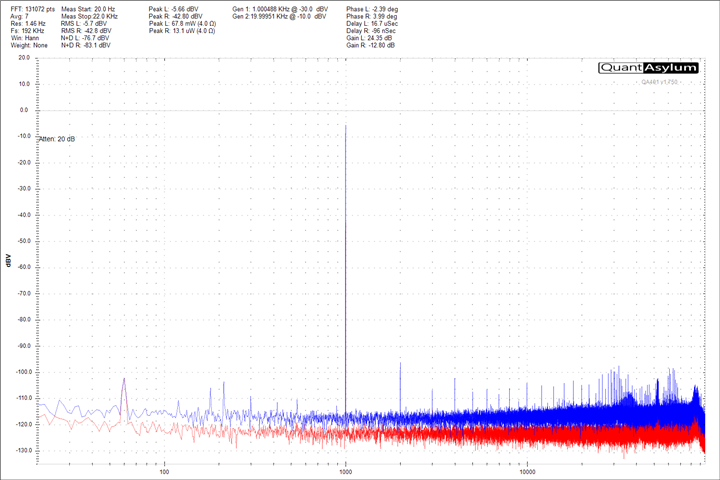 We see a natural voltage drop across the resistive load confirming that the amplifier only drives the "+" wire. What about Channel 2 (connections are done the same was as for Channel 1): 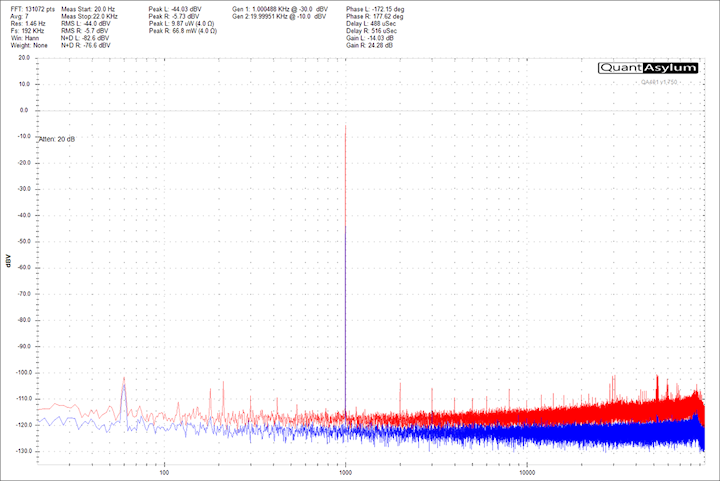 Yes, it's completely opposite—the "-" wire is active! For checking signal phase I connected the left input of QA401 to "+" of Channel 1, and the right input to "+" of Channel 2. Since the positive wire of Channel 2 receives attenuated signal, I adjusted the attenuator on Channel 1 to make the levels to be similar: 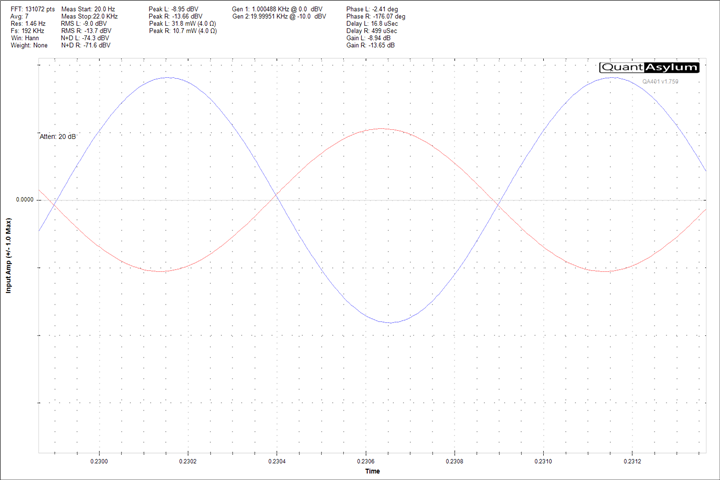 In time domain, we can see that Channel 1 and Channel 2 are driven in opposite phases.

Wait, does it mean that Channels 2 and 4 have inverted polarity when the amplifier is used in single ended mode? Actually no, because speakers are differential devices. I'll talk about this later. Just in order to verify that the polarity is correct, I connected two identical speakers the same way to Channel 1 and Channel 2, placed a microphone between them and ran Acourate's "Microphone Alignment" procedure: 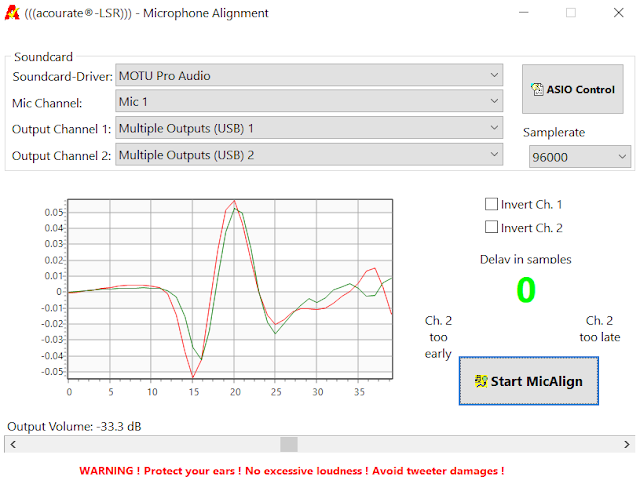 As we can see, both speakers are in phase, no need to worry. Let's continue to measurements.

I ran a couple of measurements into 4 Ohm load in bridged mode from an unbalanced input.

As we can see, the voltage gain in bridged mode from unbalanced input is the same as for single ended mode from balanced input—30 dB. Doubling the output voltage allows for almost 4x increase in the output power—compare 68.5 W into 4 Ohm from 0 dBV that we have seen for the single ended mode vs. 268.5 W from the same input in bridged mode. Nice! But what about distortion?

Unfortunately, distortion doesn't look good. I had to lower the input level to -10 dBV to avoid clipping on the input of QA401, and distortions graph from a 1 kHz input looks like this: 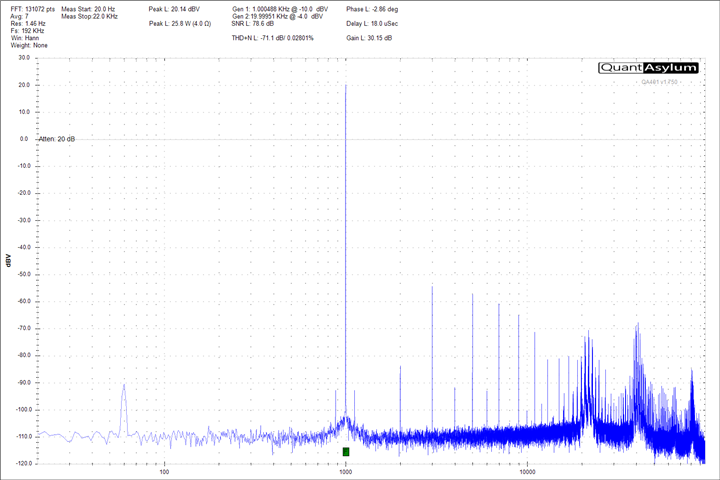 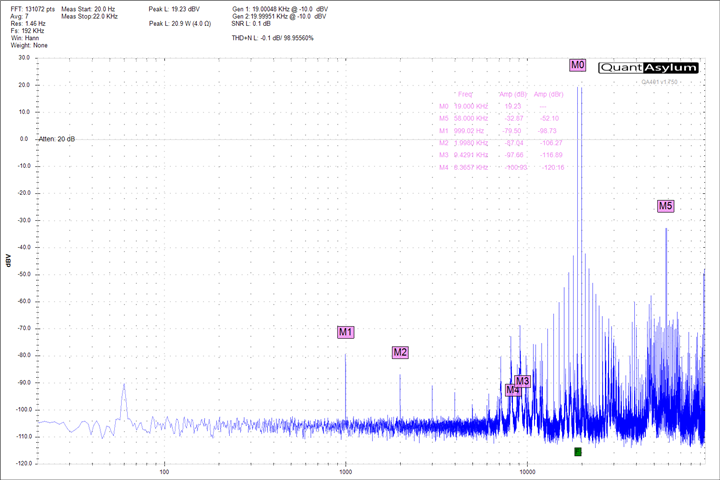 And remember, that's for 10 Vrms output (28.4 W power). In single ended mode even 20 Vrms output produced much less distortion. Clearly, the bridged mode of this amplifier is designed for something like PA applications, not for high fidelity.

Conclusions on the QSC SPA4-100 Amplifier


Answering the questions I've stated in the beginning of this post. We can see that this QSC amplifier is way more linear in its best operating mode (single ended) than cheaper Monoprice in its best mode (bridged)—just take another look at the graphs in the post about Monoprice.

Also, QSC's capabilities are specified much closer to real measurements than what Monoprice had specified. And clearly, higher price point of QSC is fully justified.

The bridged mode produces higher distortion even at lower input signal levels. This can be explained by the fact that each driving amplifier in this case "sees" twice less load. As we have observed on the 4 Ohm vs 8 Ohm load, distortion in this amplifier increases as the load impedance decreases. I suppose, it increases even more with 4 Ohm load gets divided in half by bridging.

What is common for both amplifiers is that there are some visible ultrasonic artefacts that are not filtered out even when using a real inductive speaker load. So actually, driving some sensitive speaker at high output level may overload and even damage it due to excessive high frequency energy.


We can see that the audio engineers at QSC are very creative. As we have observed, the same speaker can be driven by this amplifier in 3 modes:


Does it make any difference to the speaker? In fact, no because what speaker "sees" is the difference of potentials between its "+" and "-" terminals. Say, we have 1 V (relative to some arbitrary reference point) applied to "+" terminal, and 0 V applied to "-" terminal. The speaker "sees" 1 V - 0 V = +1 V voltage. This voltage drives the cone forward (if enough current is supplied by the amplifier).

This is why it's possible to drive a speaker from the "-" terminal using an inverted signal. The speaker will behave the same as if driven from the "+" terminal using the signal in the original phase. Same thing happens if we drive the speaker from both sides. The only participant for which bridging matters is the amplifier. After internalizing all this stuff, I've re-read the post from Benchmark Media about myths of balanced headphone connections and this time I understood every word from it. Practicing with amplifiers helps to understand the theory!
Posted by Mikhail at 9:55 PM