Case Study of LXmini in Our New Living Room

This summer we moved into a new rented house and finally I got some time to set up LXmini in this new environment. I've learned a lot while doing this and hope that sharing this experience could be useful for other people.

Initially I was planning to recreate my old 4.1 surround setup with two pairs of LXminis as front and surround speakers + KRK 10s subwoofer (only for LFE channel). However, I tried watching a couple of movies on a temporary stereo setup of LXminis and decided that stereo image they create is immersive enough and I don't want to complicate the setup with another pair.

The challenges I faced while getting the stereo setup right were different from what I had in our old apartment. First, we have bought a tall wide console for the computer and XBox, and I learned that the console creates strong reflections if speakers are put too close to it. On the other hand if I set the speakers further from the console, they get either too close to the couch or to the side wall. Second, this time I decided to use the subwoofer as a low frequency extension for LXminis but didn't want to compromise their excellent output.

This is a schematic drawing of the room. Note that the ceiling is quite high and sloped. This reduces vertical room modes significantly. The bad news is that the listening space is asymmetric and narrow. Below are views from the top and from the side, all lengths are in meters: 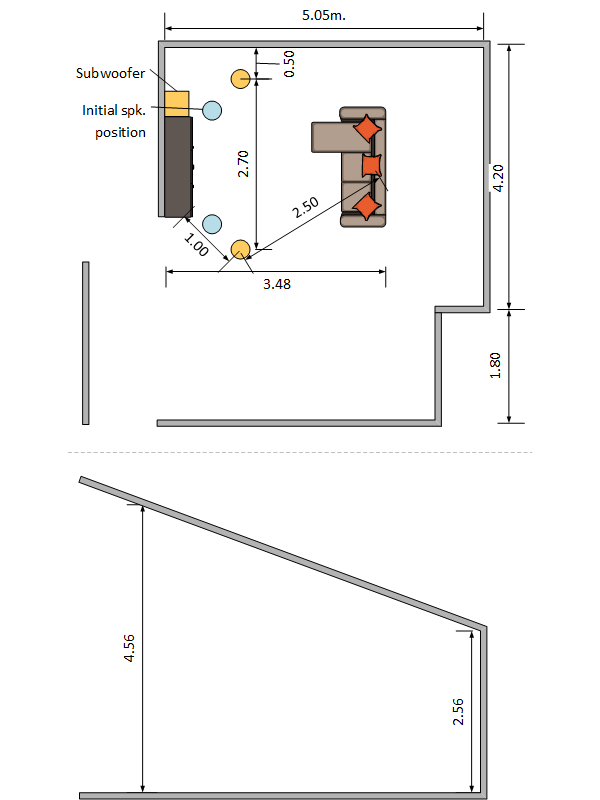 Blue circles represent the positions of the speakers in my temporary setup. The orange circles is the final setup. I've spent some time looking for the best placement and used a number of "spatially challenging" test tracks:

When the speakers were placed too close to the console, LEDR was sounding smeared and so were the phantom center tests. ETC curves were also showing some strong early (< 6 ms) reflections: 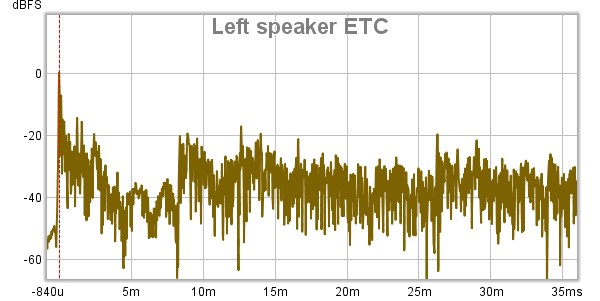 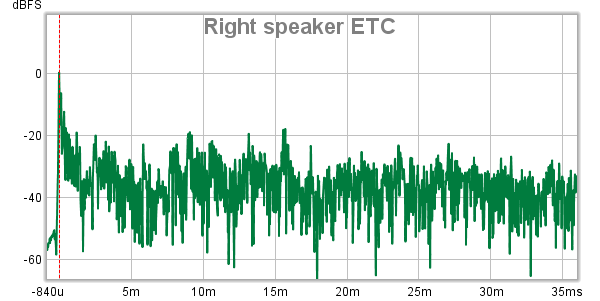 I moved the speakers further from the console and placed them wider, so they didn't get too close to the couch. Though, the right speaker was now too close to the right wall. Fortunately, the reflections from the wall can be defeated by rotating the speaker appropriately. The hint that I've read in the notes of S. Linkwitz was to put a mirror to the wall and ensure that from the listening position I see the speaker from the side. Since LXmini is a dipole speaker there is a null at the side, thus the most harmful reflection from the nearby wall is minimized. We can see that on the ETC graphs from the new position (the graphs from the initial position are blended in for comparison): 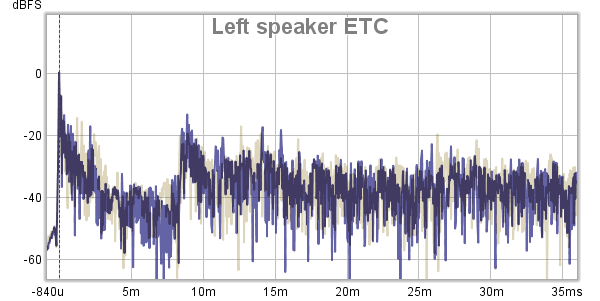 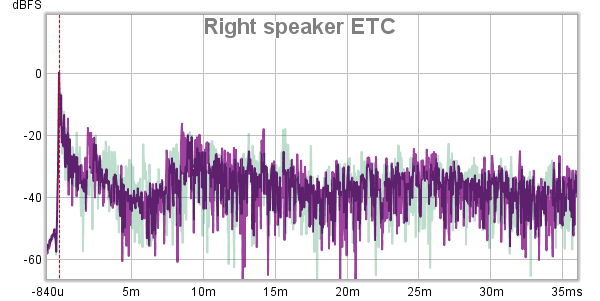 Playing the test tracks has also confirmed the improvement—now I can feel the rattle sound in LEDR moving in vertical and front-back directions clearly. Also, by avoiding creating strong reflections for the right speaker, I've made it essentially equal to more "spacious" left speaker placement, thus the asymmetry of the listening space doesn't matter anymore. However, the resulting "aggressive" toeing in of the right speaker has narrowed the listening "sweet spot". Apparently, it's not easy to achieve a perfect setup under real life conditions.

From my previous measurements I knew that the quality of the speaker drivers used in LXminis make them well matched. However, my initial measurements has shown some discrepancy which I wanted to correct:

I'm not a fan of excessive equalization—I believe that our brains are a much more powerful computers than our audio analyzers. But adding a couple of filters to correct for speaker placement seems reasonable here. In this case, I reduced the amplitude of one of the notch filters in LXmini equalization and added a couple more filters:

Note that I didn't do anything below 50 Hz because I plan to use the subwoofer with the crossover frequency at 45 Hz.

Then I adjusted KRK 10s to inhibit its output in the range of 30–60 Hz to "boost" its output at 20 Hz. Here I used filters suggested by Room EQ Wizard for the listening position: 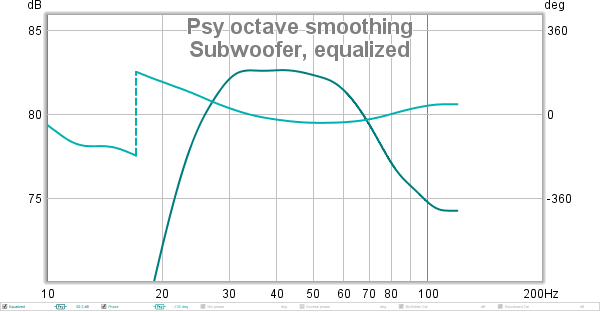 This was the most challenging part. I connected subwoofer using a cascaded miniDSP 2x4 HD in the following way:

Additional processing delay, phase shifts, and asymmetric positioning together create a framework which is challenging to analyze. Instead, I decided to apply the approach suggested by the author of Acourate software Dr. Ulrich Brüggemann. The procedure consists of the following steps:

As I've learned from my experience, aligning based on a single frequency in the Step 3 may not provide the best results as at low frequencies the phase and the group delay of speakers may fluctuate severely. So instead of using a single sine wave I used a log sweep range in the bass region. This doesn't provide data for aligning initial transients, but for bass frequencies I think the sustained stage is much more important.

Here is how convolutions with a log sweep from 40 to 100 Hz were looking initially for the left and right speaker: 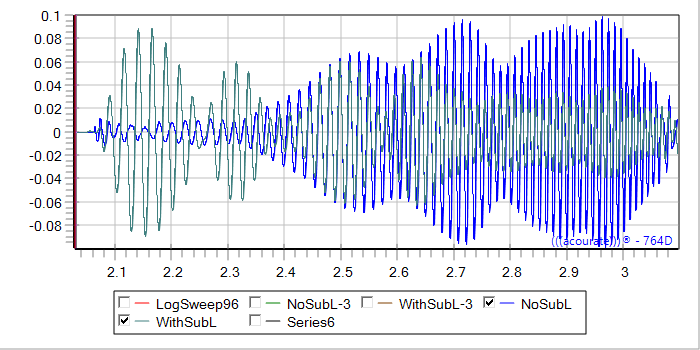 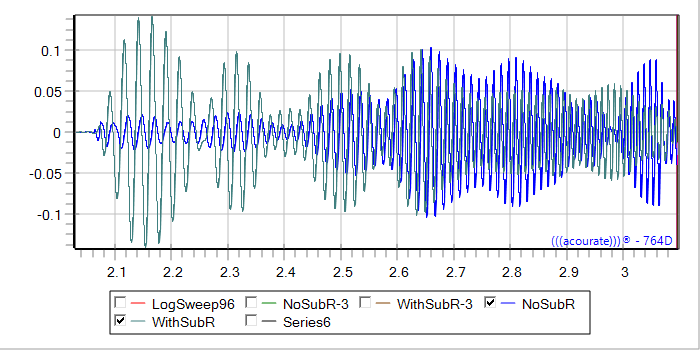 The left graph is mostly aligned, while the right one shows a delay of the main speaker for 2.5 ms. It can be seen that even on the left speaker, the alignment in the low bass region is poorer than at higher frequencies. I don't consider that to be a problem because there the contribution of LXminis is negligible. It's much more important to time align the region where both the sub and the LXminis can be heard together. It's also easy to see that if we attempt to use the crossover frequency (45 Hz) as the anchor point for time alignment, the speakers would be out of phase for higher frequencies which will result in "sagged" frequency response.

To avoid compromising the alignment of the left speaker, I decided to delay the sub for 1.25 ms which improves alignment for the right speaker, but doesn't degrade it too much for the left one. Below are the graphs of LXminis filtered with Linkwitz-Riley 24 dB/oct crossover at 45 Hz and with added subwoofer:

Definitely we can see extended bass range. You can also feel it :) I think, setting the crossover point low allows to get the maximum fidelity from the LXminis + subwoofer combination.

With all this laborious setup done, it's time to enjoy music!