While watching this YouTube video that analyzes the transfer function of the older model of the BBE Sonic Maximizer—the 802 model, I've noticed one thing that I miss on the current generation of Maximizers—the ability not only to boost high frequencies (HF), but also to attenuate them. Out of curiosity, I've bought an 802 unit on eBay and performed the same measurements I've done previously for 282i.

But first, I looked under the cover of the unit to see if it's based on the same NJM2153 chip as the 882 model, and I've found out that it in fact isn't! This is what we can find inside:

The first thing we can see is a pair (one per channel) of giant chips marked "BBE." That's the original "sound enhancement" chip. It's interesting, that compared to NJM2153 package which has 20 pins, of which 18 are actually used, this "BBE" chip only has 18 pins, minus 1 not connected, thus only 17 are in use: 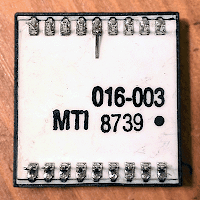 It would be interesting to figure out what is the extra input that NJM2153 receives compared to the old BBE chip, but for that I will need to trace the connections on the board. Although, that shouldn't be hard since the board has in fact only one layer, I'd leave that for some time later.

The other chips we can see here are opamp assemblies. There are 3 of them per channel:

These are pretty much the same components that are used in the 882 model, except that 882 uses electronic balancing of inputs, and for that purpose it employs two more pairs of NE5532. Whereas 802 only uses old school transformer balancing (you can see a pair of small transformers per channel.)

I'm presenting the measurements in the same order as for 282i here.

Unlike 282i, this 802 unit doesn't affect group delay at all when it's in bypass mode. From what I've seen in the frequency response measurements, when in bypass mode, the 802 excludes all its circuits from the signal path, which perhaps isn't true for 282i.

So, this is the group delay plot when processing is enabled:

The numbers are pretty close to what manual is saying, discounting by this unit's age. We can conclude that this functionality didn't change much with the Maximizer evolution.

Here the things are becoming more spooky. Look at how harmonic distortions increase when the unit is in processing mode (orange) versus the loopback measurements (black):

The faint line is the level of 3rd harmonics—it reaches 0.1% for middle frequencies and crawls up to 1% for bass. Although, it doesn't contradict the official specs—they say "less than 0.15% @ 1 kHz", this is much worse than the modern 282i shows.

According to John Siau's calculations, 0.1% of distortions translates into -60 dB noise below playback SPL, which can be audible.

So, what about the ability to attenuate HFs, is it really there? Yes, indeed:

As we can see, setting the "Processing" knob to the minimum position ("1") attenuates the HF by 6 dB. Setting it to the middle setting ("5") provides a flat-ish response, and turning "Processing" all the way up produces a bump at about 4 kHz.

However, we can also see that HF roll down quickly after 10 kHz on any setting, which is much less exciting. The modern versions of the Maximizer demonstrate a flat FR up to 20 kHz (when the knobs are at their minimum positions.)

Finally, what about that non-linear frequency response that we have seen on 282i and that effectively acts as an expander for HF. Yes, it's there: 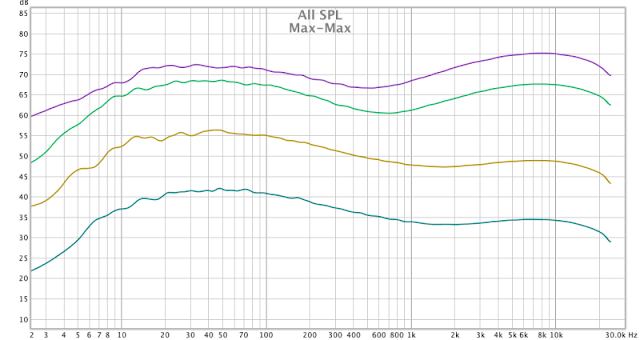 (Note that the graphs were produced using white noise as a source signal, thus at low frequencies the plots are wiggly.)

With both knobs at the maximum setting, we can see that the 802 unit doesn't boost the HF if the signal level is low. Even more interesting picture is when the "Processing" knob at the minimum level: 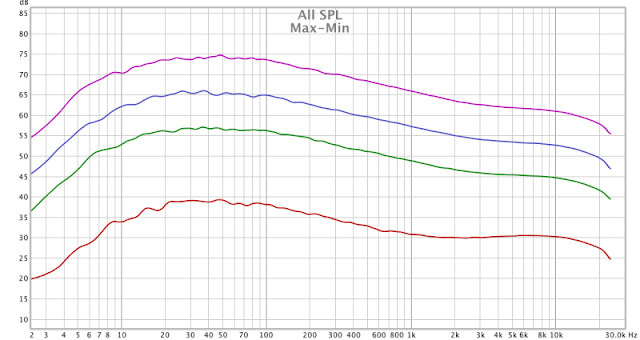 As we can see, at low signal levels, the HF are less attenuated, so the unit works as a compressor! If we align the lowest (red) plot with the highest (magenta) one at 1 kHz, the delta at 6 kHz is about 4 dB.

The older BBE Sonic Maximizer model 802 provides some interesting abilities to manipulate high frequencies not available in the modern models, but unfortunately suffers from high distortions level, and compromised frequency range. Perhaps, at the time when it was introduced (around 1980-s), these specs were acceptable, but currently they clearly don't meet the bar. So unless you intend to process sources that by their nature has high distortions and reduced frequency range (e.g. analog tape), there is absolutely no point in using this ancient unit.