I've got some progress playing with ARTA and harnessing Windows:

I tried following the measurement procedures of NwAvGuy in his posts about audio interfaces and headphone amplifiers. He used Prism dScope, and it's interesting to compare its capabilities with the ones of my hobbyist tools.

Another reason is that the balanced line input has more headroom, and it's impossible to overload it while driving from the unbalanced out.

I started with THD. It can be measured with ARTA and STEPS. With ARTA, it's only possible to test one frequency at a time. Here are measurements at 0 dBFS for 20 Hz, 1 kHz, and 20 kHz. All the measurements were done with 96 kHz sampling rate: 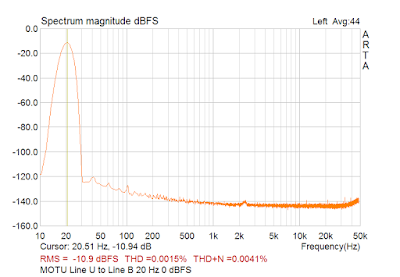 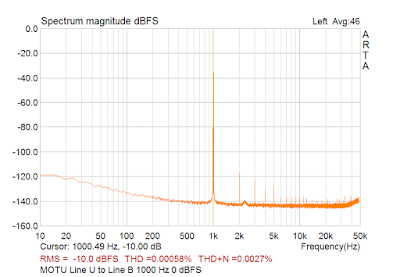 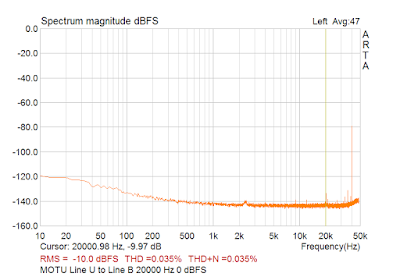 As I mentioned above, I started using averaging as it thins down the noise plot, so we can see the noise floor more clearly.

The balanced input has 10 dB of headroom, so any distortion products that we see are likely caused by the line output. It's also interesting that all graphs show a small noise bump between 2 and 3 kHz.

This is full noise profile obtained with STEPS. There I had to limit the test signal to -3 dBFS because otherwise it was overloading the output: 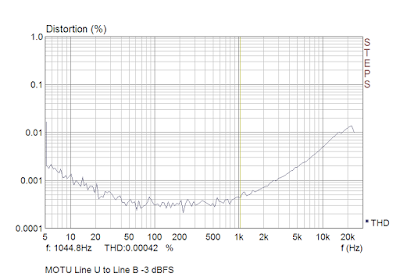 This agrees with the results from ARTA—the level of distortions is lowest at the midrange, slightly higher at bass frequencies, and raises steadily at high frequencies. 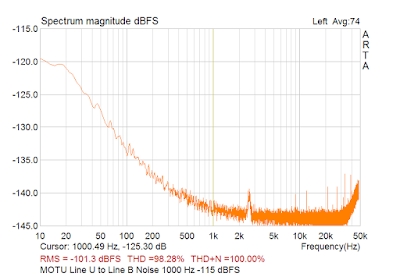 Starting from 400 Hz the level of noise is mostly below -140 dBFS. The strange peak between 2 and 3 kHz can be seen again.

I used both CCIF and SMTPE methods, as ARTA provides both. CCIF at 0 dBFS was giving a lot of distortions which were gone at -1 dBFS, but I decided to stay at -3 dBFS for consistency with other measurements: 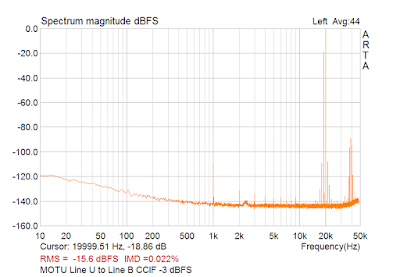 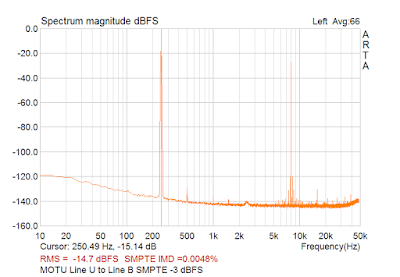 SMTPE IMD at 0 dBFS (not shown) is also a bit worse than at -3 dBFS but not so radically as with CCIF test signal. 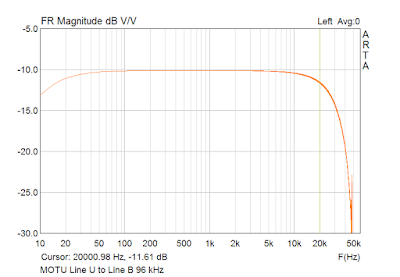 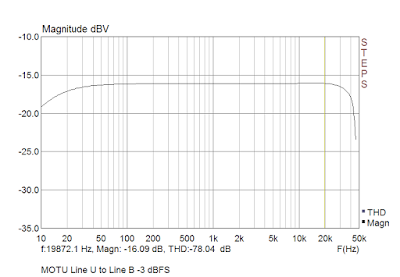 As we can see, STEPS curve has less steeper rolloff at high frequencies. The STEPS manual says that FR measurements done with its method are more precise than the measurements using periodic noise. If we zoom in the STEPS curve we can see a small bump of the antialiasing filter, but it's smaller than at 48 kHz sampling rate—it wasn't even visible on the previous graph: 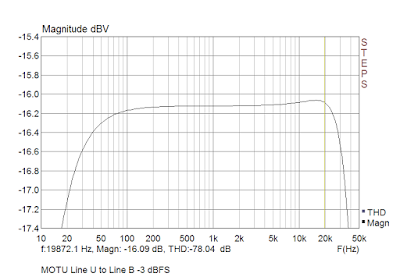 To me, the FR measured by STEPS is more realistic. It also looks similar to what John Reekie published in HiFiZine.

What I Did Not Measure

NwAvGuy also provided measurments for inter-channel crosstalk and DAC jitter. ARTA doesn't provide a measurement mode for the former, so I've attempted to measure crosstalk by cris-crossing the output lines. This way any inter-channel leaking of the test signal would show up on the measured channel. But the results are very different between ARTA and STEPS so I decided to study more about how to perform it correctly.

As for jitter, ARTA does measure it, but I'm not sure how to measure jitter for 96 kHz sampling rate. Usually jitter is measured with a sine signal of 1/4th of the sampling rate. But for 96 kHz this would be 24 kHz, and as as we have seen from THD measurements Microbook has somewhat high distortion at high frequencies. So I will also read more about how to perform this measurement correctly.

I also did not attempt doing time domain measurements, e.g. the square wave test. Will try next time.

And now some re-measurements of my Soundcard Interface (SCI), this time made at 96 kHz sampling rate and with both ARTA and STEPS, so they are directly comparable to the MOTU loopback measurements.

For the measurements, the left channel of MOTU's unbalanced line output was connected to the SCI's BNC input, grounded. The SCI input sensitivity was set to 2V setting. SCI was powered from an USB power bank to avoid creating a ground loop.

Same method as was used for MOTU loopback: 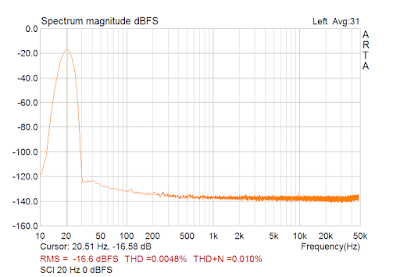 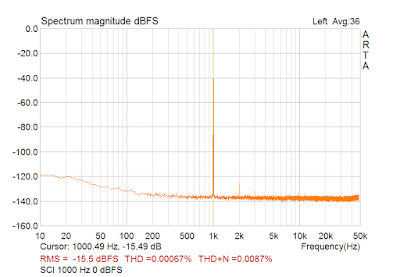 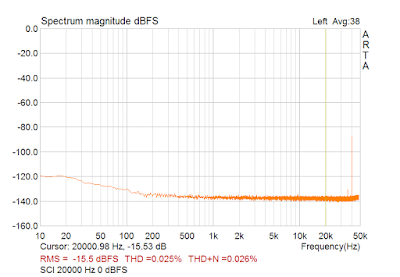 As we can see from the RMS figures, SCI attenuates the signal by almost 6 dB. It could be the reason why the bump between 2 and 3 kHz originally seen on MOTU loopback measurements is almost gone. If so, then it must be an artifact of MOTU's line in.

Here is a full THD profile obtained with STEPS: 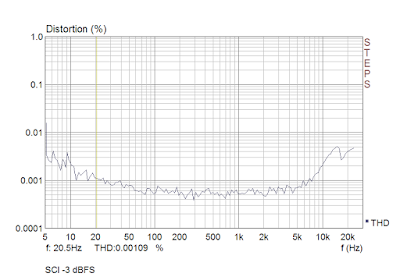 The differences THD between MOTU loopback and SCI are quite small (which is good!), see the summary table at the end of the post. 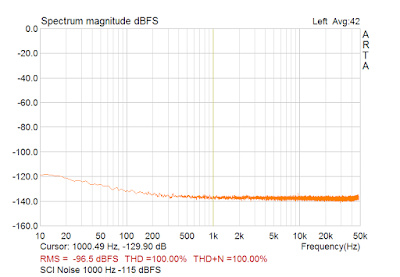 Although, I forgot to zoom the graph in before taking the hard copy. But even at this scale, it can be seen that comparing to MOTU loopback, it is higher by about 5 dB starting from 200 Hz. Overall, the profile is quite even, and there are no problems at 60 Hz.

The signal level was at -3 dBFS to avoid any distortions from the MOTU's out: 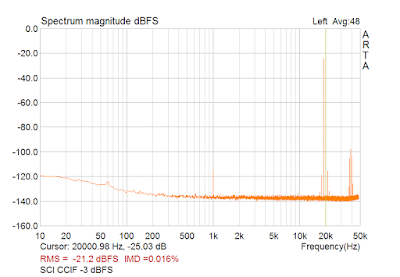 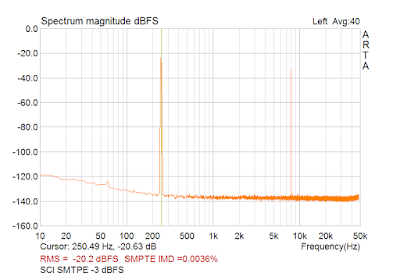 I used both ARTA and STEPS in two channel mode. The reference channel was a direct loopback from MOTU's line out to in, thus the obtained frequency response is not affected by MOTU's not so ideal characteristics. ARTA and STEPS have produced quite similar curve for SCI's FR, so here is the one from STEPS as it is less fuzzy: 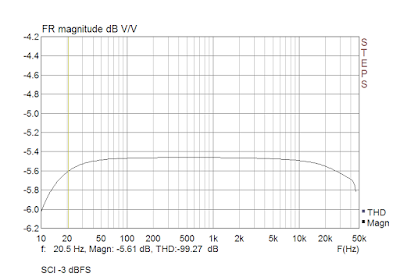 So let's compare the numbers from MOTU loopback and SCI measurements:

As we can see, the main drawback of SCI is the increase of the noise floor by about 5 dB. Note that the high noise figures are mostly due to the low frequency range. Above 200 Hz both MOTU and SCI are quite good. Although, specialized measurement frontends like affordable Quant Asylum QA401 have much more even noise floor across the entire measurement range.