After I've shown my Headphone Dummy Load post to Warren, he kindly noted that using 35 W power resistors for this project is probably an overkill and suggested to do calculations on the power rating of the PCB I used.

I looked at Sparkfun's product page for board specs, but unfortunately there are none. So I downloaded board design files and opened them in Eagle. After examining the board layout, I've figured out that the trace width used on the board is 0.032". Using EEWeb online PCB trace max current calculator, I've obtained the following estimation: 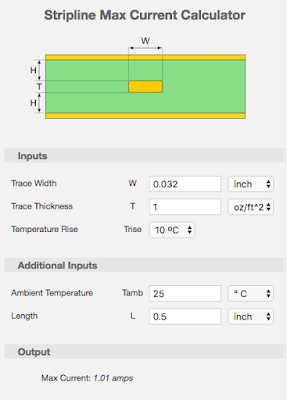 Max current that this PCB can hold is 1 A (I used 1 oz/ft2 as trace thickness as suggested on the PCB basics Sparkfun page).

What is a typical headphone signal current? I've conducted a little experiment playing a 1 kHz sine wave through a Mayflower O2 headphone amp / DAC connected to my dummy headphone load set at 33 Ohm and obtained the following figures using a "True RMS" multimeter:

From P = I * V formula, it seems that a 35 W resistor can withstand up to 35 A at 1 V. That's a lot more that I would ever need and 35 times more than the PCB itself can handle. I could just use a 3 W resistors instead which cost less than $1 each instead of $5 that I paid for these power resistors. Good to know!