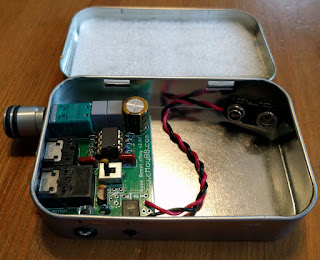 As an exercise in soldering, I decided to make a CMoyBB from a DIY kit offered by JDS Labs. And I'm pretty much happy with the result! Not only the completed device can actually be used, but it also offers quite a good sound.

I tried using the amp both with a mobile phone and with a DAC (ObjectiveDAC also built by JDS Labs). I've found that with a DAC, since it outputs at line level, the resulting gain is quite high and isn't very comfortable with low-impedance headphones (I used Beyerdynamic T5p, they have an impedance of 32 Ohms)—playing any pop music with compressed dynamic range required the volume on the amplifier to be set quite low. Though with a mobile phone as a source the resulting volume is acceptable.

CMoyBB also offers bass boost setting which I enjoyed when using it with AKG K240 headphones that are very neutral by design.

I was also interested whether my assembly has any flaws from electrical point of view. I couldn't detect any issues "by ear", so I decided to try to measure the device. I have a spare Creative / E-MU Tracker Pre sound interface which unfortunately only has outdated drivers that do not work with the latest versions of Mac OS and Windows. But it is happily supported by Linux. The only problem was to find any software for performing tests. After looking for RightMark equivalents, I've found LXsndtest. The app is a bit outdated, too—it relies on legacy OSS sound API, and only supports measurements in 16/48 resolution, but for my humble purpose this was fine.

First I set up a rig to test performance of the sound card itself—connected inputs to outputs directly using unbalanced TRS to RCA transformers. What I've learned is that sound input must be turned off in the system sound mixer, otherwise a feedback loop is created. Then I connected my CMoyBB and adjusted its volume level to match what I've had with loopback.

Below are frequency spectrum graphs for pink noise ("Noise" measurement mode of LXsndtest), on top is loopback, below is CMoyBB (with bass boost turned off):

Not a big difference! The response is pretty much the same. Left / right balance has become a bit worse—because the amp had to be set at moderately low level. While finding the right volume setting I've noticed that the balance becomes pretty much skewed at very low volume level of CMoyBB (that's normal for inexpensive headphone amps). Noise levels (bar graphs that LXsndtest displays under the spectrum graph) are pretty much the same, too.

I also tried "Distortion" mode of LXsndtest for 1 kHz sine wave signal, and didn't find much difference between loopback and CMoyBB as well (loopback results are on the left, CMoyBB is on the right):

The actual figures don't make much sense by itself—as I've already mentioned, LXsndtest only measures in 16-bit mode, and since Tracker Pre has analog input level controls, it's quite hard to adjust the signal level to use the entire 16-bit range. As one can see, I've only managed to achieve effective 13/14-bit signal level. But again, the main result is that there is no measurable difference with this kind of testing equipment.

What about the bass boost mode of CMoyBB? Definitely, we have a boost:

There is a +8 dB bump here (JDS labs spec says it's +9 dB), which results in more than a 2x perceptual bass volume increase.

The conclusion here is that CMoy headphone amp, and especially the JDS Labs version of it is a great DIY project for a beginner electronic hobbyist.

(JDS Labs is not a sponsor of this post and did not endorse it.)