In order to figure out whether it's actually possible to distinguish between reasonably transparent headphone amplifiers I've decided to build a switch box. It's as simple as wiring together three TRS sockets and a 3-pole 2 positions switch. But knowing what amplifier one is listening to can affect the outcome of evaluation. The key to making unbiased judgements is blind testing and randomization.

So I decided to add to the box a "shuffling" switch. The idea is that the person evaluating two amplifiers doesn't know which one is currently active, that is, which amplifier is bound to which position of the switch. This binding is chosen randomly by an assistant, unbeknown to the evaluating person. Schematically the setup looks like this:

The "shuffler" and A/B Switch are encapsulated into one physical box. It looks like this:

As you can see, the state of the shuffling switch (labelled I / O: "Inverse" and "Original") on the back (left photo) can not be seen when looking at the front panel which hosts the A/B switch (right photo).

The shuffling is implemented trivially, here is the diagram for a pair of wires from "A" and "B" inputs:

Since stereo signal needs 3 wires, this schematics need to be triplicated. Thus for shuffling a 6-pole 2 position switch has to be used, while the A/B switch is a more common 3-pole 2 position.

As one can see from the diagram, there are 2 points where 3 wires need to be connected together (6 points in total for full stereo signal). I've found it handy to use Sparkfun's Square 1" Single Sided proto board, which features connected groups by 3 of through-hole contacts. The inside of the switch box looks like this (the board is on the right): 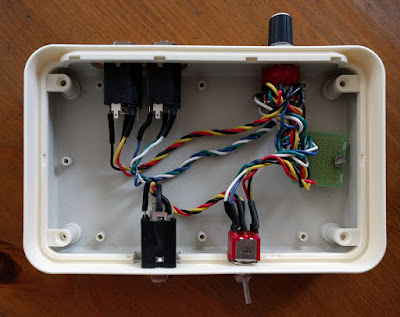 One last important thing to keep in mind is that before doing any comparisons, the volume levels of the amplifiers must be matched exactly. The human ears are super sensitive to difference in loudness, and a louder sound is always perceived as a "better sounding" one.

In order to align the volume levels, I use the T-Cable I crafted previously and a reasonably precise Agilent U1252B multimeter. Be sure to measure the voltage on both left and right channels. Not every single headphone amplifier I've tested featured precise match of inter-channel voltage levels. On some amps the left channel is louder, one some the right one. Make sure that the voltage levels of the loudest channels match (it doesn't matter if on the Amp A the loudest is the left one, while on the Amp B it's the right one).