The article "Intersample Overs in CD Recordings" on Benchmark Media raises interesting topics of intersample peaks, and DAC headroom. In short, this is what the article states:

So I decided to test the DACs I use on the subject of headroom, and also figure out what can be done to address the clipping problem without resolving to buying DAC2 or DAC3 converters.

Let's take some measurements. I don't have Audio Precision, so I was taking my measurements using an old trusty E-MU Tracker Pre connected to a notebook on battery power. In Audacity I created a 16-bit 44.1 kHz sound file containing 11025 Hz sine wave phase shifted to 45° and normalized to 0 dBFS.

BTW, generating this sine wave is not as straightforward as it may seem. The "Generate Tone" Audacity function unfortunately doesn't allow specifying the phase. The workaround is to use very powerful by not so straightforward "Nyquist Prompt" effect instead.

First, generate 10 seconds of silence (it will become selected automatically). Then in "Effect" menu choose "Nyquist Prompt", enter the following, and press "OK":

This will replace the silence with a 11025 Hz sine wave phase-shifted to 45°. Afterwards, normalize it to 0 dBFS by choosing "Effect > Normalize" and entering "0.0 dB" as the target value. The result should look like the left channel on the screenshot below (with "View > Show clipping" option enabled): 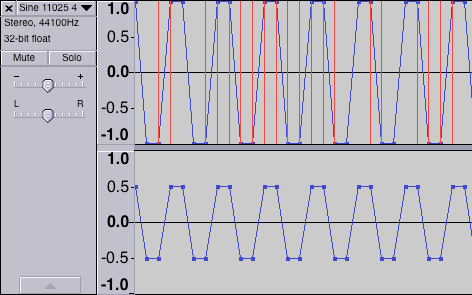 The red bars on the left channel warn us that these samples will overshoot 0 dBFS when rendered by DAC—that's because the "hat" of the rendered analog sine wave will connect these dots and thus will end up above the maximum value that can be represented using integer values.

Let's look at this sine wave in the frequency domain ("Analyze > Plot Spectrum" in Audacity): 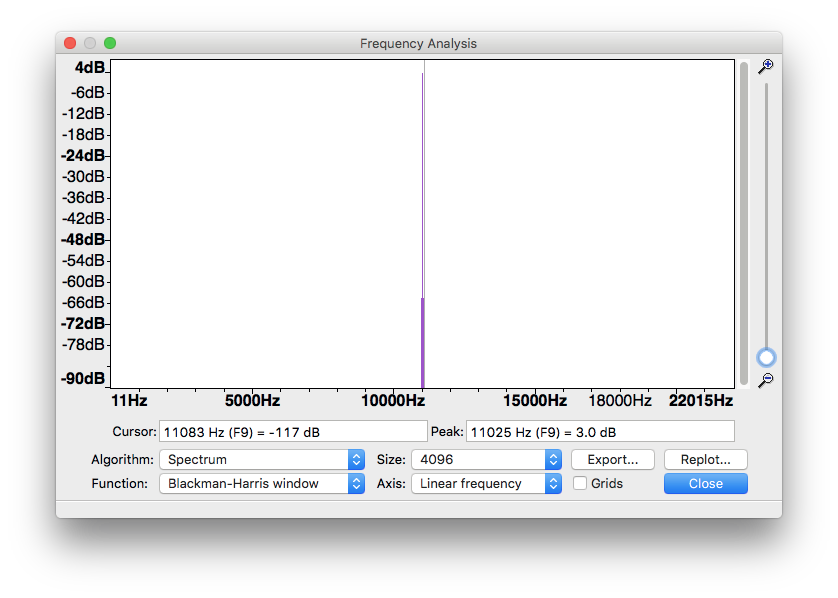 I have changed the default settings of the analysis panel to use Blackman-Harris window and 4096 FFT buckets. This provides the most accurate result for the sine wave. As you can see, the panel shows that the peak of the sine wave is at +3.0 dBFS.

For each of the DACs I tested I was using the following sequence of steps:

I started with Benchmark DAC1 since it is known that it doesn't provide headroom and will clip. And indeed it does: 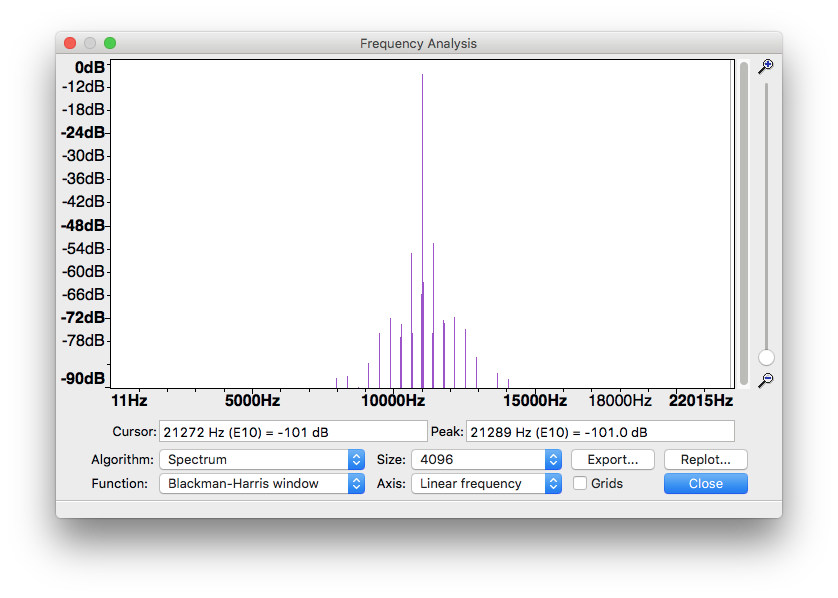 Note that E-MU's input sensitivity is not as good as of the Audio Precision frontend used by Benchmark Media for their post, so we don't see the noisy spikes below -90 dBFS, but the presence of extra spikes around the input signal frequency confirms that we indeed can detect whether the DAC clips by using this technique.

The next thing I tested was Objective DAC of JDS Labs make. It has turned out to be producing even harsher distortions: 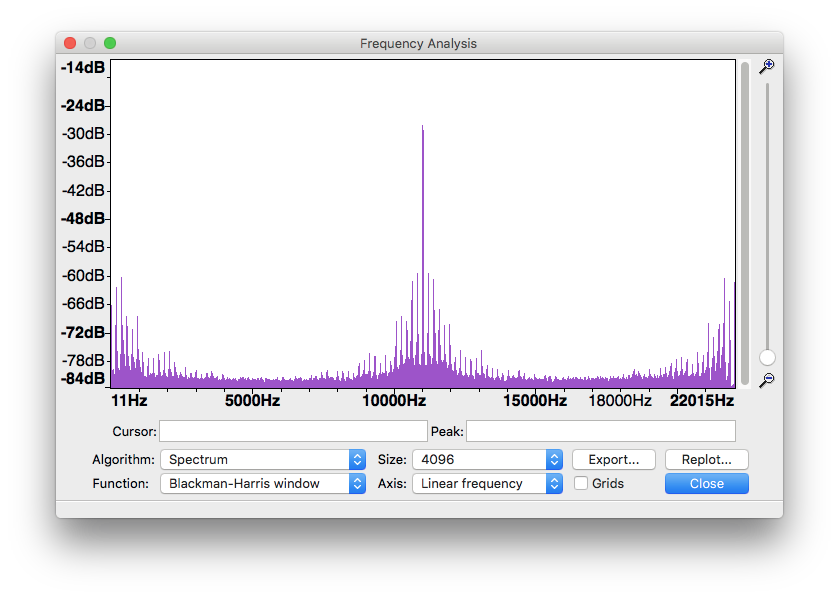 It was also interesting to find out that due to enormous distortions, the resulting 0 dBFS wave on the left channel was produced at lower level than quieter but having enough headroom -6 dBFS wave on the right channel. That's clearly a disaster.

Do all DACs clip?

Indeed, the results were a bit disappointing—the "audiophile grade" DACs are not very good at dealing with normalized CD recordings. Also, the following statement from the Benchmark Media's post seems to be leaving no hope:

Every D/A chip and SRC chip that we have tested here at Benchmark has an intersample clipping problem! To the best of our knowledge, no chip manufacturer has adequately addressed this problem. For this reason, virtually every audio device on the market has an intersample overload problem. This problem is most noticeable when playing 44.1 kHz sample rates.

I started testing the other DACs I had lying around:

And to my surprise, I found that none of them has the audible clipping problem! Look at the frequency analysis for MB Air (the only one among the listed that has shown any IHD at all): 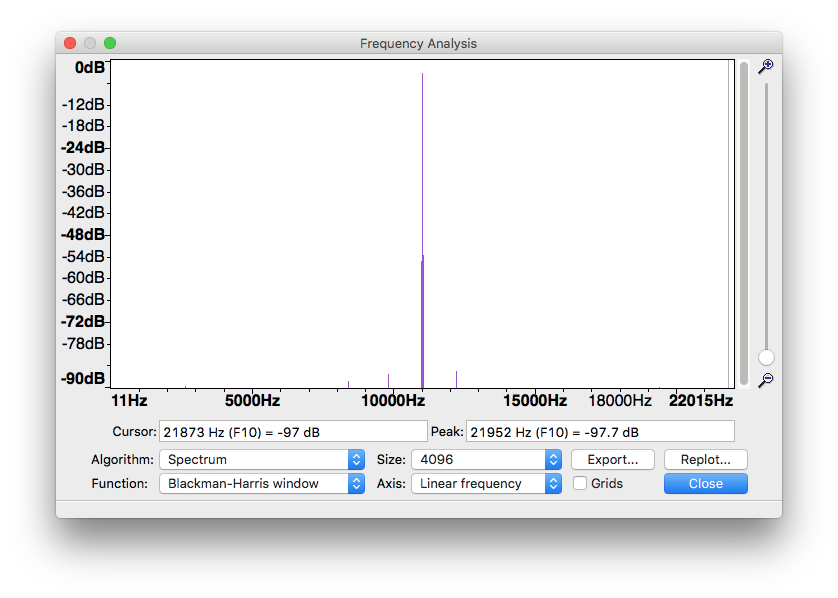 There are very minor (I would say, inaudible) spikes from IHD, but it looks much cleaner than the results of Benchmark DAC1!

The music production oriented sound interfaces (E-MU and MOTU) actually have no oversample clipping at all—they provide enough headroom. I guess most of the music pros oriented devices do, since during recording and mixing quite loud transients can be produced, and these devices need to handle them.

A bit surprising was the absence of clipping on the another version of Objective DAC (the Mayflower version). I don't have a good enough explanation for that except that the versions of ODAC they use are different:

But JDS Labs never mention that "revB" has added headroom, and in fact acknowledge that performance of the DAC at 0 dBFS level is slightly worse than at lower levels. So, still a mystery to me.

But what if you have a DAC that is subjective to clipping, like Benchmark DAC1 or an old version of ODAC? What I tried to do is first to reduce the output volume level on the VLC player—this reduction happens in the digital domain, and then, as a separate experiment—on the DAC itself using OS volume control provided by DAC as part of the USB Audio standard.

Not surprisingly, scaling the peaks below 0 dBFS by reducing the volume level at the player gets rid of distortions.

What's more surprising is that for ODAC reducing the volume level with OS volume controls (I've set them to -6 dB) also remedies the clipping. That was something new for me since my understanding was that USB Audio volume control would apply to the analog wave that comes out from the DAC chip. But it turns out that at least for ODAC, the chip itself scales down the input digital signal before processing it.

Benchmark DAC1 doesn't provide external volume control via USB Audio protocol, and the volume knob that it has applies the volume control in the analog domain to the signal that has left the DAC chip (already clipped), so it's not helping. The only option to avoid clipping with DAC1 is to use the volume control at the music player.

First of all, big kudos to Benchmark Media for raising awareness about the facts that DACs can clip intersample overs, and that a lot of music recordings actually have them.

But then I would like to steer away from their (not explicit but assumed) conclusion that you should only buy their DAC2 and DAC3 products if you want to avoid the clipping problem. In fact, using pro sound interfaces may be an answer, as well as simply reducing the output volume level. Just don't hesitate to test the resulting signals yourself.

After reading some docs on ODAC / O2 interconnection I have discovered that line out of my ODAC revB is accessible via the "line in" jack on O2's front panel (so it's actually a dual purpose jack—it can serve either as line input for O2 amp or as line output for ODAC—wicked smart!). And I have repeated my measurements on intersample clipping. Nothing changed however—the result look the same as the one recorded via O2's headphone output—no IMD distortions.