In my last post, I investigated clipping of intersample peaks that happen in DACs. But as I had started exploring the entire path of sound delivery, I discovered that digital sound data can arrive to DAC already "pre-clipped". And thus even a DAC with headroom will render it with audible inharmonic distortions.

The reason behind this is inevitable sample rate conversion when sampling rates of the source material and of the DAC do not match. Unfortunately, this happens quite often because during the evolution of digital audio multiple sampling rates come into use. The major "base" sample rates are 44100 Hz originating from CDs (Red Book Audio standard), and 48000 Hz coming from digital video. Plus, there are whole multiples of those rates: 88200, 176400, 96000, 192000 etc.

Having this variety, it's not surprising that sampling rate converters are ubiquitous. Without them it would be impossible to correctly play, say a 44100 Hz CD audio via a 48000 Hz DAC—the source audio will be rendered with wrong rate and will have incorrect pitch.

Had the source wave 44.1 kHz wave been normalized to 0 dBFS, the blue dots that currently have approximate values of 0.5 and -0.5 would be at 1 and -1, respectively. Thus, the values of the 48 kHz sampling would end up above 1 (or below -1). Which means if the converter is using integer representation for samples (16-bit or 24-bit), and doesn't provide headroom, it will not be possible for the converter to render those values, as they will exceed the limit of the integer. Thus, they will be clipped, and this will result in a severe distortion of the source wave.

The same thing can happen in a conversion from 48 kHz down to 44.1 kHz, or when upsampling from 48 kHz to 96 or 192 kHz. Basically, any conversion that results in emerging of new sample values can produce values that exceed the peak value in the source wave. The only potentially "safe" conversion is when the source wave get downsampled to a whole multiple, e.g. from 96 to 48 kHz, because this operation can be performed by simply throwing out every other sample. 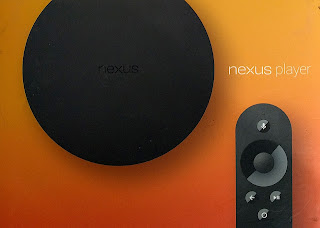 Here am examining sound paths that I have at home. Let's start with Google Nexus Player. It's a rather old thing, and I don't think it pretends to be a "Hi-Fi" player, but nevertheless I use it from time to time, and I would like to see what it does to sound.

This is my setup: the HDMI output from Nexus Player goes into an LG TV, and it separates audio via TOSLINK connection that goes into E-MU 0404 music interface, and then to SPL Phonitor Mini. As in the last post, for measurements I will be using E-MU Tracker Pre card connected to a laptop on battery power.

I use two sound files for test: one is the same as the last time (11025 Hz sine wave at 45° phase in a 44.1 kHz FLAC), and another is 12 kHz sine wave at 45° in a 48 kHz FLAC. Both files were uploaded to my Play Music locker. I'm aware that Play Music uses lossy 320 kbps MP3 on their servers, but for these simple sine wave files this generous bitstream is effectively equivalent to lossless. At least, Play Music doesn't perform any resampling.

Since TVs are designed to be used with video content, their preferred sampling rate for audio is 48 kHz. I haven't found any way to change that setting for my TV. So first in order to test the signal path, I played the 12 kHz sine wave file (48 kHz SR), and captured it from the line output of E-MU 0404 also using 48 kHz sampling rate on Tracker Pre. The result on the frequency analysis is a beautiful clean peak at 12 kHz with no distortions at all: 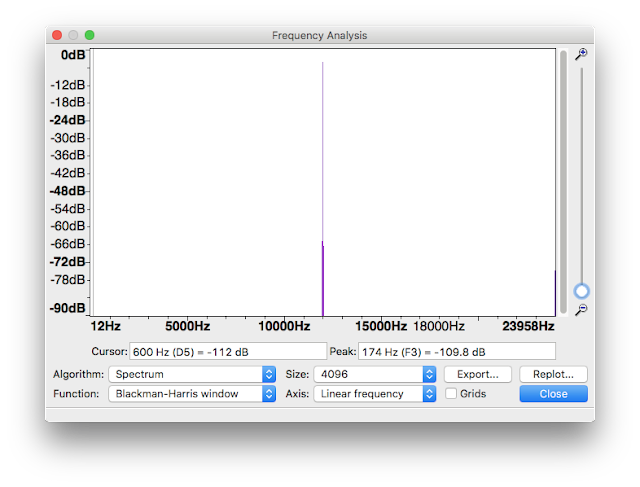 However, 48 kHz isn't the typical sampling rate for the content on Play Music store—since their source is CD content, most of the albums are using 44.1 kHz sampling rate. Even YouTube uses 48 kHz sampling rate audio as I have discovered (I've checked with VLC player, it can open YouTube video streams). Not sure about the sampling rate used in Play Movies, though.

So let's now play the 44.1 kHz sine wave file using the same setup. The only change I've made is setting the capturing sampling rate to 44.1 kHz on Tracker Pre. And the result is pretty ugly: 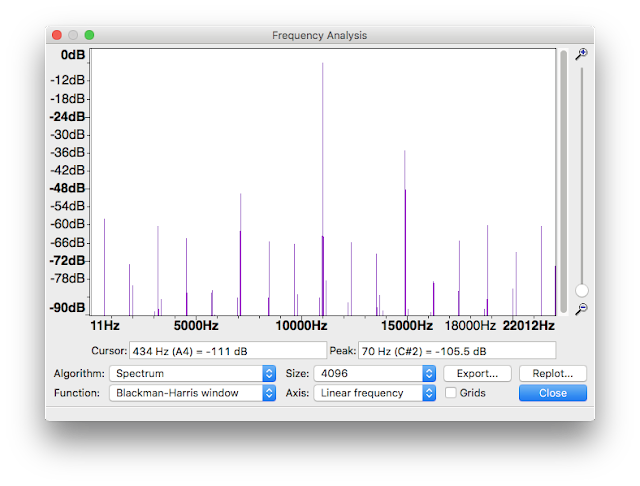 If I wasn't really happy about how the frequency analysis looked for Benchmark DAC1, this one simply made my hair stand. The resampler in Nexus Player clips severely. What's even worse, there is not much I can do about that, since there are no controls over digital attenuation or sampling rate. Too bad. At least now I know why snare drum on "Gasligting Abbie" by Steely Dan doesn't sound good when played via this setup.

I also have an old Dune HD player connected to the same LG TV. Unlike Nexus Player, Dune offers a lot of control over playback. It also supports FLAC format. Again, I started with playing a 12 kHz sine wave at 48 kHz SR just to make sure that the sound path is clean, and it was all OK.

Then I played a 11025 Hz sine at 44.1 kHz SR, and again got a lot of distortion (although the level of distortion peaks is lower than on Nexus Player): 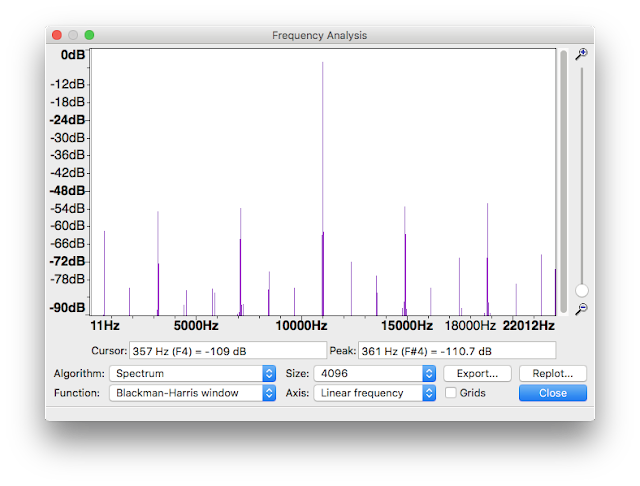 But here at least I can do something to fix that. I can't change the sampling rate, but Dune offers digital volume control, even in dB scale. I used it to reduce the volume by 4 dB down, providing enough headroom for the resampler, and the result is a beautiful clean 11025 Hz peak: 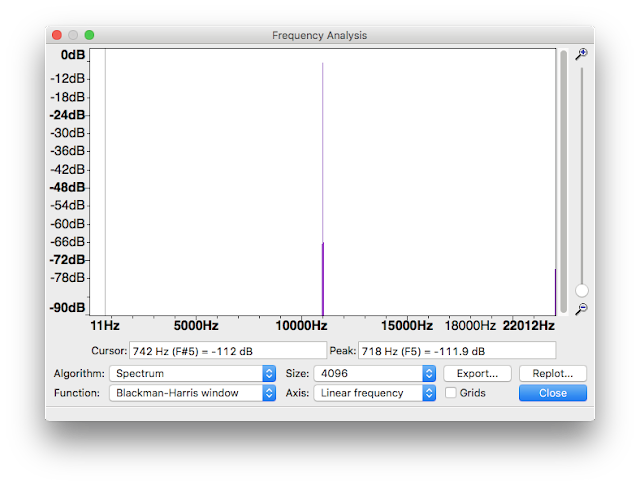 Great, now I have much more confidence in my setup.

By PC I mean Macs as well. On desktops and laptops there is a lot more control over the parameters of the digital audio signal path—it's easy to change the sampling rate on the DAC to match the sampling rate of the source material, also the majority of digital players offer digital attenuation. So there is no problem ensuring that nothing clips the digital signal on its way to the DAC.

Sampling rate converters are ubiquitous, and conveniently adapt the source audio stream to ensure that it will play regardless of the sampling rate set on the DAC. However, as we have found out, they are not transparent and can easily clip intersample peaks, thus producing audible inharmonic distortions.

To avoid that, make sure the sampling rates match between the played material and the DAC, or at least reduce the digital volume a bit to offer some headroom for the sampling rate converter.