I've built AMB's M3 headphone amplifier more than a year ago and I enjoyed it all this time. Judging purely from listening experience, I was quite sure that my build doesn't have any major flaws. Also, I was confident in the M3 measurements that Bob Katz has done for his unit. However, I decided to perform some on my own. As my measurement rig is not super precise, I decided to measure M3 side by side with a commercial headphone amp to have a better grip with reality. I've chosen SPL Phonitor Mini because I think it's in the same "weight category" as M3.

AMB M3 is a two stage amplifier, with the first stage based on opamps, and the second stage on MOSFET transistors (with big heat sinks!) Although formally the amp has Class AB topology, its enormous power allows it to stay in Class A for most of the use cases. Another distinguishing feature of M3 is "active ground"—that is, the ground channel also goes through the same amplification stages as left and right channels. Personally, I'm on the same side with NwAvGuy who said that it's not a good idea. But it's interesting to see what practical consequences this design choice actually has.

SPL Phonitor Mini is one of my favorite headphone amplifiers for a long time. Initially this was due to its awesome crossfeed implementation. Now that I've found some comparable DSP implementations, this is of a less importance. But I still enjoy Phonitor for its power, reliability, and the fact that it has both unbalanced and balanced inputs. Besides crossfeed, Phonitor has another feature—high-voltage rail (120 VDC), which helps to achieve low noise floor.

In my previous experiments I found that I can trust my measurements of frequency response, THD, channel balance, and output impedance. I put less faith into my IMD measurements, but for comparison between two amplifiers this should be OK. So this is the set I decided to stick with.

I learned that when measuring an amp with a driven ground like in M3 (or a fully balanced amp), the ground channel of the probe must be left floating. I'm not entirely sure about whether this only applies to mains-powered measuring equipment (mine isn't) or not. But just in case, I decided to stick to this method. And for consistency I decided to measure both amplifiers the same way. Also for consistency, I was using unbalanced inputs on Phonitor (that's the only input on my M3).

I let both amps to heat up for an hour before measuring them. For most of measurements, I set the volume level on both amplifiers to output 400 mV into a 33 Ohm resistive load using a 1 kHz sine wave. The line output of MOTU Microbook IIc was attenuated to -3 dBFS.

Here I was pleasantly surprised by superiority of M3. Below is graph of THD for 1 kHz sine, M3 is on the front, in orange, Phonitor is on the back, in cyan: 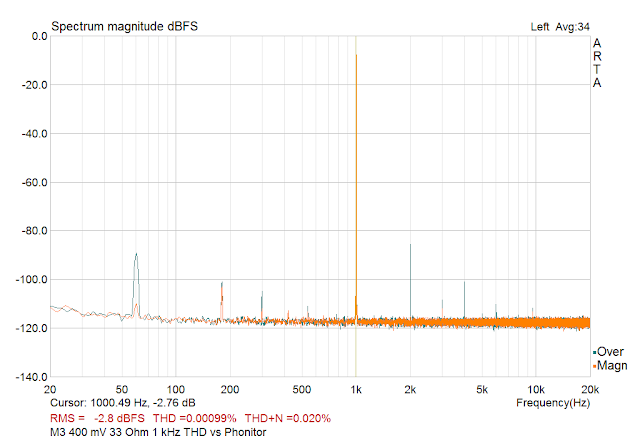 It can be seen that M3 almost doesn't have harmonic distortions from the test signal, and it's 60 Hz hum spike is at noise level. Here is the same graph with M3 alone: 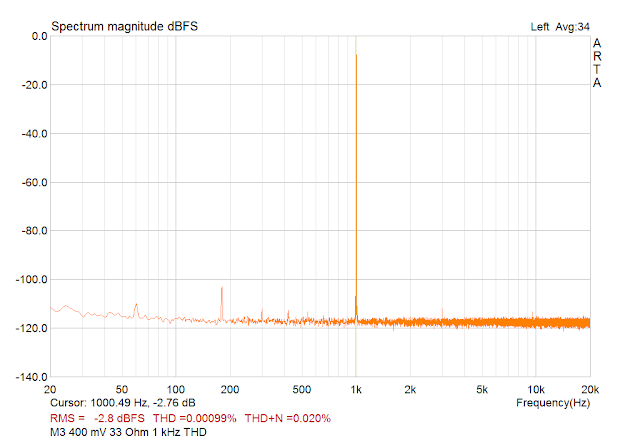 That's very impressive. Even considering that Phonitor's harmonics are below audible threshold, on M3 they are practically absent. It's interesting that on Bob Katz's graphs (here and here) the 60 Hz spike is more prominent. Perhaps that depends on the power supply?

The results for a 20 Hz sine are also very good, this is M3: 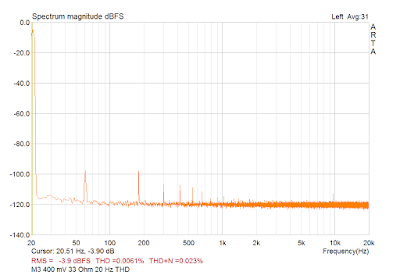 And this is Phonitor Mini: 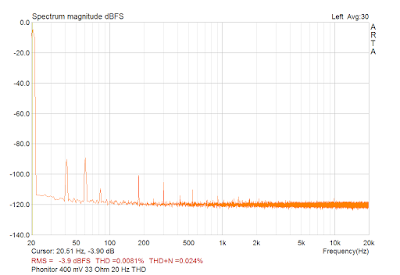 Apparently, 400 mV output level is a piece of cake for both amplifiers. I decided to crank them both up to produce 3 V RMS into a 33 Ohm load. Distortion levels are now noticeably higher in both amps, but still below audibility (again, M3 is orange, Phonitor is cyan): 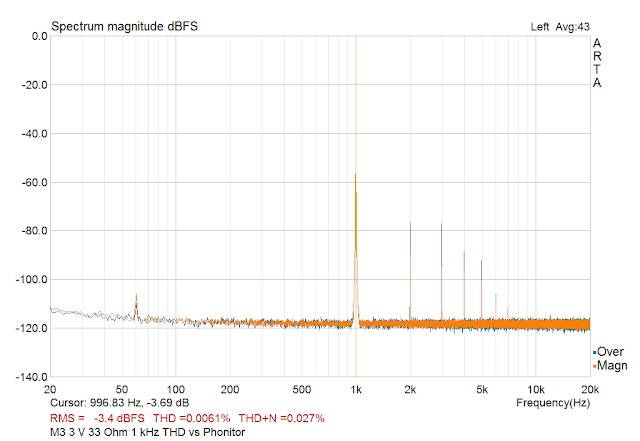 It's interesting to note that the level of THD of M3 at 3 V output: 0.0061% is still lower than Phonitor's level of THD into 440 mV: 0.0074%. That demonstrates how much power M3 has. And just a reminder, please don't rely on THD+N numbers on these graphs—they are quite high due to relatively high noise floor of my measurement rig. 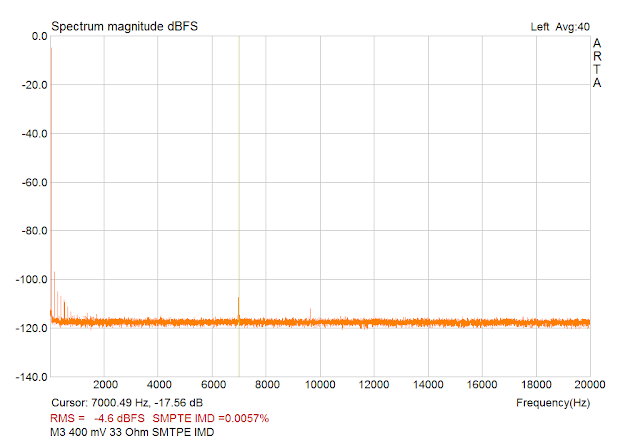 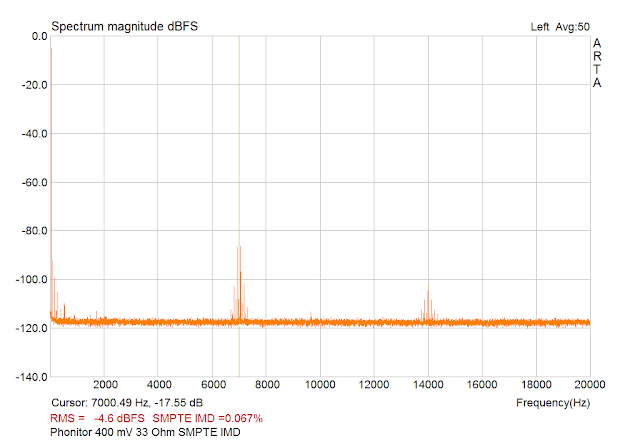 As we can see, there are a lot more sidebands on the 7 kHz signal caused by 60 Hz signal played along with it.

And here is CCIF IMD for M3: 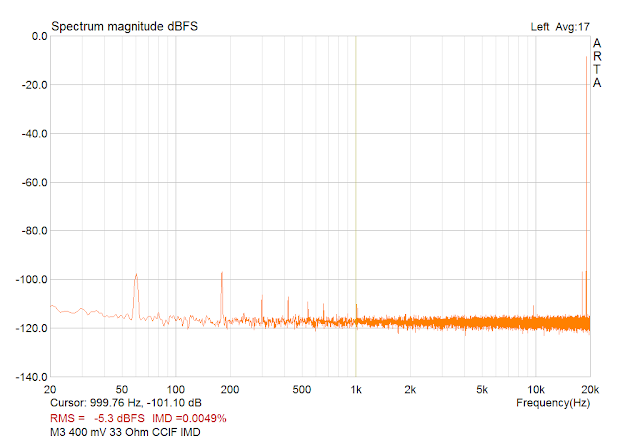 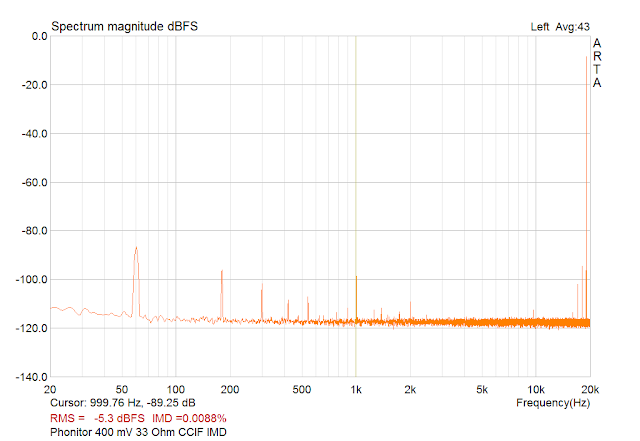 The 1 kHz signal—the result of interaction between 19 kHz and 20 kHz signals is more visible, although it's level is at -100 dBFS, which is inaudible.

I would not expect anything but a ruler flat response from both of these amplifiers, and indeed this was the case: 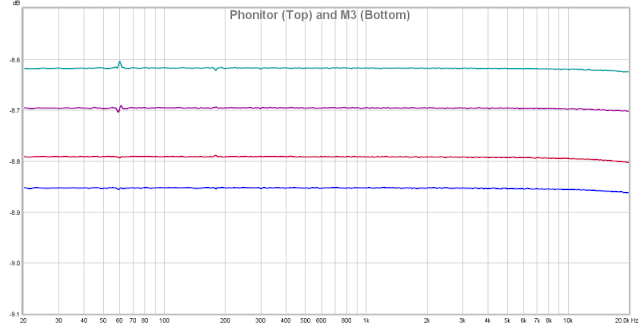 It's the only measurement where M3 has shown worse results than Phonitor. Here is Phonitor: 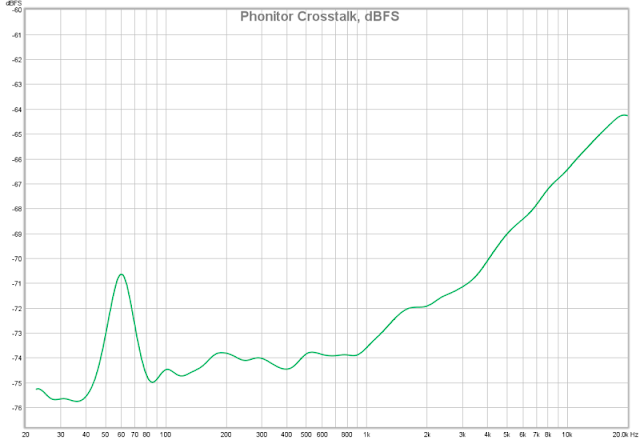 The crosstalk level stays at -74 dBFS until 1 kHz, and then climbs up to -64 dBFS. It's definitely better than Behringer UCA202 was showing. Now let's look at M3: 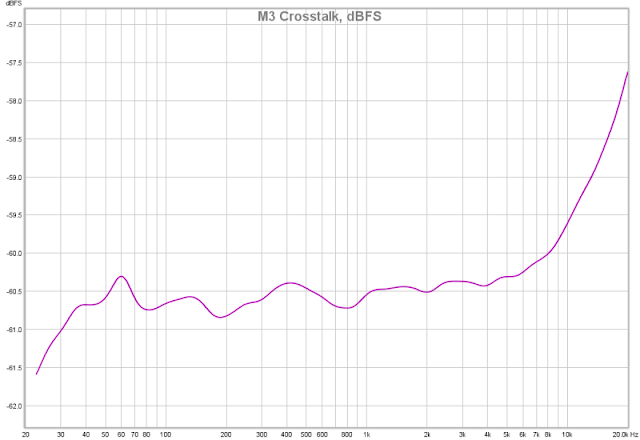 Here variation is less—within 4 dB, but the overall level is higher—at -60.5 dBFS. Why is that? Bob Katz obtained similarly high figure: -42 dBFS into 20 Ohm load. But the crosstalk was improving (becoming lower) as the load impedance was growing higher. Bob explains this with the fact that the driven (active) ground of M3 has output impedance.

Considering the worse absolute value, Bob says that anything better than -30 dBFS is insignificant. Thus, -60 dBFS isn't a big deal.

Another victory of Phonitor: 0.06 Ohm of output impedance versus 0.11 Ohm on M3. Although, I'm not sure this measurement has the same meaning considering the driven ground of M3.

M3 is a transparent amplifier. The absence of distortions is due to its enormous power capacity. I actually doubt that the driven ground has much influence on its performance. It would be interesting to build a version of M3 with classical passive ground channel. Like LXmini speakers, it's a great design that can be reliably built and provide consistence level of performance.