My Setup for Headphone Listening, Part 1

I listen to music on headphones a lot. This is my retreat from distracting noise that often surrounds me at work and at home. I don't normally use portable audio players or a mobile phone, instead I have what is called a "desktop" system: a computer, a desktop DAC, a desktop headphone amp, and closed over-ear headphones. At home, I also use a couple of pairs of open over-ears when it's quiet around.

When listening on headphones, I can notice more issues with the reproduction chain and in the recording, compared to listening on speakers. That's why I pay a lot more attention to details for the headphone setup. My goal here is to be able to relax and enjoy the music on headphones the same way I can enjoy it on speakers.

The hardware part of the chain consists of three components: USB DAC, headphone amplifier, and headphones. The criteria for choosing them is easy to formulate—be as transparent as possible. That means, adding as little distortions and colorations as possible, having precise inter-channel balance and low crosstalk levels. I tend to avoid doing any sound processing in the analog domain, relying on DSP plugins running on the computer instead.

As far as electronic components are concerned, it's quite easy to fulfill the transparency requirements. Any modern DAC with the price starting from $200 does the job. Here are some not very expensive DACs that I'm familiar with.

Cambridge Audio DacMagic series. The entry level models: DacMagic 100 and DacMagic Plus used to be expensive back in time of their introduction, but now have become cheaper because they don't handle DSD and MQA. So for people not interested in those formats these DACs now represent a good deal. Especially DacMagic Plus with its internal operating sampling rate of 384 kHz and selectable output filters. Ken Rockwell had published a very thorough review of this unit. Note that due to high impedance of the headphone output (50 Ohm), DacMagic Plus should not be used as a headphone amplifier, but rather only considered as a DAC.

E-MU 0404. This legendary external sound card of the past is now a bargain because it's not USB Audio Class compatible, and E-MU / Creative Labs have abandoned updating drivers for it, so it's not usable on modern OS versions. However, it has an SPDIF input, so it can be used as an SPDIF DAC driven by a USB Audio Class compliant pro audio card, or the optical output of the computer. For example, I connect it to my MOTU Microbook IIc which has a coaxial SPDIF output. 0404 only supports sampling rates up to 96 kHz over SPDIF. The other caveat is that an instance of an old OS (e.g. WinXP running in a virtual machine) is still needed in order to set up the sampling rate of this card. 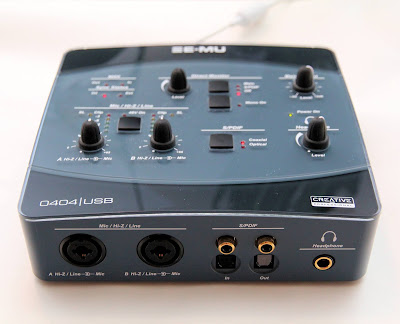 TEAC UD-301. A cheaper option than UD-5xx series. The UD-501 model was measured by Archimago and looks really solid. UD-301 used the same DAC chip, but doesn't have the option for selecting the type of the output filter.

Headphones are more tricky as there is no clear objective criteria on how headphones should sound like. I'm aware of Harman target equalization curve, but first, it's still under development, and second, not every headphone manufacturer follows it. Anyways, the frequency balance of the headphones can be corrected in the software chain, so the main requirement is about low distortion levels. Personally, I stuck myself with Shure SRH1540. I was also enjoying Beyerdynamic T5p until they broke. Both of those are closed over-ear headphones.

I've got some open over-ears as well: Beyerdynamic T90, Massdrop Sennheiser HD6xx, and AKG K240. These are all different sounding, with K240 being the most uncolored but also adding the most distortions, T90 sounding the most "airy", and adding extra high frequencies, with HD6xx being somewhere in the middle.

To summarize, I strive to have the reproduction chain as transparent as possible. I do not use tube amplifiers, for example. I know they can sound nice, but the distortions they add can't be taken out if needed. On the other hand, if the chain is transparent, it's easy to add any tweaks and "euphonic" distortions at the prior stage—on the computer.

The software chain starts with the music player. I'm not very picky about them. My primary sources are Google Play Music for streamed content, and Foobar2000 or VLC for grabbed CDs and high resolution (24/96) files.

The only thing I need to tweak in the player is to set its output level so it has headroom for intersample peaks. As it had been demonstrated in that post, a digital sound file can contain encoded sound waves that while being converted into analog would exceed the normal level of 0 dBFS. And thus, having slightly more than 3 dBFS of headroom is recommended. For the Play Music player this means setting the volume control two steps below the maximum output volume:

This provides attenuation by -6 dBFS (one step attenuates by -3 dBFS), which is more than enough.

For VLC I settled up with 82% of output volume (about -4 dBFS attenuation), and for Foobar2000, setting the volume control to -3.5 dBFS provides the necessary headroom. This is a very important step, as any further sound processing step could result in clipping, and distortions caused by clipping can't be removed afterwards.

The most important component of the processing chain is the plugin host. I use hosts that allow intercepting system audio or audio from a specific application. On Mac I use Audio Hijack. This is an easy to use and stable application that includes a kernel module for capturing sound output. I think it can only host AudioUnit plugins, but generally it's not a problem since all the plugin makers provide their modules in different formats.

On Windows things are more complicated. There is a free open-source app called Equalizer APO which installs itself as a filter for the selected audio interface. It can host VST plugins. However, I've got a couple of issues with it. First, it doesn't allow VST plugins to show their meters. Second, it crashed when I was attempting to add Redline Monitor—my current favorite crossfeed plugin. Since Equalizer APO is open source it should be possible to fix both of these annoyances, but I haven't got to this yet.

Instead, I found another plugin host app called "Virtual Audio Stream". It allows using 4 independent effect racks. In order to capture applications or system sound output, VAS provides virtual audio devices, but they are limited to 44.1 kHz. However, any other "virtual cable" device can be used instead. I use "Virtual Audio Cable", where the "Hi-Fi" version supports sampling rates up to 384 kHz. 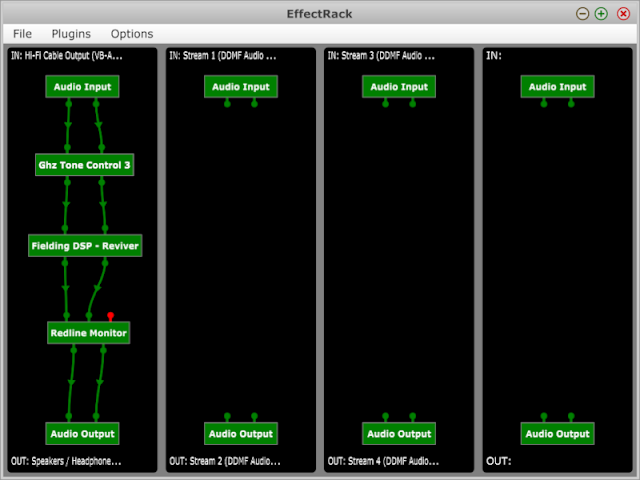 The next big topic is the list of plugins that I use with these hosts, and their settings. This will be covered in the next post.