What is Headphone Normalization

The world of headphones is a jungle. There are thousands of headphone models on the market, each with its own sound signature. Every aspect of headphone build affects the sound. A lot of headphone makers also come up with their own "sound style", e.g. having lots of bass, or a "bright" sound, or neutral "studio reference" signature which is preserved along the model range.

Several factors comprise the sound signature: frequency response, added distortions, degree of matching between left and right drivers. Unlike the world of loudspeaker makers, which is moving towards the acceptance that the speaker frequency response should be a smooth slope downwards from low to high frequencies, the world of headphone manufacturers is still struggling to figure out the standard for the frequency response curve. The main reason for that is the fact that unlike the sound from loudspeakers, the sound emitted by headphones bypasses several "body filters" on its way to the eardrum.

The sound that we hear from outside sources partially reflects from the shoulders, and receives significant coloration from the outer ear. Thus, a sound from a loudspeaker with ideally flat frequency response being heard in an acoustically treated room is actually far from "flat" when picked up by the eardrum. 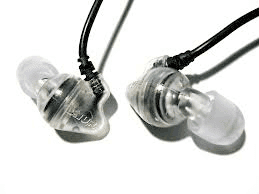 Now if we take in-ear monitor headphones that are inserted directly into the ear canal and radiate sound directly to the eardrum, and make their frequency response flat, what would be perceived by the listener is a sound with strongly attenuated vocals (because our outer ears do a great job of amplifying sound in the frequency range of vocals), not appealing at all. It had been understood that in-ear monitors thus need to have a frequency response curve that employs filtering applied by the shoulders and by the outer ear.

With over-ear headphones the situation is even more complicated because although they bypass the shoulders "filter", they still interact with the outer ear of the listener.

Here is where DSP normalization comes in. Since we listen to headphones via digital devices, we can put a processing stage before feeding the sound to the headphones in order to overcome the deficiencies of the headphones build, or to override manufacturer's preferred "signature."

I'm aware of two software packages that do such kind of processing: Morphit plugin by Toneboosters, and "Reference" package from Sonarworks. In this article I'm using Morphit because its functionality allows for more educational explanations.

Morphit is built as an audio processing plugin, so by itself it can't be applied systemwide. And it is not available on Linux. I was experimenting with it on a Mac by adding it to Audacity and applying it as a filter to sine sweeps.

Morphit has three modes of operation: "Correct", "Simulate", and "Custom". The last mode is the most adjustable—it allows to specify the source frequency response, the target response, and additional correction of up to 4 parametric EQ filters. "Simulate" mode is the same, but lacks the EQ filters. "Correct" mode is the simplest one—it sets the target frequency response to "Generic studio reference". I will be using "Custom" mode as the most robust one.

On the UI, Morphit shows the correction curve, not the target. But it's easy to see the target curve as well—we need is to set the source EQ curve to flat, and the corresponding setting is called "Generic flat eardrum". So, here is how we can see what "Generic studio speaker" target setting looks like: 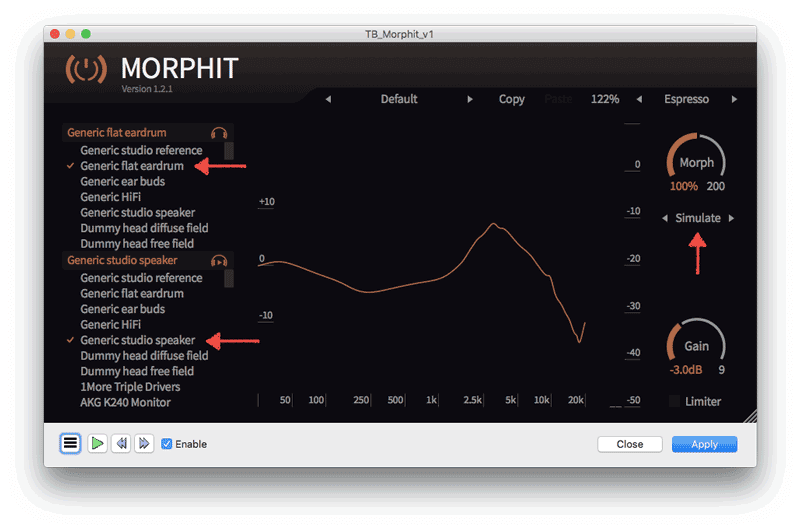 The only problem with the Morphit's UI is that it lacks any grids and an ability to overlay the graphs. Fortunately, we can do that in FuzzMeasure by importing the processed test signals. Here is what we get for "Generic studio reference", "Generic HiFi", and "Generic studio speaker": 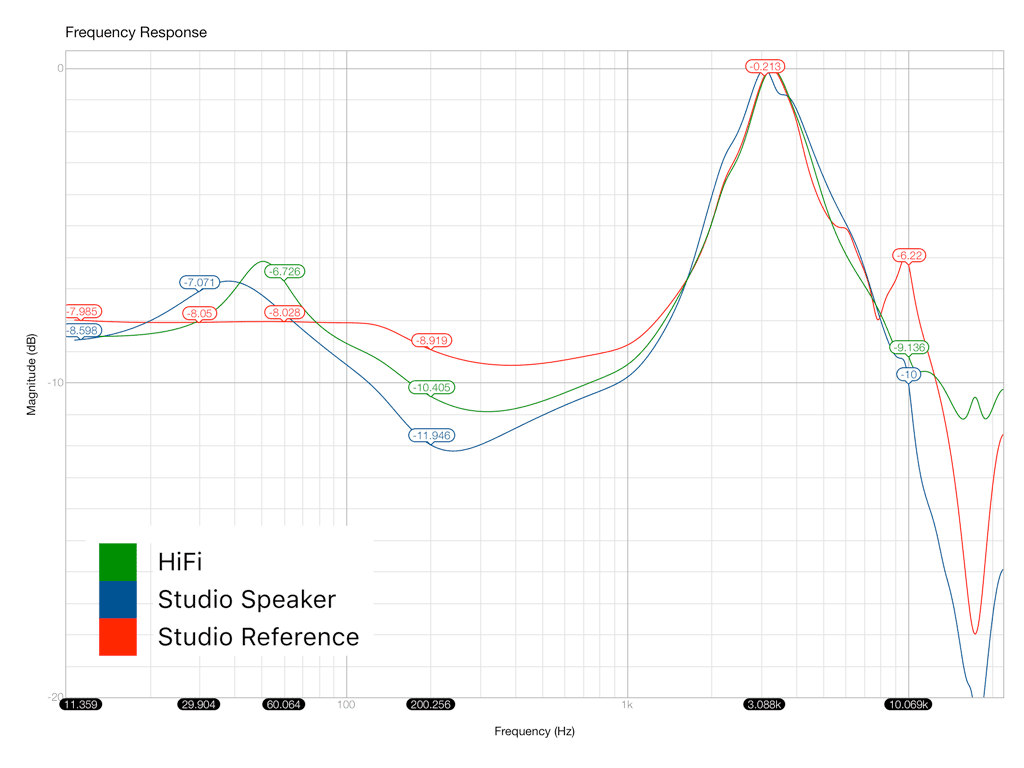 The curves certainly have some similarities: low frequencies stand out above the middle range, there is a prominent peak at about 3 kHz, and after it the high frequencies start to roll off. These characteristics resemble what is known as "Harman Target Response for Headphones", and it is thoroughly dissected by the headphone expert Tyll Hertsens here. I would like to compare the attenuation values between the curves of the Harman TR, and the ones on the graph. Note that in Tyll's article the level at 200 Hz has been chosen as the 0 dB reference point, and for comparison I had offset Morphit's curves to the same level.

In his article, Tyll suggests some refinements to the Harman curve:

As it can be seen, those are very similar to the differences that we can see between the "Studio Speaker" and "Studio Reference" curves. Plus, the "Studio Reference" curve offers a flat LF line from about 110 Hz and below and shifts the main peak a bit to the left: from 3.1 kHz to 3.3 kHz. The "HiFi" setting sits somewhere in between, and doesn't have the sharp rolloff at HF.

I performed blind testing using Shure SRH1540 headphones comparing the "Studio Speaker" and "Studio Reference" settings, and the latter was sounding better on most of the test tracks. The only drawback is that on some tracks the amplification of the 6–12 kHz region can sound too bright, adding harshness to "s" and "t" sounds. This can be heard very well on tracks "Little Wing" by Valerie Joyce and on "Hung Up" by Madonna. This is the same drawback that I experienced when listening to MBQuart 400 and Beyerdynamic T90 headphones. But with other track this brightness is usually well perceived by myself.

Note on the Implementation

I haven't found an explicit confirmation, but it seems that Morphit uses a recursive (IIR) filter. First, the plugin has only about 3 ms latency and second, the phase profile of processed waves is the same as in recursive filters that I've built myself in order to replicate Morphit's curves.

Do All Normalized Headphones Sound the Same?

I would not be expecting that despite that we are equalizing the frequency response of several headphones to the same target response. As I've mentioned in the very beginning, there are more additional parameters that define the "sounding" of particular headphones. One is the level of distortions that headphone's drivers introduce—they can change timbres of instruments by adding extra harmonics. Another is how well the drivers are balanced—this affects imaging.

As a simple experiment, I took 3 different headphone models: AKG K240 Studio, Sennheiser HD6xx (Massdrop version of HD650), and Shure SRH1540, then normalized some samples of commercial recordings to the same target curve for each of the headphones, and listened through.

The tonal balance has indeed been aligned. For example, K240 initially being very neutral, after normalization also started displaying excessive brightness of Madonna's "Hung Up" For all headphone models, the vocals have become much clearer.

But despite this sameness, I could still hear the individual characteristics of these headphones. K240's comparatively narrow soundstage didn't change. SRH1540 were still showing somewhat stronger bass than two other models due to closed earcups, and so on.

So there is no magic in normalization, it can't make bad headphones sound like the best ones, but it can be useful in situations where it is needed to remove the sound colorations added by the manufacturer to express a certain "sound signature".