Why I Don't Save Filtered Samples as 16-bit PCM Anymore

When I need to evaluate a filter on a set of samples of commercial music in CD format, I used to render the filtered results into 16-bit PCM. The reasoning I had behind that is somewhat rational:

But as it turns out, the last statement is actually wrong. In the audio world, there is no single "standard" way for converting ints into floats and back. This is a good writeup I've found on this topic: "Int->Float->Int: It's a jungle out there!"

The first suspicions had started crawling into my mind when I was doing bitwise comparison of filtered results obtained from Audacity, Matlab, and Octave, for the same input sample, and using the same filter. To my surprise, the results were not quite the same.

By the way, the bitwise comparison is performed trivially in Audacity using the following simple steps (for mono files):

Another option is to check the spectrum of the resulting wave using Analyze > Plot Spectrum... dialog. If there is no difference, the spectrum window would be empty, otherwise some residual noise would be shown.

Note that it is very important to convert into 32-bit, because if the wave stays in 16-bit mode and there are samples with the minimum 16-bit value: -32768, upon inversion they will turn into max positive 16-bit value which is +32767. And summing them up with their counterparts from the original non-inverted track will produce samples of value -1.

So, when I was comparing filtered wave files processed in different systems with the same filter, and saved in 32-bit float format, usually there was no difference (except for Octave—as it turns out, even recent distributions of Octave, e.g. v4.2.1 are affected by this bug which saves into 32-bit integer instead of floats, and also stores 1.0 float value as minimum negative 32-bit value: -2147483648, instead of max positive). But once I started saving them in 16-bit format, the difference started to become quite noticeable. Why is that?

First, let's determine how Audacity, Matlab, and Octave deal with converting between minimum and maximum float and int16 values.

In Audiacity, we can generate a square wave of amplitude 1.0, which in 32-bit mode will be a sequence of 1.0 and -1.0 interleaved, like here: 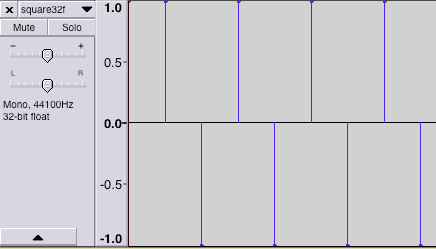 After exporting it into a 32-bit float PCM wav file, it can be examined with "octal dump" (od) utility:

After exporting the same wave into a 16-bit int PCM wav file, it is possible to see the same values represented as int16:

Now Matlab R2017b. After loading the square wave from a 32-bit file, it's easy to display it:

Then it's easy to export it into 16-bit again, and check how will it be represented:

OK, that means, Audacity and Matlab use the same range for int16 representation: from -32768 to 32767. What about Octave (v4.2.1)? The result of loading the floating point wave is the same, but what about the export into int16?

Interesting—it turns out that Octave only uses the range from -32767 to 32767, for symmetry I suppose. It's even more interesting, that if we load a 16-bit wave file produced by Audacity or Matlab into Octave in 'native' mode, that is, without converting into float, Octave will "scale" it in order to avoid using the value of -32768:

Personally, I find this quite odd, as I was considering the "native" loading mode to be transparent, but it's actually not.

So, obviously, this discrepancy in the range of int16 used can be the source of difference when performing bitwise comparisons. Can there be another reason? Yes, and it's the way fractional values are rounded.

For float numbers used in calculations, there is a variety of rounding rules. I've made an experiment—created floating point wave files with series of steps, and converted them into int16 using Audacity, Matlab, and Octave. For the step, I used different values depending on what range the framework uses. Thus, 1 unit ("1u" in the table) can be different for the positive and the negative range. The results are quite interesting:

It seems that all the frameworks use slightly different rounding rules. That's another reason why the wave looking the same in the floating point format will look differently when rendered into int16.

Never use 16-bit PCM for anything besides the final result for listening. And then also use dithering. For any comparisons, and for bitwise comparison, always use floats—they turn out to be less ambiguous, and retain consistent interpretation across different processing software packets.