Initially I was planning to do the next post about my measurements of FiiO E5 headphone amplifier—another attempt to "calibrate" my measurement rig against NwAvGuy's Prism dScope, but I've got sidetracked by another project.

It was long time ago when I've learned about loudspeakers designed by Siegfried Linkwitz. His promise is to deliver a great sound in conditions of untreated domestic rooms. Sounds challenging, and his speaker designs depart greatly from traditional "boxes." One particular model—LXmini looked very unusual—made from plastic drain pipes, with drivers positioned orthogonal to each other. I've got a chance to attend a demo at Burning Amp festival, and they indeed sounded quite nice to me. 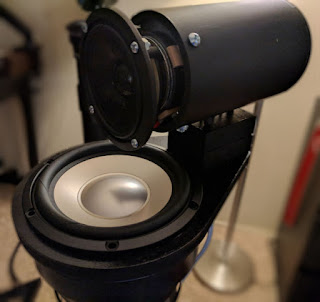 I bought build plans for LXmini, but was endlessly procrastinating actually building them. Finally, I've made an effort—ordered the kit from Madisound and bought the rest of parts at Home Depot. Building took several days mainly because I had to paint the parts, wait until they dry out, then glue them together, then wait again. I've made the speakers in black. Here they are: 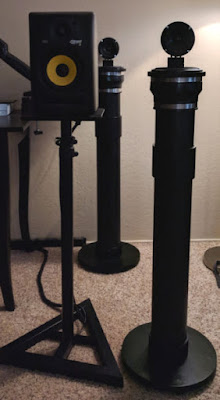 Compared to powered monitors on stands they look less bulky, giving back to the room the sense of space.

All of Linkwitz designs use active crossovers based traditionally on miniDSP boards (there are of course variations due to DIY nature of this project). With this approach, each speaker driver requires its own amplifier, so for the pair of speakers I had to provide 4 channels of amplification.

The choice of half-rack width amplifiers has turned out to be not very wide. I've found some models from pro audio equipment makers: Atlas, Crestron, Parasound, QSC, and Stewart Audio. All of them were class D—not surprising because heat sinks that are required for delivering this amount of power via class AB would never fit into the half-rack format. But I wasn't afraid of class D amp, as my JBL LSR305 monitors use them, and I can't see any difference from class AB amplifiers in KRK Rokit G5.

I've chosen SPA4-100 from QSC. It was matching my requirements exactly, and the specs state very flat frequency response. It isn't cheap though—costing above $800, but QSC is a well known brand of pro amplifiers, so my hopes were for good quality and long term reliability.

This is how it looks in my rack: 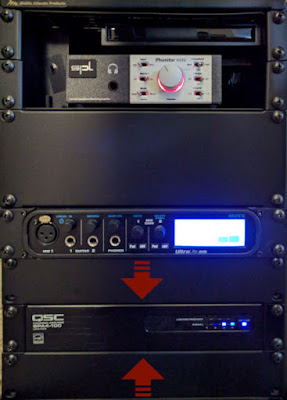 I decided to put LXmini at the front, replacing my KRKs. I also decided to try to get rid of my center channel because the speaker (E3c) had a non-uniform frequency response that was quite hard to correct, and I could always distinguish it by ear from other speakers. This left me with a bit unusual 4.1 configuration. However, it's not the infamous "quadro" setup, but rather the traditional 5.1 layout, just without the center.

Since LXmini require an additional DSP which has a non-negligible delay, I used REW to make sure the speakers are time aligned with each other. This process is based upon frequency response measurement, and when I looked at the measured FR I was pleasantly surprised how well the speakers are matched: 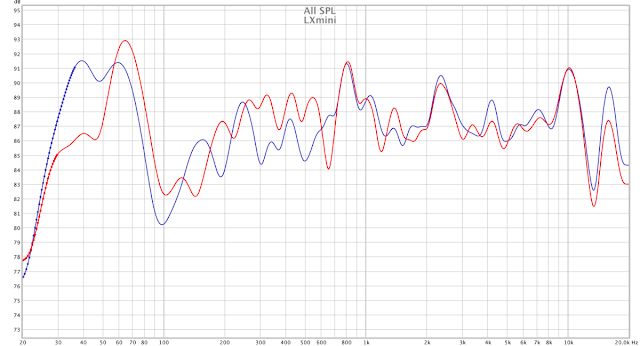 The graphs use "psychoacoustic" smoothing. Obviously, the irregularities at low frequencies are due to room modes. Judging by the right channel (red), the natural roll off of the speakers starts at 50 Hz. BTW, I've configured my audio chain that I can drive LXminis either on their own in stereo configuration, or as part of surround setup with subwoofer. These graphs are for the stereo configuration.

The interesting thing about LXmini is that unlike traditional designs, they have quite low crossover point—around 700 Hz, and the full frequency range above is covered by the top speaker. Thus, the top speaker in LXminis is properly called "full range", not "tweeter."

Then I ran LEDR test. In short, it's a synthesized signal that exploits HRTF in order to achieve 3D positioning of the test sound in order to help evaluating "imaging." In a room-speaker system with tamed early reflections and reasonably flat FR playing this test signal produces a remarkable effect of a sound moving in an arc in different planes, including vertical one.

Previously I tried this test with my JBL and KRK speakers set as fronts. The KRKs were producing a more realistic picture, although the perception of vertical movement was quite weak. With JBL, everything was smeared. In fact, even a simple test of playing pink noise through both stereo channels wasn't producing any sensible phantom center image with JBLs. That's why some time ago I put them to rear channels position where they do their job better.

The key to understanding why all those speakers have different ability to resolve the sound stage in my room lies in the character of their interaction with it. From my previous comparison of my JBLs with KRKs I know that JBLs have wider dispersion, due to the construction of their high frequency horn. And LXmini has the narrowest radiation pattern—dipole (figure 8).

My listening area is not symmetric, with a wall and a large book shelf on the left side. I do have space behind the speakers, and on the right side. Due to the reflective surfaces being close on the left, I always have to compensate for additional sound energy there by slightly reducing the volume level of the left speakers (yes, the for the rear one, too). Another issue with the room is that the ceiling is quite low—2.4 meters (8'). Though, there is a large sofa with cloth cover and the floor is carpeted, creating some natural sound absorption.

Apparently, there are lots of reflections in my room. The question is, how harmful are they for the sound localization cues. A good hint for answering this question is provided by the Energy Time Curve graph. Here is a very good introduction from Gik Acoustics on how to interpret it. Bob Katz's book "Mastering Audio" also contains useful information about the ETC.

Let's look at the ETC graphs for LXminis in my room (listening position, the first 30 milliseconds): 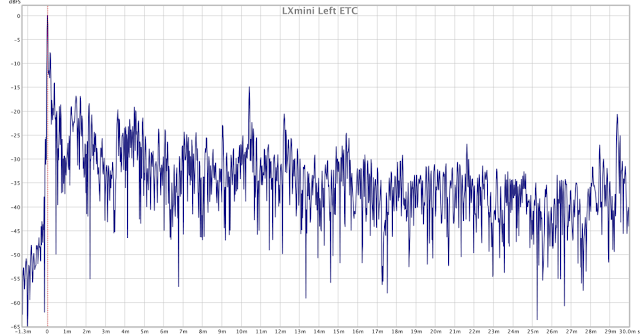 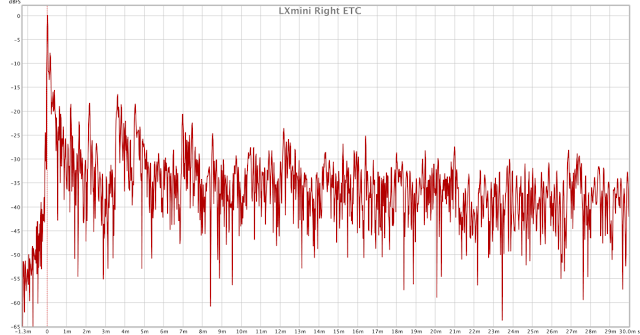 I would say, they look really good. The initial impulse decays to almost -20 dB during the first millisecond. And all the reflections arriving within the first 30 ms are below -15 dB. That's an exemplary performance for an untreated room. For comparison, this is how ETC graph looks for my KRKs: 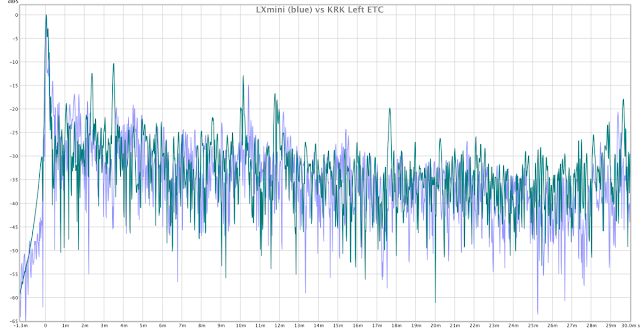 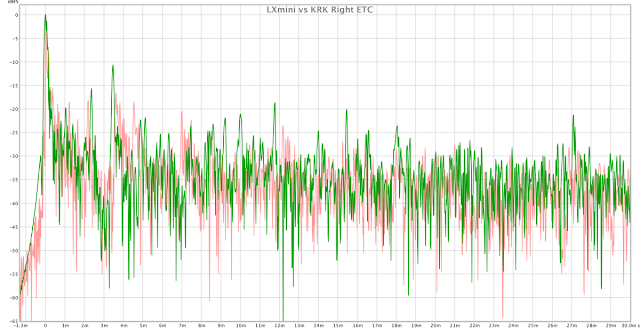 I left the LXmini graphs as shadowed plots for comparison. Here we see much stronger reflections arriving within the first 5 ms. They must be caused by wider radiation pattern. Some of the sound radiated to the sides immediately reflects from a closely positioned surface and reaches the listening position almost together with the main impulse. For the JBLs the situation is even worse:

Here we see series of strong reflections arriving within the first 5 ms, and also that later reflections are stronger. I'm pretty much sure this is due to much wider radiation pattern of JBLs.

But don't get me wrong, I'm not saying that JBL LSR305 is a bad speaker—no, it's in fact a good one, especially considering its price. It has a flat frequency response and very good directionality. It's just not for a room where reflective surfaces are located close to it. I'm sure, in a more spacious room, or in an acoustically treated room where strong early reflections are eliminated, it will sound great and will not have any problems with imaging.

In fact, even in my room these JBLs work great as rear speakers, due to their proximity to the listening area. In this case, their direct sound dominates over any reflections and they sound very true to life.

LXmini is a fantastic speaker for a small untreated room due to its narrow radiation pattern. The phantom center image created by a stereo pair of LXminis is so strong that I've got rid of my center speaker in surround configuration.